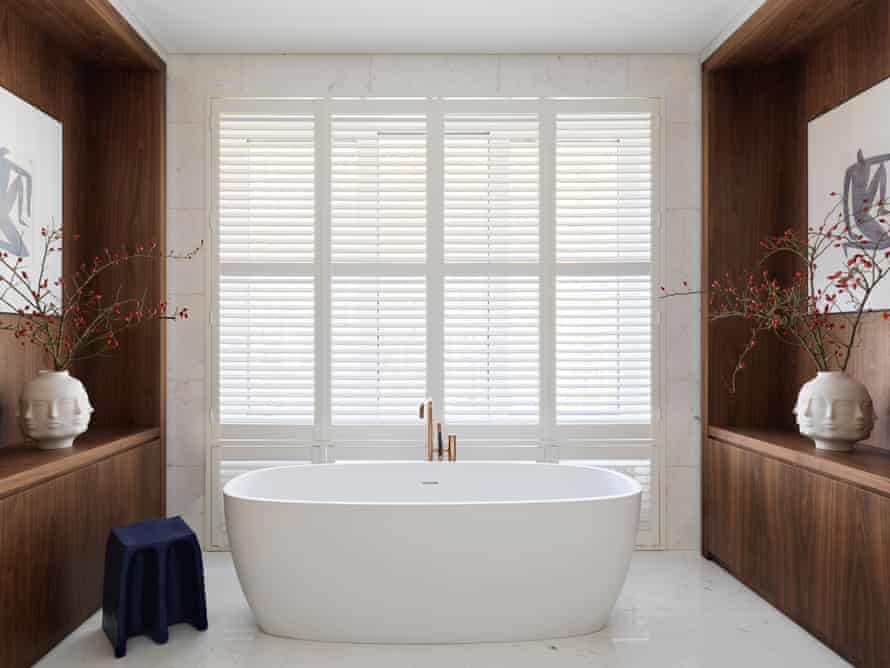 W.When the couple Alexander Kozlov and Anastasia Blagodarnaya bought a plot of land on the border with a pine forest south of Moscow, they first suggested building a wooden house on it. “I said, ‘Never, never,” recalls Kozlov. “When I’m in a traditional dacha, I don’t feel good. I have the impression that I’m being attacked by mosquitoes or something!”

He’s not a big fan of nature either, in sharp contrast to Blagodarnaya, who maintains a vegetable garden. “I go there in the evening to get herbs for the salad,” she says. She also loves hiking in the woods and looking for mushrooms. “The surroundings are still very untouched, which is becoming increasingly rare in Moscow. We don’t even have trails in the forest. “

Working and playing: the surprisingly peaceful office and studio space in the hallway and the spiral staircase that leads to an attic filled with toys. Photo: Stephan Julliard

The couple met in the mid-2000s at a design company called Vozrozhdenie, which means “renaissance” in Russian. His signature style was extremely classic, and Kozlov (known as Sacha) still remembers the very first project he worked on – a 300 square meter house in Moscow with red velvet, gold, and heavily decorated wallpaper. When he started his own company in 2010, he continued a similar traditional path. However, when he and Blagodarnaya came to build their own house on the forest property, he was eager to work in a more contemporary way.

The result is a joint venture. “Sacha was the brain, I was the heart,” says Blagodarnaya. “We made most of the decisions together. I trust him and his style 100%. If he’s certain that something will work, I know it will work. “She dreamed of a house with large windows that were bathed in natural light. He didn’t want curtains and an open river on the first floor. The rest of the process was pretty organic. “We took it step by step,” says Kozlov. “We did one thing, analyzed it, and then decided what to do next. It was very different from working with clients where you have to give a presentation at the beginning – when things change, people are not happy. “

Kozlov originally thought of adding wood paneling and decorative wallpaper in the bedrooms. “That was my classic background that came back to haunt me,” he laughs. “Every time Nastia said no.” Instead, they agreed on all-white walls, concrete floors, and slim walnut mills. Blagodarnaya likens the meandering bookshelves on either side of the fireplace in the living room to caterpillars.

The look is fresh, graphic and dramatic throughout. The entrance hall is dominated by a striking zigzag staircase. “I didn’t want a railing; I wanted it to swim, ”says Blagodarnaya. It leads to a landing where Kozlov set up his office. His current projects include a 600 m² multi-brand store in central Moscow, a minimalist lake house about 90 minutes away and the renovation of a house in Dundee from 1831. 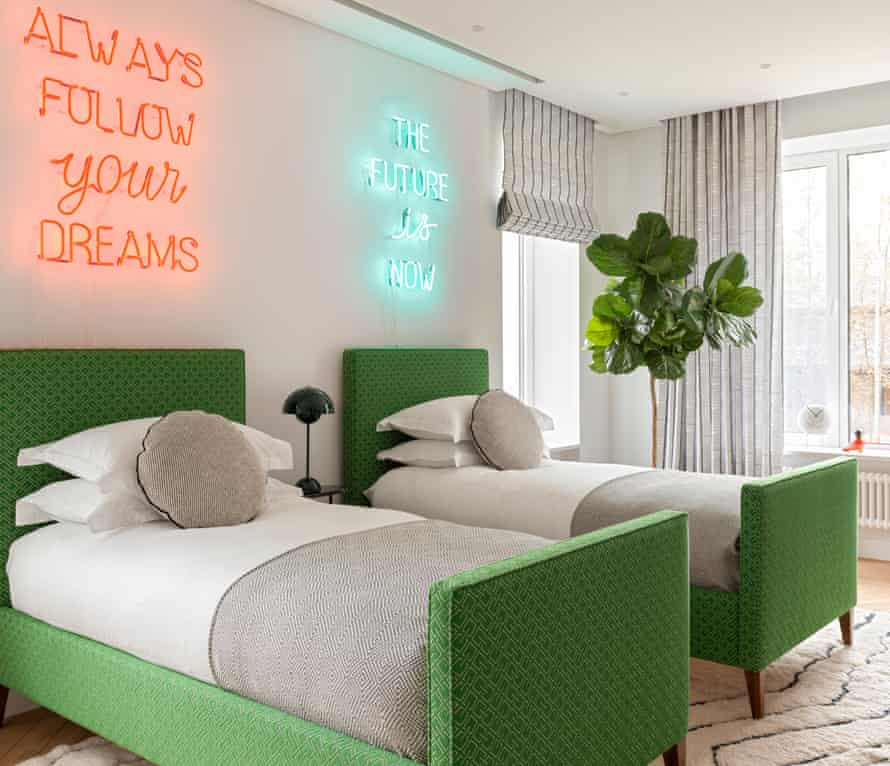 Green dreams: The house is full of bright colors, like these beds and the works of art in the nursery. Photo: Stephan Julliard

“During the last lockdown, I spent most of my time at my desk,” he says. “People may think there isn’t a lot of privacy as they imagine they are in a hallway. But actually our two young sons are in the playroom on the ground floor the whole time and nobody is up there. “The office also has a special meaning for Blagodarnaya. Some of the books on the shelves used to belong to her great-grandparents.

A hidden door in the middle leads to a guest room, while a spiral staircase provides a space in the attic that houses the boys’ train set and also for Lego sessions for families (in the past they built a mini version of the Taj Mahal). On one side of the landing, the master bedroom is accessed via a super-chic walk-in dressing room with a pair of orange, modernist slipper chairs. The other is the boy’s room, which is dominated by a couple of neon signs above each bed. One lights up red and reads “Always follow your dreams”. the other declares in blue that “the future is now”. 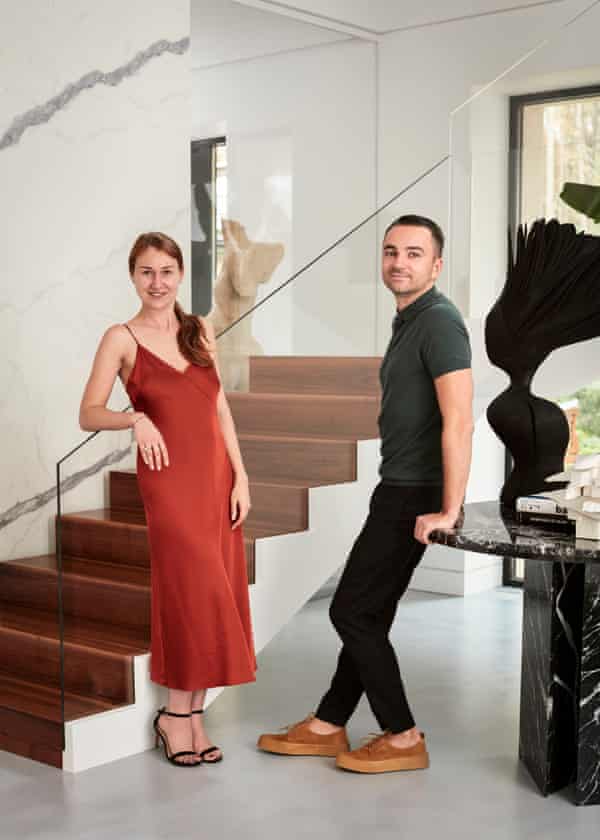 A particularly important room was the master bathroom. “We wanted it to be not only practical but also fun,” says Blagodarnaya. Some elements of its decoration would not look out of place in a living room. On either side of the freestanding bathtub are two walnut niches decorated with a pair of almost identical monotypes by the Russian artist Tatiana Laponkina. There is also an armchair in the room. The shower is now equipped with sauna and hammam functions. “When I suggested we have it, Sacha said he would never use it, but he does,” laughs Blagodarnaya. “And before we moved into the house, he didn’t bathe. But now he’s there every weekend. “

The color palette in the bathroom is downright low-key, but there are plenty of vibrant colors elsewhere in the house – the tomato-red amorphous chair in the office, the bright yellow painting in the living room, and the adjacent multicolored picture of Hollywood Boulevard 2017 by Australian-born photographer George Byrne. And both Kozlov and Blagodarnaya’s favorite objects in the house are equally eye-catching – the emerald green sofas that Vincent Van Duysen designed for Molteni. “I’ve always dreamed of having green sofas,” she says. “It really is my color.” However, their appeal goes beyond chromatic considerations. “They’re so deep they’re almost like beds,” she adds. “You’re perfect for a nap.”