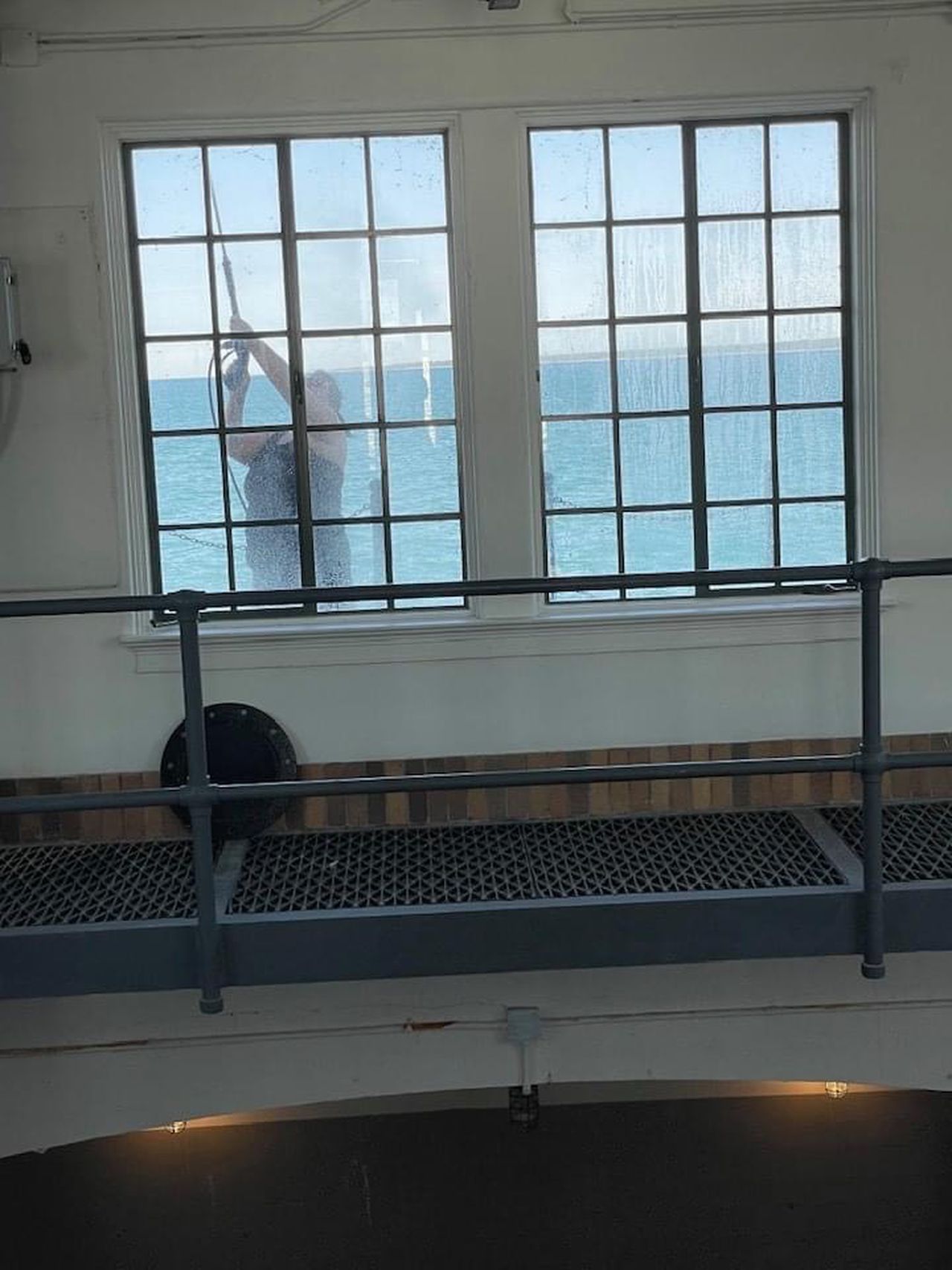 DETOUR VILLAGE, MI – As far as maritime traffic goes, DeTour Reef Lighthouse is in its high season now. A steady stream of freighters pass this waterfront sentinel with its automated flashing light that marks the DeTour Passage at the northern edge of Lake Huron. It’s where crews on big ships heading up the St. Marys River to reach the Soo Locks and Lake Superior are motoring by their counterparts aiming south for the Lower Great Lakes. DeTour Reef Lighthouse is the backdrop to this upbound-downbound ballet.

While it might be in a bit of a remote spot – sitting in the water a mile south of the Upper Peninsula’s DeTour Village mainland – it’s not a lonely place in the summer. The DeTour Reef Light Preservation Society, the nonprofit group that cares for the lighthouse, has a volunteer keeper program that allows people to sign up for overnight stays in the summer. It also offers visitors guided daytrip tours of the lighthouse that include a boat ride, a little exploring and a lot of information about this piece of working Great Lakes history.

But before any of these seasonal trips can get underway, DeTour is visited early each summer by “The Ladies on the Light.” This all-women cleaning crew has the strenuous and sometimes spider-filled job of cleaning the big lighthouse from top to bottom each year before the tourists arrive. They bring order to the untidiness found in the lantern room all the way to the lower level.

This summer, the work was done in June. It meant staying a couple nights on the lighthouse while they power washed the outside and buffed 876 panes of window glass inside and out, until they sparkled. It also meant taping their clothing tightly at their wrists and ankles so the hundreds of spiders that had taken up residence on the outside of the lighthouse and its window casements didn’t hitchhike home with them.

Yes, you read that right. While the lighthouse interior had already been fumigated, spring cleaning meant washing the outside – and dislodging hundreds of spiders, their nests and their newly-hatched babies that were all comfortably clinging to the tower’s exterior.

“The spiders had taken up residence all over the outside,” said Candis Collick, who has supervised the Ladies on the Light crew for years. “We started counting and we think we got up to 12 distinct species. All of them were in egg-laying mode and their nests were filled with eggs or filled with hundreds of hatching babies.

“The women I bring with me have to be fearless. We scrub from the very, top to the very, very bottom, and every single window inside and out. This year involved just getting covered in spiders while we were doing it.”

Powerwashing the deck and the 83-foot tower are all part of the season-opening cleaning. Kathi Bell is shown working the power washer on the “Poop Deck.” This year, the crew had to tackle hundreds of spiders on the exterior. Photo provided by Candis Collick.

Collick , who lives on nearby Drummond Island, has been involved with the lighthouse’s preservation society for more than 20 years. For the last eight years, she’s worked as the chair of the all-volunteer cleaning and prep group. As part of this work, she makes an initial trip out to the lighthouse each season without the cleaning crew. She takes stock of the overall condition inside and out, makes a list of missing items, inventories things that might need to be replaced, like mattresses on the beds in the living quarters. This way, her whole team is ready to get to work when they arrive for the two-night, three-day cleaning session.

This year’s “Ladies on the Light” cleaning crew led by Collick included Kathi Bell, Laura Lambert, Beth Lewis and Collick’s daughter-in-law, Marlene Collick. Boat captain Meade Gable made sure they got to and from the lighthouse safely.

There’s a lot of upkeep when it comes to a 90-year-old lighthouse. Known as “The Gateway to Superior,” the light was first lit atop this 83-foot structure in 1931. After its light was automated in 1974, signaling the departure of its last U.S. Coast Guard crews, it sat empty for more than a decade. In 1997, the U.S. government declared it excess property, creating a way for the nonprofit group to scoop it up the following year.

Window washing is a big chore at DeTour Reef Lighthouse. Photo provided by the Ladies on the Light.

GETTING DOWN TO BUSINESS

The volunteer keepers who now rotate in and out during each season are supposed to keep up with basic housekeeping duties, but Collick shakes her head at how they sometimes leave the inside of the lighthouse.

“Ideally, the keepers would be very conscientious of keeping the light dusted and cleaned and organized. Some years, we have great keepers. Other years, it’s like it was this year and I’ve never seen it dirtier.”

Once the Ladies on the Light arrive for their work detail, they not only handle the cleaning and organizing, but they take care of the mechanicals. They get the septic system up and running for the season. Ditto for the reverse osmosis water system. They check the electrical system and make note of any lights that might need to be repaired, or plaster work that needs to be done. Contractors are hired for the larger jobs, when needed.

During this season-opening cleaning, the women stay overnight in the lighthouse. Sleeping quarters are snug, and the group is entirely alone, far from the mainland and connected only by a marine radio.

Do they hear things at night in this old lighthouse? Sure.

“We do hear lots of things,” Collick said. “We have been told the lighthouse is haunted. The group of women that I go out with, we all just kind of laugh it off.”

During this most recent trip, Collick sat bolt upright in bed at 4:30 one morning because she very clearly heard someone shout “Hey you!”

“We had been boarded before by curious people, so I grabbed a spotlight.” Was it a ghost? Nope. “I had two seagulls out on the deck talking to each other.” Cleaning the deck is an all-hands job on DeTour Reef Lighthouse. Photo provided by Candis Collick.

There is at least one room in DeTour Reef Lighthouse with some stories attached. It has a hatch door where two parts of the building are joined together. When the U.S. Coast Guard still manned the lighthouse, there are accounts of Coasties sneaking local women onto the light, then hiding their dates in the hatch-door room if their supervisor returned unexpectedly, so they wouldn’t get caught.

“We call that the creepy room,” she said. “That’s where people say they hear all kinds of different things.”

When it comes to the Ladies on the Light, the only thing they raise their eyebrows at is bad weather. “We’ve been stuck out here before because of weather,” Collick said. While working at the lighthouse, they monitor the marine radio for any incoming storms, or increasing waves that would make it hard for them to board the boat back to the mainland. But they can make a quick departure when they need to, like this year.

“I saw a front rolling through,” she said, noting that she called their boat captain around sunrise. Five-foot rollers were slapping at the lighthouse base. “He came out at 7 a.m. and we were off the light by 7:20,” she said.

Want information on how to be a volunteer keeper at DeTour Reef Lighthouse? Check the nonprofit’s website here.

There are also daytrips out to the lighthouse. See the website here for details.