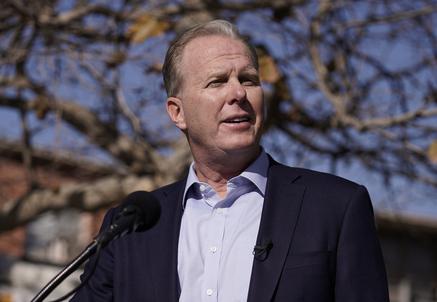 SACRAMENTO — The campaign to recall Gov. Gavin Newsom entered its final stage Friday as the window closed for candidates to enter the race.

Dozens of Californians had expressed interest in seeking to replace the first-term Democrat before the 5 p.m. deadline, but a definitive picture of the field won’t emerge until next week, when the Secretary of State’s Office is set to release a certified list of candidates.

It looks to be a smaller group than in 2003, however, when 135 people ran in a special election in which then-Gov. Gray Davis was recalled and Arnold Schwarzenegger was chosen to replace him.

The state’s online campaign finance portal showed 82 candidates had filed statements of intention to run by late Friday, including 33 Republicans, 18 Democrats and 31 with other or no party preference, though there could be more that were not yet uploaded. Some of those also may not qualify or follow through with all of the necessary paperwork to appear on the ballot — one of them, Mary Carey, a former adult film actress who finished 10th in the 2003 recall, announced Friday that she was dropping out of the race and moving to Florida.

To run in the Sept. 14 recall election, a candidate must be a citizen, eligible to vote and never have been convicted of certain felonies related to public corruption. They must have submitted, among other requirements, between 65 and 100 nomination signatures, a $4,194.94 filing fee (or in lieu of paying that, 7,000 signatures) and five years of federal income tax returns.

One candidate you won’t see on the ballot is Newsom himself. Voters will be asked two questions: Should Newsom be recalled? And if so, who should replace him?

If a majority votes yes on the first question, then whoever receives the most votes on the second question will serve out the remainder of Newsom’s term, which ends in January 2023, even if he or she doesn’t win a majority. The governor cannot run as a replacement candidate for himself.

The top rivals are all Republicans, some of whom have been running active campaigns for months already.

They include Kevin Faulconer, former mayor of San Diego and a favorite of the GOP establishment that believes that a more moderate candidate is the best route to winning in liberal California; John Cox, a San Diego County real estate investor who lost to Newsom in 2018 and has been traveling the state with a live bear and an 8-foot ball of trash; Caitlyn Jenner, the former Olympian and reality television star, who has grabbed national attention but has yet to offer a vision for governing the state; and Doug Ose, a Sacramento-area business executive who served three terms in Congress.

Several more hopefuls jumped into the race over the past two weeks, after state officials formally called the election: Kevin Kiley, a state legislator from the Sacramento suburbs and a vocal critic of Newsom’s during the coronavirus pandemic who wrote a book about recalling him; Ted Gaines, a member of the Board of Equalization who is the highest-ranking Republican in a state government dominated by Democrats; and Larry Elder, host of a nationally syndicated conservative talk radio show who would be California’s first Black governor.

None of them has the star power of Schwarzenegger, who was one of the most popular actors in the world when he was elected governor in 2003. But in the absence of a single bold-name draw, recall organizers believe that an array of demographically and geographically diverse candidates could pull their effort over the finish line, with each contender appealing to his or her own niche of the electorate.

“The more the merrier on the number of candidates,” said Anne Dunsmore, campaign manager for Rescue California, one of the groups behind the recall. “It creates stakeholders. What are they doing? They are identifying their target and they are getting them engaged.”

No major Democrats have announced plans to run. Of those who filed statements of intention by Friday, perhaps the most notable is Kevin Paffrath, a Realtor and YouTuber with almost 1.7 million subscribers.

Democratic leaders pushed to keep candidates out of the race, hoping to avoid a repeat of 2003, when Davis’ lieutenant governor, fellow Democrat Cruz Bustamante, ran as a backup, urging voters to oppose the recall but vote for him on the second question. Some Davis supporters blamed Bustamante for making it harder for the governor to mount a defense.

“It was a confusing message to communicate to voters,” said Robin Swanson, a Democratic political consultant. “It’s a really hard triple-bank shot that you’re trying.”

While the lack of prominent Democratic alternatives bolsters Newsom’s strategy of dismissing the recall as a partisan attack, it could backfire if he loses, giving California a Republican governor for the first time in more than a decade. The most recent public polling showed a majority of voters opposed recalling Newsom. But it also found that Republicans, who overwhelmingly favor removing him from office, were far more engaged in the race than Democrats, who make up a larger share of the electorate.

Swanson said the field of replacement candidates — which she called “a fairly predictable list of middle-aged white men” — was unlikely to present a serious risk to Newsom.

“If California voters wanted something different, they’re not being offered that with this,” she said. “You’re not choosing from a lot of different flavors.”