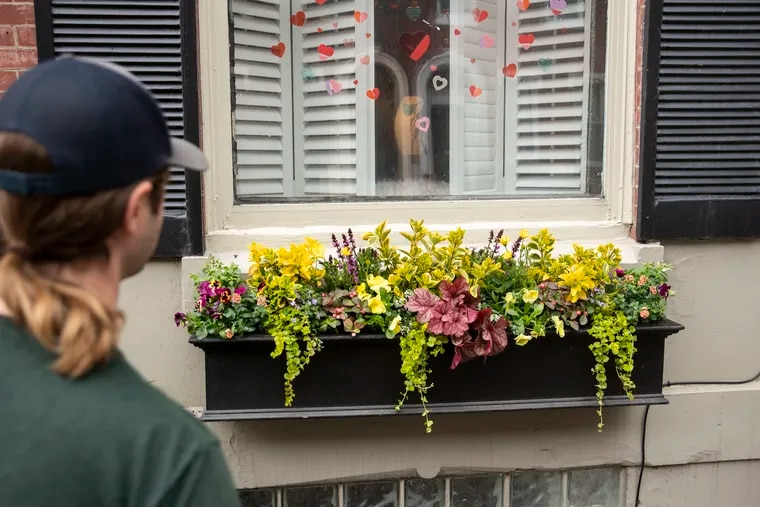 Nancy Brago and Kelly Durost arrived home on a spring day to find a surprise. The two window boxes on the first floor of their rowhouse were filled with greenery and flowers: ferns, coleus, blue pansies, purple petunias, and burgundy-leafed white begonias.

A “Spring Care Instruction” flier left in one window box read, “We have added new soil and time released fertilizer to your containers to encourage fresh grown and bountiful blooms” and added, “Water your plants every other day. Consistent watering produces even more blooms and impressive growth.”

The women were delighted but confused. They had not hired anyone to plant their window boxes.

Every year, in early June, Brago plants the window boxes herself with an arrangement of geraniums and other annuals, adding spikes (dracaena) for height.

The handwritten note on the other side of the flier explained:

“Hello! We planted your window boxes by accident when we came for your neighbor. They are yours if you would like them! We hope you have a great rest of your spring! Best, Enliven Planters.”

The next day when the women went outside they discovered Enliven had returned to their Spring Garden block and planted their next door neighbor’s window boxes with an attractive display of different flowers.

Paul Kawoczka owns Enliven Planters in East Falls with Dan Nichols. He said that in the nine years Enliven has been in business, it has filled 20,000 planters and window boxes with blooms and, “we only got the address wrong twice.”

The mix-up that happened five years ago did not concern Brago and Durost or their neighbor. All the boxes were beautiful.

In the last several years, the number of window boxes in Philadelphia’s rowhouse neighborhoods has proliferated. They adorn homes from river to river, and from South Philadelphia to North Philadelphia.

The trend dates back ancient times, when Romans in a crowded city grew herbs and vegetables in terra cotta containers.

The pandemic only increased interest in gardening. For urbanites with no or minimal backyards, window boxes and planters have satisfied the yearning to cultivate.

Busy homeowners can sign up for a subscription service and have boxes planted with appropriate materials four times a year: in the spring, summer, fall and in December when boxes are filled with evergreens, pine cones, and bright berries. On its website, Enliven lists a charge of $165 to fill one 36-inch window box. There are extra charges to supply and install boxes.

The prices seem reasonable, Kawoczka said, to former suburbanites used to paying hefty fees for lawn care, planting and mulching and plowing snow from driveways in the winter.

Graham Kinsman of Kinsman Garden Co. in Pipersville said he has seen an increase in sales for the popular hayrack window boxes such as the kind Nancy Brago uses.

Originally designed as feeding receptacles for barn animals to feed themselves, hayrack-style planters are constructed of metal bars welded together to form a rounded or flat-bottomed basket. Kinsman said his hayracks last for 20 years or more and come in a wide range of lengths for any windows or railing. The thick plastic coating over the steel bars protects against rust.

Early hayrack planters were lined with chicken wire and moss. Nowadays, they are lined with porous coco fiber, which is good for the plants, Kinsman said.

Prices for hayracks with brackets and liners start at less than $50. Fiberglass and PVC boxes, like the kind sold on flowerwindowboxes.com, are more expensive but can be painted to match house trim, doors, and shutters.

One material professionals won’t use is wood. “It rots,” Kawoczka said.

Carrington will install irrigation systems for clients who have window boxes on all three floors of their homes. In her Belle Vista basement, she propagates plants under lights and grows plants for customers in her backyard. She also rents space in the Horticultural Center in Fairmount Park.

Professional planters discuss pricing and flora preferences with clients and create designs to complement the architecture of a home. Sunlight is considered. Some planters keep an eye on the boxes during the year, replacing flowers that have died and repairing damage, possibly at an extra cost.

Carrington wishes more customers would ask for herbs and edible ornamentals such as red kale, whose color deepens in cold weather. She wants the boxes she tends to look attractive, even in winter, and plants small evergreens, which last year round. She said they are the “bones” to which she will add flowers and foliage when the weather warms.

Sheila Jamison-Schwartz, who does her own gardening, tried to create her own window bounty this year. “Sadly,” she said, “my window boxes did not winter well.” Still, the dwarf Alberta spruce she purchased from a local Ace Hardware did flourish. Jamison-Schwartz, who shares her Spring Garden home with her husband, Stuart, also shops for plants at Lowe’s and Home Depot and at Primex Garden Center in Glenside.

By late March, maroon-leafed coral bells (heuchera) were perking up from her two window boxes and purple blooms on the dead nettle (lamium maculatum) “make me happy,” she said. The pansies from Ace Hardware she added for more color helped, but she acknowledged that this early in the spring “my window boxes are far from where I want them.”

A few blocks north, Kawoczka and his crew leader, Max Hartt, were planting a window box in Brewerytown.

Kawoczka did not have to check the address. Homeowners Gene and Hillary Curran have been subscribers to his seasonal service for four years. Gene said he and his wife don’t give Enliven specific requests. “We trust their creative eye.”

Hartt cleaned out the 60-inch box, replenished the soil, and began planting. He dug a hole in the center for a large heuchera, which he flanked with purple pansies, peach-colored diascia, pale-green creeping jenny, pink-berried gaultheria, trailing yellow pansies, and white alyssum. Behind those plants he positioned pink snapdragons, purple, and yellow osteospermum, golden edged euonymus, and purple salvia.

“Plants will fade in and out,” Kawoczka said, “but there should always be something in bloom.” As spring progresses, he said, “the plants will double or triple in size.”

In her wanderings through the neighborhood, Sheila Jamison-Schwartz, for one, finds inspiration in her neighbors’ window boxes.

“Living in a rowhouse where every front looks the same,” she said, “I try to make a little difference. I really enjoy walking all our streets and eye boxes for ideas.”