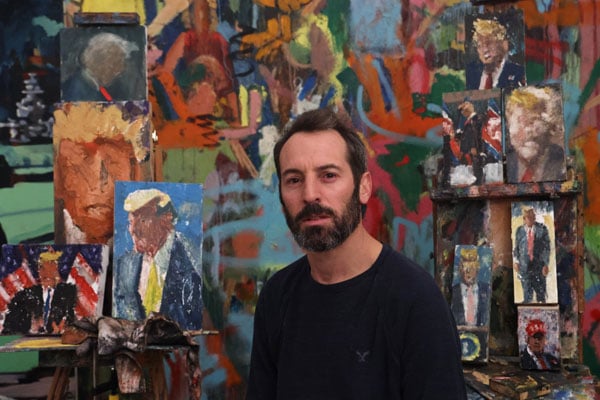 The face is dark and grim, but the blonde comb and tie leave no doubt that the picture carpeted by the Israeli painter Iddo Markus’ studio is that of Donald Trump.

“Let’s start with the fact that I don’t like him,” emphasized the casual artist.

Markus with his short beard and piercing black eyes said that he was still fascinated by the now “tragic figure”.

The walls and floor of his studio in the northern port city of Haifa are full of portraits of the former American president.

When the billionaire presented his candidacy for the 2016 presidential election, the Israeli artist said he couldn’t believe it.

Then, when Trump was finally elected, he said he was shocked, even “disgusted” by the “way Republicans” treat people and minorities.

But he couldn’t tear his eyes away from the man with the “orange face and yellow hair” whose image and laconic prose flooded television and social media for more than four years.

His hastily painted first painting of Trump was followed by around 120 other oil paints on canvas and wood.

They show a man with a contorted face, but whose silhouette is immediately recognizable.

“The first pictures were much more colorful and faster,” said Markus, who attended an art school both in his native USA and in his current home in Israel.

But he said the character took on a more “pathetic” appearance after Trump’s supporters raided the US Capitol earlier this month and after his election defeat to Democrat Joe Biden.

“Now I feel like a tragic figure,” said Markus. “He became a complex person instead of a picture instead of an icon.”

“The way he holds himself was different after he lost,” he added, saying that “he is human and understands that something has changed”.

“Before, I really felt like he thought he was God.”

Markus named the portrait series “The Apprentice” after the reality TV show that contributed to Trump’s popularity.

He said one of the works was purchased by an American who wanted to remind “how deep” US politics could go.

In his overcrowded studio, the walls of which were covered with sketches, cut-out photos and stains of color, Markus readily admitted that his fixation was not just reserved for Trump.

“I’m obsessed with everything I do,” he said.

Repetition is part of his practice – for a series he created around 1,000 works based on a childhood image of his wife and painted them on small wooden squares or even huge canvases over a period of five years.

And painting Trump “was an interesting journey”.