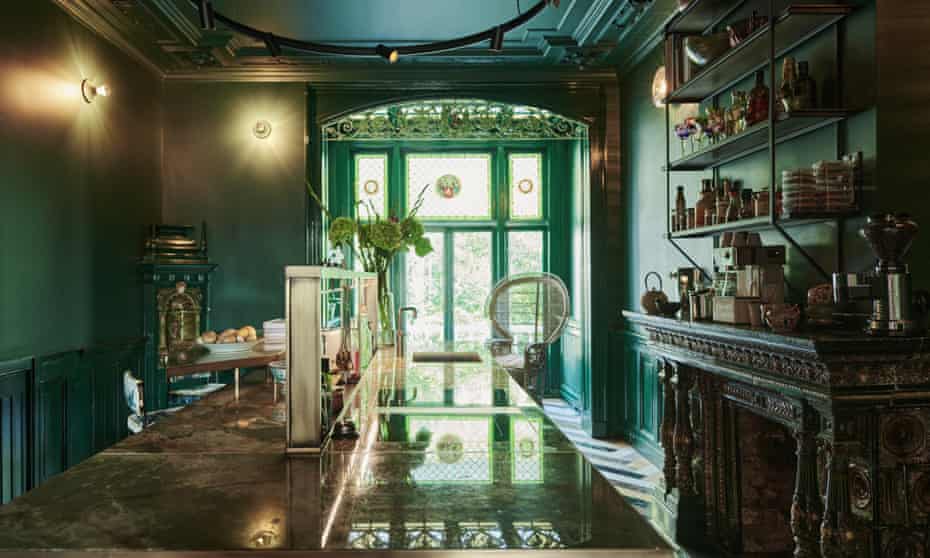 AIf you want to appear larger than in 2021, you could buy a house with a gable and columns. For the Dutch architect Abraham Salm, the construction of a house (one of five) on a location on the Amstel east of Amsterdam city center in 1887 meant a lavish sprinkling of coats of arms on mantels, iron grilles and glass doors.

“We discovered stained glass windows in which knights compete against each other during the renovation,” laughs Elmar Krop, the fashion photographer who bought the house four years ago. “Perhaps this should suggest he came from a much older family than he actually had because the house was supposed to look like it was from the 17th century when it was actually built 200 years later.”

Previously converted into four apartments and an office, it was very shabby and long been on the market when Krop moved in with his partner, Claudia Smithson, a marketing director.

“Possibly no one dared buy it because it was also a Grade I listed building and the changes that could be made were limited,” says Krop. But that in itself excited the couple, who knew it would encourage them to be creative and combine traditional traits with more contemporary slang.

“It’s not your typical old house that you might find on the canal. Each room has different features, including Masonic symbols (because Abraham was a Masonic member), but also multiple fireplaces and lots of maiolica in the kitchen and a fountain in the corner. “

When the couple began converting the basement into a basement apartment, they were surprised to discover old hand-painted beams hidden above low ceilings. “They’re beautiful,” says Krop of the dark wood and the floral motifs that adorn them, “but then of course that meant we couldn’t turn it into a bright white room.”

The original plans were to oversee the project with an architect himself, but Krop decided to work with his girlfriend Rachel van der Brug from Rho Interiors after falling in love with a blue onyx counter he saw in their showroom.

“I think we both had a keen interest in creating a home that felt timeless and couldn’t keep up with the decorating trends of 2018,” he says.

The couple had seen beautiful terrazzo floors with Rho in Milan, and Solid Nature marble and natural stone are a recurring theme throughout the house. The kitchen has no less than 30 different types of marble, all arranged in a herringbone pattern (something recreated in wood in the dining room), as well as other remnants of travertine and onyx that elegantly mismatch.

“It was great fun. It was all leftover pieces, so we didn’t know what it would look like, ”explains Krop. The shiny floor highlights the green onyx countertop, a Verde Bullae stone with special veins. The rich emerald green hue also matches the existing fireplace, maiolica fountain, and dark green painted walls, providing a green backdrop for De Gournay hand-painted flamingo walls.

In the hallway it is Viennese white marble with a book attached and laid out as a seamless piece with continuous veins. Krop firmly believed that this cream-colored marble shouldn’t be too shiny, but rather match the hallway on the first floor, which has retained its original, worn-out marble. 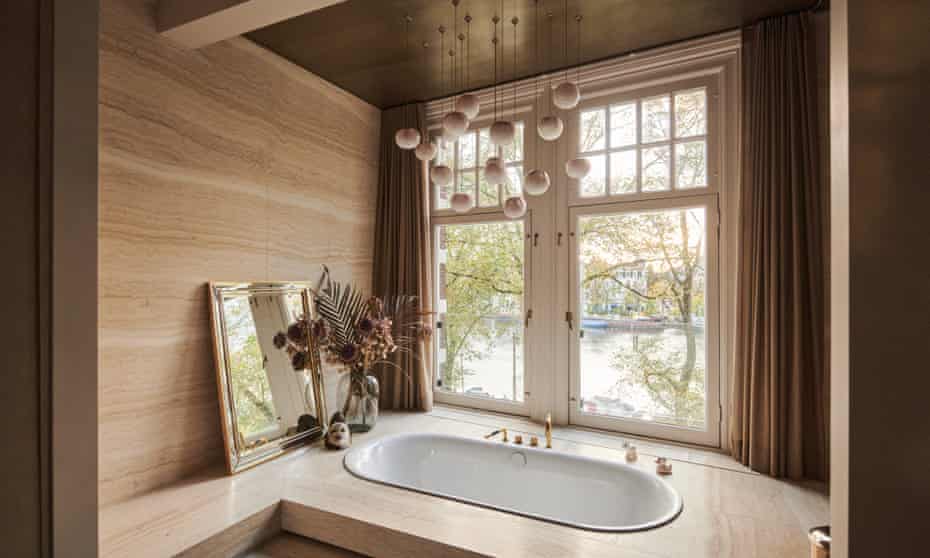 A river flows through it: the bathroom with a view over the Amstel. Photo: Elmar Krop

The move from a 70 m² apartment to a 4,000 m² house with floor to ceiling windows presented other challenges. “We feared we would be moving in a cavernous room and it would not be comfortable at all. It was important to us that every room and floor feel as inviting as possible so that we don’t spend all of our time in a favorite room or floor. “

Farrow & Ball’s Railings, a blue-black shade in the library (also Salm’s office according to old photos by Krop), conveys a club room feeling, while elegant Delft tiles and heavy Pierre Frey curtains give the reduced interior a decorative note.

The master bathroom, or the on-site spa as Smithson jokingly calls it, is one of the few rooms where the couple has been able to strip everything and create something new. The room exudes a zen-like calm, and Krop was also drawn to the idea that stairs lead to the bathroom and then open up to get a breathtaking view of the Amstel.

“I’m not really a fan of bathrooms,” he says, “but from the second floor, when you look out the window, with so much greenery on either side and a view of the river, you can completely forget that you are in the bathroom is in the middle of a city. “Travertine slabs cover every piece of wall. It’s a calm, low-key luxury. One hopes Salm would have agreed.