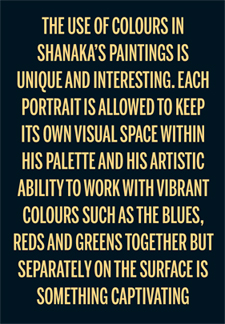 Soul Windows The second solo exhibition by Shanaka Kulathunga will take place from March 12th to 14th in the Lionel Wendt Art Gallery.

Shanaka Kulthunga is a skilled, self-taught artist who specializes in portraiture and was mainly inspired by the techniques of the Renaissance masters. The human body has been both his subject and his muse behind his creativity since his youth, which later led him to find his artistic soul and professional career as a doctor.

Soul Windows is his second solo exhibition this year from March 12th to 14th in the Lionel Wendt Gallery. Soul Windows is synonymous with “eyes” and a person’s eyes are the windows of the soul. Soul Windows will unfold Shanaka’s latest collection of soulful portraits of the “known and unknown”.

In an interview with the Sunday Observer, he recalls the love for painting that had grown in him since he was a child. However, his parents had been hardworking since he was in school and always encouraged him to choose professionally oriented subjects. “Art” was not in their vocabulary. Although he passed the GCE (Ordinary Level) exam with bright colors, even though he chose to study life sciences at the Royal Collage in Colombo, he soon became popular in school for his artistic talents. “I was the average student in the bio class, but my unique identity as an artist has always shined and shined. I feel more like me when I’m in front of a canvas. “

Shanaka identifies as an “outsider” of the local art brotherhood; However, he learned the basics of human anatomy at the Vibhavi Academy of Fine Arts and was trained by noted artist Dr. Chandraguptha Thenuwara trained. During his career as an artist, Shanaka received recognition for his art and won many awards and recognitions locally and internationally. His work has been part of many group exhibitions, including the annual Sri Lankan art exhibition organized by the George Keyt Foundation.

The use of color in Shanaka’s paintings is unique and interesting. Each portrait is allowed to keep its own visual space in its palette, and its artistic ability to work with vibrant colors like blue, red and green together but separately on the surface is fascinating. Shanaka explains his point of view on the use of colors as follows: “I am totally in love with the use of primary colors. I think the strength of red, blue and yellow and the contrast they create give the picture a lot of vibrancy. Also, I always like to experiment, although my most convenient medium choices are oil and acrylic, I also try to work with pastels and charcoal. Sometimes even without colors. “

Shanaka talks about his work process and spends more time thinking about the realistic properties of the portrait and visualizing them before working with the model. As an artist who practices traditional, precise techniques as much as possible in his paintings, the primary goal of every portrait is the concept, the decision of which requires a lot of thought and energy. “I always believe that drawing a portrait is not just what I see, but also what I want others to see through. That’s why I pay more attention to one detail in every portrait and develop the concept of this person based on that, ”he said.

To a patient viewer of Shanaka’s paintings, his disciplined brushwork, texture, value compression, and color harmony are quite evident. His great attention to correct color tones, values, proportions, etc. is evident in each of his paintings.

“I love to paint in many layers and try to anticipate the effect of one layer on subsequent layers. It’s quite a grueling process, but exciting and definitely keeps me busy, ”says Shanaka.

As Shanaka reveals, he never limits the time he spends with models to one or two sessions, but each portrait lasts at least six to eight sessions. Although he has photographed many poses of a model, he tries to rely on live drawing as much as possible. “The images in this exhibition, Soul Windows, were retouched many times from start to finish until I was satisfied. I can’t whip a painting every couple of weeks anymore, but this process fulfills me much more as an artist. “

Any portrait painting can be thought of as a reflection on the mystery of life. Shanaka’s pictorial style can certainly be defined as a realist or a hyperrealist, where the level of detail in his paintings is quite phenomenal. His attention to detail has undoubtedly sharpened and shaped his specialty in portrait painting. “The more details I present, the more I want to keep revealing them. For me it means getting as close as possible to reality and having the illusion that what I create can eventually take life and reveal a soul. Therefore, in every portrait I take, I want to bring an image with a strong visual impact as vividly as possible. “

Shanaka invites all art lovers to visit his exhibition, which marks another milestone on his artistic journey. 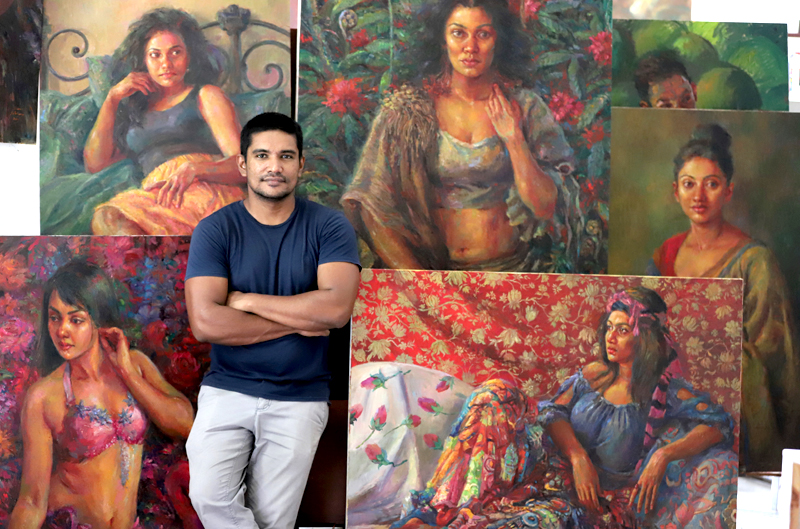