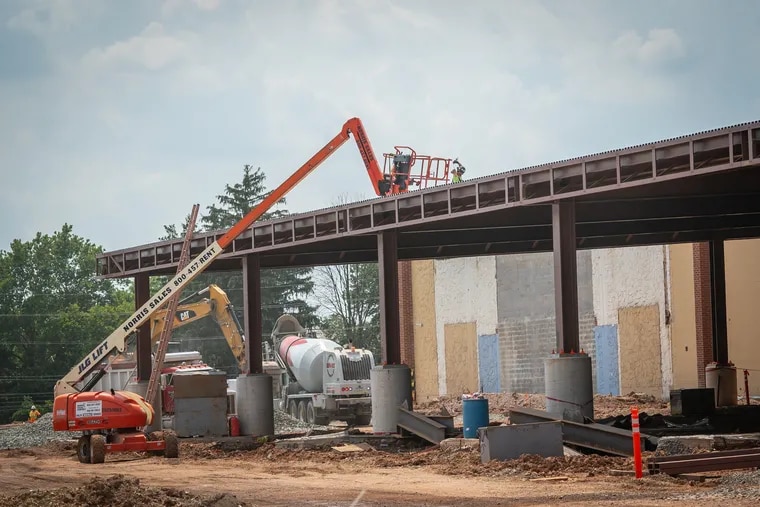 A New Jersey worker building an Amazon warehouse in Norristown died last week after falling from the roof of the structure, according to federal and local authorities.

Wilmer Mejía Landaverde, 24, of Trenton, died July 6 as a result of injuries from the fall, according to the Occupational Safety and Health Administration, or OSHA, which is investigating the incident. The accident occurred around 3:48 p.m. at 53 West Germantown Pike, according to East Norriton police. Amazon was not involved in the construction and is not under investigation.

Trenton-based B & C Construction Contractors employed Mejía, which is the family surname. The general contractor of the Norristown job site was Malvern-based IMC Construction, according to OSHA.

Mejía’s brother, Josué, said Mejía was a Honduran citizen, and the family had a small cattle farm in the Copan region of western Honduras. Mejía had worked in roofing in the United States since about 2015, his brother said.

Josué said he and his brother were replacing roof material about 25 feet above the ground before Mejía’s fall. He recalled that he and his brother removed safety ties while getting water, a move Josué Mejía said is not out of the ordinary on a job site.

“We had a cable [attached]. As you work, you are putting it on and taking it off. Maybe five minutes on, a minute off, then back on,” Josué Mejía said, in Spanish to an Inquirer reporter. “On this minute, sadly, with the great heat, we stopped to drink water [and took off the cable]. And when we came back, we didn’t put it right back on. That happens a lot on these jobs.”

In a statement, an official from IMC Construction, the general contractor, said: “Despite extensive safety training, inspections, procedures, instructions, safety personnel on site and mandated safety requirements, the worker was witnessed by his co-workers removing his mandated safety line from his safety harness while on the roof and within minutes fell.”

OSHA, which noted that the accident job site was nonunion, has conducted three other inspections of IMC Construction job sites since 2017, including one last month in Whitehall, Leigh County. Online records don’t say what the inspections resulted in.

Amazon, which is rapidly expanding across the region, had nearly 60 facilities online or underway as of April, including at least seven smaller facilities in Philadelphia and much larger ones in West Deptford, Carneys Point, Reading, and Wilmington.

In a statement, Amazon spokesperson Branden Baribeau noted that the Norristown site is under construction by a general contractor, with no Amazon employees.

“We’re saddened by this tragic incident and extend our deepest condolences to his family and loved ones,” he said. “It is our understanding that OSHA is investigating and we will work with them as needed.”

OSHA said it has up to six months to complete the investigation. In addition to B & C Construction Contractors and IMC Construction, the agency said it was investigating the primary roof contractor, which it initially identified as A. Poletto & Associates, located in West Chester.

OSHA said the company was the primary roofing contractor of record for the job site, per information it received from IMC Construction.

But Tony Poletto, a representative of A. Poletto & Associates, said the firm was not working on the Norristown project and said another company, Poletto Roofing, was the contractor of record. The two businesses “are separate and distinct legal entities which do not share common ownership,” said Poletto’s attorney, Stephen McDonnell.

According to the latest figures from the Bureau of Labor Statistics, the deadliest jobs in Pennsylvania were construction and the private transportation and warehousing industries. Both sectors posted 26 fatalities in the state in 2019.

According to federal data, 5,333 workers died on the job in 2019 across the nation, or about 15 deaths a day. According to OSHA, the most frequently violated safety standards were for fall protection during the 2020 fiscal year ending in September.

“Falls are among the most common causes of serious work related injuries and deaths,” OSHA experts caution on the agency’s website. “Employers must set up the work place to prevent employees from falling off of overhead platforms, elevated work stations or into holes in the floor and walls.”