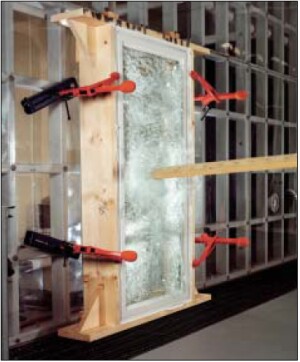 When Hurricane Andrew slammed into South Florida in 1992, it wiped out thousands of homes. It also set in motion a procession of code upgrades designed to make homes tougher. One significant change in the 2000s was a requirement to protect window openings in hurricane-prone regions.

Why toughen windows? There are several reasons. One is that if windows are breached in a storm, water intrusion does costly damage to building interiors. Beyond that, when windows fail, wind enters the building and pressurizes the interior. That can lead to a cascade of structural failures that results in the destruction of the entire building. Windows can be the weak leak in the chain and the root cause of a total loss.

The International Building Code (IBC) and International Residential Code (IRC) now include maps that depict the areas close to the coastline that are termed “Wind Borne Debris Regions.” These are locations where the design wind speed is fast enough to pick up objects such as framing members, roof tiles, or tree branches and carry them through the air. When heavy objects crash into typical windows, they tend to destroy the windows and set off that chain of destructive events. So in wind borne debris regions, the code requires window openings to be protected.

The code provides several allowable methods for protecting window openings. The least expensive is to provide precut wood structural panels that can be applied over the openings when a storm approaches. This method requires the panels to be cut to size and predrilled for fastening and the attachment points to the building to be permanently affixed to the structure.

The building can also be fitted with permanent storm shutters. Or, the building can be equipped with impact-rated windows that have been tested to withstand the impact of wind-borne debris.

The method of supplying wood structural panels has the advantage of low cost. Besides that, proponents argue that applying panels over the window can protect the window itself from damage, avoiding the cost of window replacement in case of a storm. Impact-rated windows protect the building from damage, but in the event that they’re needed, the windows themselves are sacrificial: They are likely to be damaged and will probably have to be replaced.

On the other hand, building the protection into the windows themselves avoids the practical problem of installing temporary shields as a storm approaches. This is attractive to nonhandy homeowners who may not be up to the task; and when a storm is approaching, it can be hard to find labor to prep a house for a hurricane impact. Many coastal homes are second homes or rental properties, and the owners might not be around to take care of storm preparations when needed.

So what’s an impact-resistant window? To meet code, samples of the window unit need to have passed laboratory testing under ASTM Standard E1996. That standard specifies a test regime in which window assemblies, including the attachment to the structure, are bombarded by a 9-pound 2×4 missile fired out of a test gun at 34 miles per hour (that is, 50 feet per second). The window is blasted at three locations, and to pass, it has to remain able to protect the opening. The 2×4 can make a hole, but it has to be smaller than 3 inches in diameter. After the cannon assault, the window is subjected to thousands of pressurizations and depressurizations to ensure that it could withstand hurricane-force wind pressures even after a “large missile” impact.

An impact-resistant window can shatter and still pass the large missile test if the window remains largely intact through the 9,000 pressure cycles. The glass fragments tend to adhere to the plastic interlayer, which is considered intact if the size of any rips that develop during the test total less than 1/16 inch wide by 5 inches long.

Windows designed to pass this test have beefy frames. As for the glazing, it’s a sandwich made up of two layers of glass fused to a tough plastic membrane in the center. In practice, the glass typically shatters during the test. But the plastic typically remains intact, preserving the integrity of the opening protection.

When it comes to tougher window protection, Texas builder Krystle Henson has learned a few lessons. Henson runs KC Coastal Homes in Rockport, Texas, a beach town near Corpus Christi. On August 26, 2017, Rockport took a direct hit from Category 4 Hurricane Harvey. Most of the buildings in town sustained damage, and many were destroyed by the wind.

Says Henson: “Prior to being hit by that hurricane—and I think I can speak for multiple builders—there was a lot of pushback with our engineers, thinking that they are having us do too much, or ‘this is overkill,’ or things like that. But after Harvey, seeing the houses that I worked on still standing, I can guarantee you that I do not argue with anything the engineer ever says now.”

Every house Henson builds is in the Wind Borne Debris Region. And prior to Harvey, she says, “the majority of the homeowners did not want to pay the increased cost to have either shutters put on their windows or impact windows installed. They just went with the standard vinyl windows, and we would cut plywood that would fit the window.”

Harvey put that strategy to the test. Says Henson: “When the storm was coming, I had homeowners calling me wondering where that plywood was.” The more-focused homeowners knew where to find their plywood and how to put it up, she says, “but the majority of the homeowners had no idea where the plywood was or how to get it on.”

“And most of the homeowners down here are second homeowners, so they would have to drive down from wherever they live to be able to get that plywood installed over their windows,” says Henson. The upshot? “Post Harvey, every single house that I have built has had impact glass or roll-down shutters.”

And given the choice, Henson recommends the impact glass. That’s based on both cost and practicality, she says. “With the roll-down shutters you have to pay for the electrical rough-in,” she points out, “and then the shutter company.” If the homeowner doesn’t want to pay for electrically operated shutters, then they’re left with the necessity of coming to the house and manually operating the shutters in the event of a storm. Dollar for dollar, according to Henson, impact glass makes the most sense.