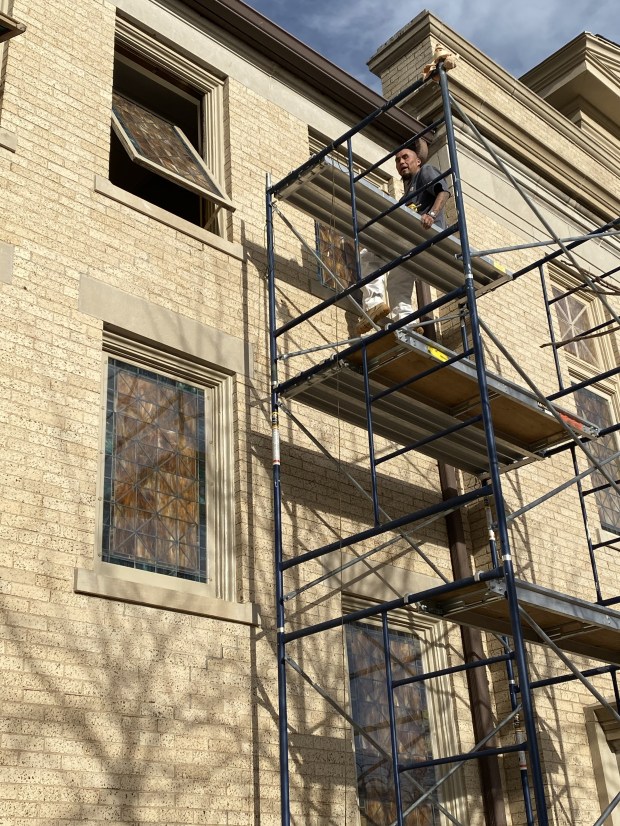 The iconic windows of Sterling’s century-old First Presbyterian Church are finally protected from the elements.

The 74 stained glass windows and 16 Florentine glass windows recently were fitted with protective glazing of tempered glass a quarter of an inch thick. According to Penny Propst of the church’s Property Committee, the project was funded with grant of $84,694 from Colorado’s historical preservation fund, which the church matched with $28,231.

The idea of covering the windows to protect against the elements first came up about 25 years ago, Propst said. Some preservation of the windows already was under way when, in July 2015, the congregation’s worst nightmare came true; half of the church’s stained-glass windows were seriously damaged in a hail storm.

The effort to replace the damaged windows took several years and the efforts of noted stained-glass artist Ruth Wallick of Northern Colorado Stained Glass Co. of LaPorte, Colo. It’s worth noting that, during that same time, Wallick also was working on refurbishing the huge narthex window at Prince of Peace Episcopal Church just two blocks away.

Replacing the glass in the Presbyterian Church’s windows was not exactly routine. Some of the glass had to be specially made because it had last been manufactured in the 1920s. Replacing the broken windows alone cost more than $82,000, Propst said.

Once the windows were replaced, discussion turned to how to protect them from future catastrophe. It wasn’t a matter of simply layering heavy-duty plastic storm windows like Plexiglas™ over the windows. Plastic scratches and clouds over, and moisture can build up between the protected window and the sheathing.

Instead, temporary plexi was installed with gaps at the top and bottom to allow air circulation while a permanent solution could be found.

That solution was the thick glazing provided by Heritage Window Restoration of Commerce City, Colo. Heritage officials came to look at the 90 windows in 2019 and offered an estimate. The Property Committee turned to the Colorado Historical Society, now known as History Colorado, and submitted a competitive grant request to History Colorado’s State Historical Fund in April 2020. Jim Neblitt and Kim Jackson, both experienced grant writers, helped Propst write the request document. Four months later, in the depths of the COVID-19 pandemic, History Colorado granted the request  and the church raised the matching funds.

In December 2020 Heritage sent a crew out to measure the windows and make templates of the exact size and shape of each of the windows. The actual protective windows were made by Allied Window of Ohio. Allied produced coverings with narrower frames that revealed all of each window and more of the window sashes. The covers also come with clasps so the glazing can be removed for cleaning and repair of the windows.

All of this would make for a fairly routine story except for an apocryphal tale that comes out of the Great Depression, with its bank and business failures, farm foreclosures, dust storms and massive unemployment. According to the tale, the church’s board of trustees, now called the Session, was debating ways to save money in the face of declining revenue. One suggestion was to extinguish the light that burned all night in front of the church’s “Good Shepherd” stained-glass window on the southwest side of the church. The board couldn’t make a decision, though turning the light off remained very much “on the table.”

The story goes that an unidentified man, walking past the church and in the throes of a decision to end his life of misery and poverty, happened to look up and see the window, lit from the inside. He would later recount that when he saw the image of Jesus caring for his flock, he felt as if the light of the world had shown upon him.

After that, the light stayed on.

No one knows how much of the story is true, of course; all of the principals in the tale are long since gone, but the details of the story aren’t important. Members of the church still feel the need to light that window for anyone who might need similar inspiration.