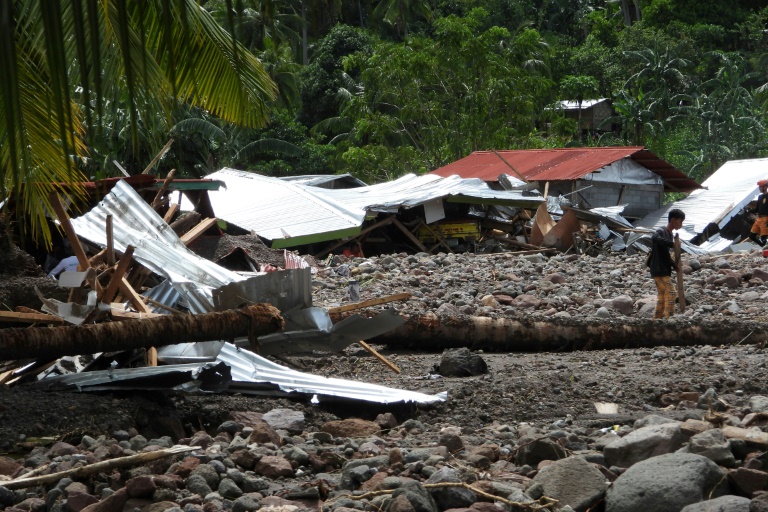 As midnight approached and floodwaters rose around her, mother-of-three Chonalyn Sapi sought refuge at her local village chapel in the southern Philippines province of Maguindanao del Norte, only to find it was already filled with her neighbours.

Desperate to find shelter before tropical storm Nalgae hit, she and others ran uphill in the dark, as boulders, mud and debris rumbled down the mountain in a massive landslide that would go on to bury the nearby hamlet of Kusiong, their home.

“We didn’t sleep that night after the rain started,” Sapi, one of the few survivors of the deluge, told AFP.

“At midnight it was already mud, not water. Some ran to the school, while the others chose the church. Some were already asleep.”

Sapi said those who reached the local high school building survived, but those in the church — including two elderly relatives of hers — were buried beneath the mud.

“We did not even have a flashlight. It was really dark. We heard the rumbling of boulders rolling down the mountain. You could not mistake it for anything else,” she said.

Miraculously, she, her husband, and their two younger children were unscathed.

Soaking wet and shivering in the cold, they waited out the deluge on the hillside for three hours.

Just before dawn, the rain abated, and the family gingerly picked its way back down to the devastated village, wading through torrents of water.

Viewed through drone footage, the impact of the landslide was staggering. It created a massive mound of debris the size of about 10 football fields, just below several picturesque mountain peaks carpeted in yellow-green grass. 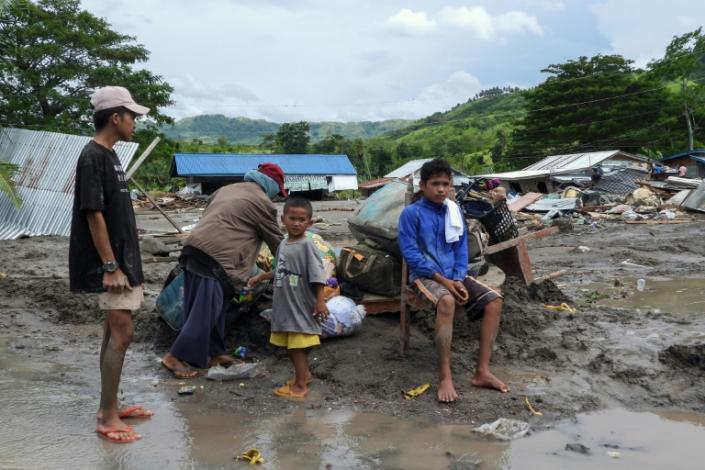 Rescuers clad in the orange vests of the local fire department and armed with shovels poked beneath the galvanised iron roofing sheets of the homes that were half-buried in the rock and mud, looking for bodies.

About 60 houses were buried, while a few others made of lighter materials were swept down towards the road below, said Lieutenant-Colonel Dennis Almorato, spokesman for an army division tasked with helping rescue efforts.

“That area is at the foot of the mountain. The heavy rain could have softened up the slopes,” Almorato told AFP.

Fourteen bodies have been recovered from the village so far. They are among 40 confirmed deaths in a series of flash floods and landslides that swept through the southern Philippines ahead of Nalgae’s landfall on Saturday.

The mayor of the nearby municipality of Datu Odin Sinsuat, Lester Sinsuat, told AFP up to 100 people could have been buried in the rubble.

Mercedes Mocadef stood guard by the body of her niece, one of three cadavers retrieved by rescuers on Saturday.

“Had she died of illness it would have been less painful,” Mocadef said, adding the dead young woman’s mother — her cousin — had also died, her body stored at a local morgue.

The women are all members of the Teduray, one of the Philippines’ many small indigenous tribes who live hardscrabble lives on the edge of society.

Sapi said they used to live along the coast, among a row of beach resorts located about half a kilometre (0.3 miles) below. The owner of that property, however, relocated them to Kusiong two years ago.

The new arrivals stripped trees on the lower slopes of the mountain to farm coconut trees and corn.

Many coconut tree trunks slid down the mountain during the landslide, crashing into their homes.

“If people offer us a new place to stay we would probably reject it,” Sapi said.