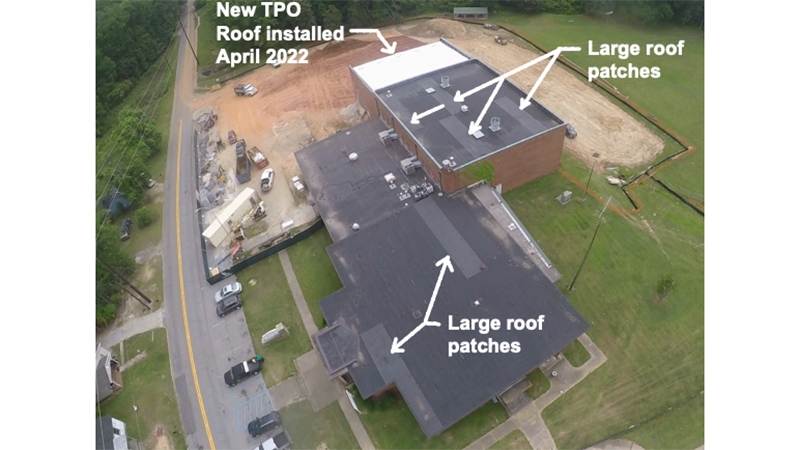 It’s an investment that continues to add up, but one county heads believe will be worth it in the end.

The Troup County Board of Commissioners approved Tuesday a $576,114 change order to reroof the Griggs Center’s 20,770 square foot roof.

“It was in the scope [of the project] to address,” Anderson specified. “We knew there were existing issues, and there were numerous leaks on different parts of the whole existing building. You can see it on all the existing ceiling tiles [in the building].”

According to county documents, the existing roof membrane system, which was installed approximately between 1963 and 1965, appears to be an old rubberized product and has exceeded its useful life cycle.

The existing roof membrane system has been patched/repaired several times, Anderson said, and the only viable solution is an entire roof replacement. With the replacement, Troup County will have a single 20-year warranty with the same roofing contractor and the same general contractor.

The proposed new roofing system includes the installation of 4.5” [R-25] insulation, a 60 mil fully adhered TPO membrane with all associated flashings and all new gutters/downspouts.

“This fits well within the crosshairs of what ARPA is used for,” Mosley said. “We believe it will be a good expenditure for that. We’re certainly excited about what the Griggs Center is becoming.”

Torrance Construction will manage the roof replacement on the current Griggs Center, as part of the ongoing Griggs Recreation Center Enhancements Project. The roof replacement will be completed by Carrollton-based West Georgia Resources, Inc.

The full scope of the first phase includes instilling improvements to the Griggs Center, including remolding the existing smaller practice gymnasium into office space, a computer lab, a wellness center, study rooms and a concessions area.

Renditions of the project’s design elements and phase plans are currently available for viewing at the Griggs Center.