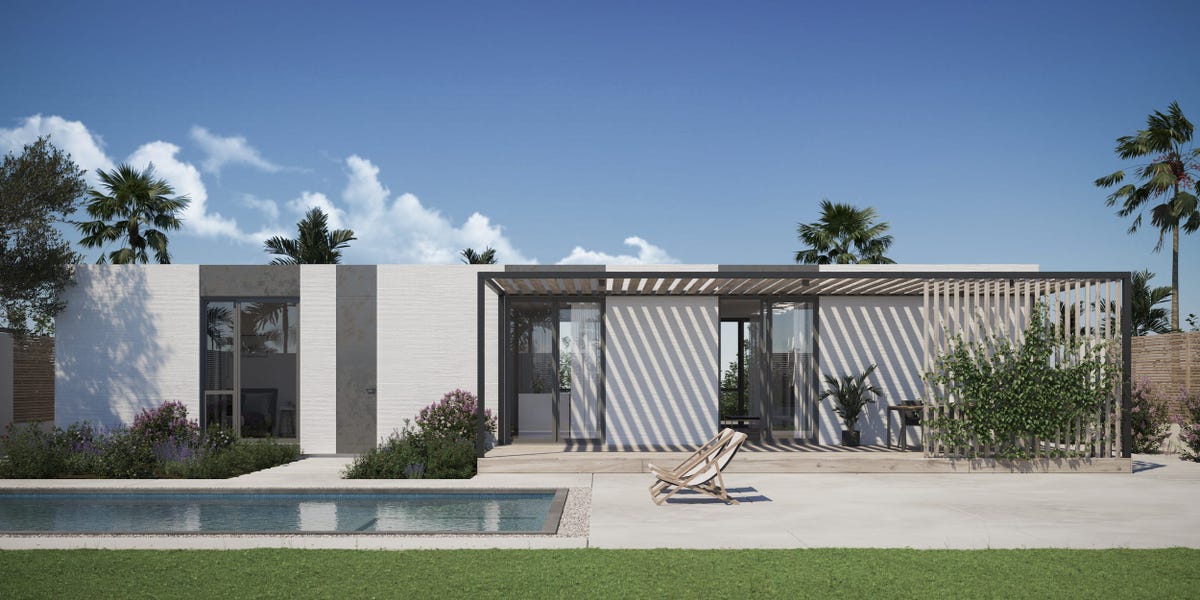 Forget concrete and steel — Mighty Buildings is using robots and 3D printers to build a $15 million community of homes in California.

Mighty Buildings, a construction tech company, specializes in 3D printed homes of varying sizes, presenting a technology-forward solution that could address issues like the housing crisis and sustainability. And so far, this formula has found the company success: last month, Mighty Buildings raised $40 million in a Series B round.

The California-based business isn’t the first or only company taking advantage of this growing 3D printing tech. But unlike other companies, Mighty Building’s upcoming project in Rancho Mirage, California will have the title of “world’s first planned community of 3D printed homes,” according to its maker.

Read more: This company is building 3-D printed, small homes on existing residential properties to fight back against California’s housing shortage. Look inside a unit that was move-in ready in one week.

“This will be the first on-the-ground actualization of our vision for the future of housing – able to be deployed rapidly, affordably, sustainably, and able to augment surrounding communities with a positive dynamic,” Alexey Dubov, cofounder and COO of Mighty Buildings, said in a press release.

To create this first-of-its-kind community, Mighty Buildings partnered with development-focused Palari Group, a working relationship that first started from other property designs in September 2020.

Rancho Mirage may not be Los Angeles or San Francisco, but this southern California location has its benefits. The city — known as “the playground of the presidents,” according to Mighty Buildings — is located in the Coachella Valley, which Sam Ruben, the company’s chief sustainability officer, calls “one of the epicenters of modern design.”

The tech-forward housing development will consist of 15 homes across five-acres. This $15 million project will be built using the Mighty Kit system, which utilizes prefabbed panels to create custom homes.

Through this system, gone are the days of concrete. Instead, the homes will be based on Mighty Building’s 3D printed proprietary Light Stone Material, which sets its shape upon UV light exposure, according to the company. The printers also rely on “robotic automation” and robotic arms, the latter for functions like quality control scans, Ruben told Insider in an email interview.

Using this construction method has several sustainability, speed, and cost advantages. Similar to the general prefabricated home industry, Mighty Building’s 3D printing process allows the homebuilders to create units in a quicker and 40% less expensive manner, all while reducing construction waste by 99%, according to Ruben.

What will the homes include?

The 1,450 square-foot homes — which will be placed atop 10,000-square-foot plots of land — will come with three bedrooms and two bathrooms. If that’s not enough space, the homes will also have a separate 700-square-foot two-bed, one-bath unit.

Looking to take advantage of the California sunshine? The backyard will feature a swimming pool and deck, but this outdoor space can be upgraded with hot tubs, firepits, or open-air showers.

The homes will also come with a “wellness intelligence solution” that can control living aspects like air and water quality and circadian lights. According to Ruben, this integration of smart tech creates both a comfortable and sustainable living experience by only using energy when needed.

Along with this eco-friendly trend, the homes will be “zero-net-energy,” relying on solar and optional Tesla Powerwall batteries for power.  Electric vehicle chargers also come optional.

“The project aims to minimize its environmental impact and offer smart and healthy homes to sustainability-minded buyers,” Mighty Buildings wrote in a press release.

The development will be completed next spring, and Mighty Buildings is already in talks with a “number of developers” for potential future communities.