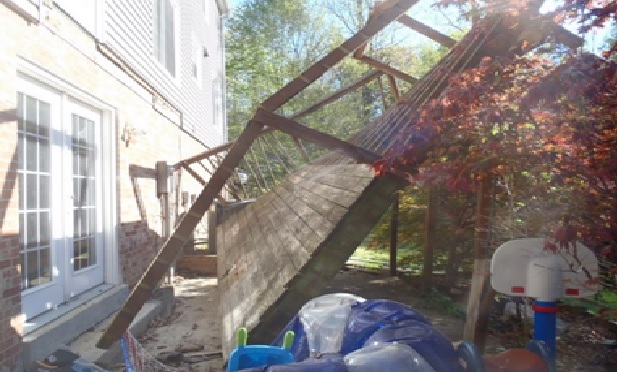 Decks offer a great option for outdoor entertaining, but they represent a significant risk to insurers based on the number and severity of injuries associated with deck failures. (Photo: Anne Kitzman/Shutterstock.com)

Wood-framed decks at homes throughout the country have become much more common in recent years. An exterior deck provides an attractive location for family gatherings and entertaining guests when weather permits. A deck can increase the value of a home, and the absence of a deck can be viewed as a detriment by potential purchasers.

As a result, many decks are added to homes by the homeowner or a contractor after the initial construction and without proper permits or consideration of code requirements. In addition, just like the rest of the home, decks require regular maintenance to continue performing safely. Due to the number of people who tend to gather on decks combined with the types of activities and construction methods, decks represent a significant risk to insurers, as evidenced by the number and severity of injuries associated with deck failures.

Decks can fail for several reasons, but our experience has shown that the most common cause is due to a failure at the ledger board to band joist connection.

Most residential decks are supported in one of two ways; by an independent foundation that does not rely on the house for support, or by a connection to the structural components of the house itself. This second type of support is known as a ledger connection and is the most common source of deck failures.  For a typical deck configuration, the ledger board connection supports approximately half of the 40 pounds per square foot design live load carried by the deck. As we will show, for such a simple connection, there are a large number of things that can go wrong.

Photograph 1 shows a typical ledger board connection failure. This failure was a result of an insufficient number and type of connectors. The primary connectors consisted of vertical rows of three nails spaced at 24 inches on center. The nails were supplemented with a total of four half-inch diameter lag screws across the length of the ledger. In addition, there was no flashing at the ledger to band joist connection to prevent moisture intrusion at the connection. The nails and lag screws were corroded, which further reduced their capacity, and the band joist had deteriorated. The lag screws had to penetrate through the 2×8 ledger board and exterior siding, leaving only one inch of lag screw length to penetrate the band joist. 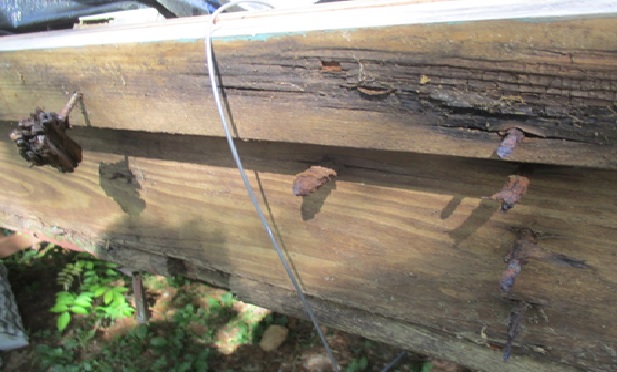 The nails are unreliable in this application and have been prohibited for use in ledger to band joist attachments by modern codes. (Photo 2)  For half-inch diameter lag screws with half-inch thick sheathing over a 2×8 band joist presuming a 10-foot deck joist span, the 2018 International Residential Code and the 2015 Prescriptive Residential Wood Deck Design Guide require the lag screws to be spaced at 18 inches on-center and to penetrate the inside face of the band joist.

Figure 1 reflects requirements from the 2015 Prescriptive Residential Wood Deck Design Guide, which shows the lag screws penetrating both the ledger board, house sheathing and band joist. This would require a minimum lag screw length of 3-1/2 inches. The lag screws at this failed connection were only three inches in length, which was not sufficient to penetrate the ledger, house sheathing, exterior siding and band joist. Note that the detail also indicates the removal of the exterior siding. 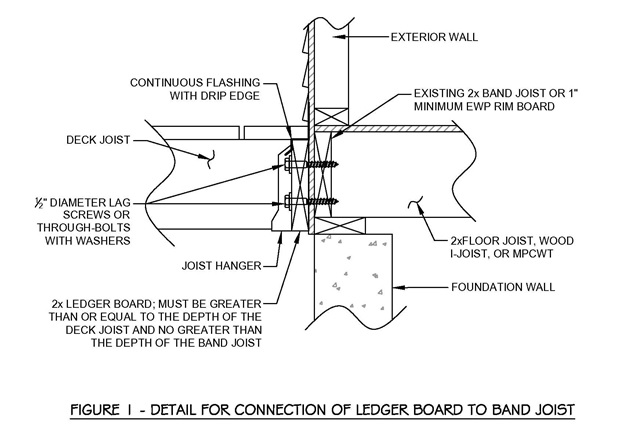 The detail in Figure 1 also shows the ledger to be flashed to prevent water from contacting the untreated lumber of the house band joist.

Decks are required to be constructed of pressure-treated wood which is more resistant to decay from prolonged exposure to moisture. However, the band joist at the house connection is not required to be pressure-treated wood and is, therefore, more susceptible to decay. The flashing required at this connection helps to protect the untreated band joist from deterioration due to moisture exposure. 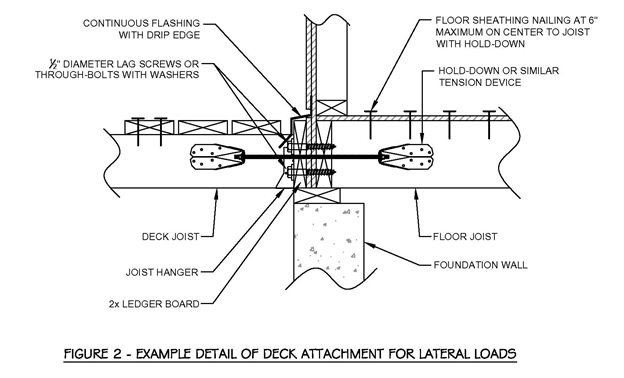 Some decks also require special mechanical connections to resist outward lateral forces. Figure 2 reflects requirements from the 2018 International Residential Code for this type of connection. This connection is a hold-down tension device. The code specifies that a minimum of two such connections be provided per deck, with one connection located within 24 inches of each end of the deck. 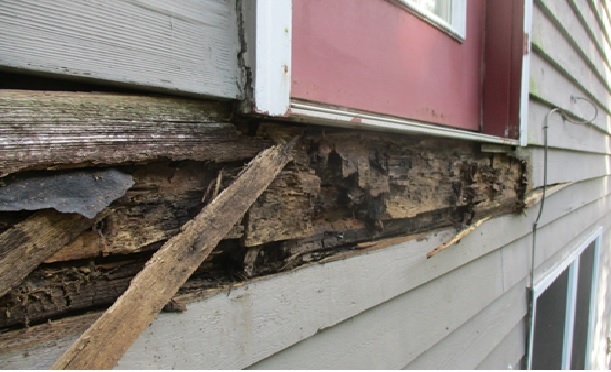 The code also addresses two other common issues at the connection between the deck and house. (Photo 3) The deck can be connected to concrete or solid masonry with expansion, epoxy or adhesive anchors. Note that lead anchors are not permitted. Keep in mind that brick and stone veneers are not considered to be solid structural masonry, and the connection of a deck to a home with brick or stone veneer is prohibited by the code. The deck for a home with brick or stone masonry veneer requires an independent foundation, referred to as a non-ledger deck in the code.

When looking at a home being considered for purchase or to insure, be sure to inspect the deck. Then look for the number of lag screws at the ledger connection to the house; a typical 10-foot wide deck (with 10-foot long joists framing into the ledger) would require approximately eight lag screws (or through-bolts, or similar anchors) spaced at 18 inches on center. Note that decks with longer-spanning joists will require ledger connections at a closer spacing. Look for the flashing at the top of the ledger board and for signs of corrosion on the connectors or deterioration of the wood.

Checking the number of lag screws is fairly simple since they are visible from the exterior. Determining if the lag screws are long enough and if the hold-down tension connectors have been installed may require the removal of a portion of the interior finishes so that the backside of the band joist is visible.