Home Windows and Doors In ‘Broken Windows,’ Art of Elan lets the light in 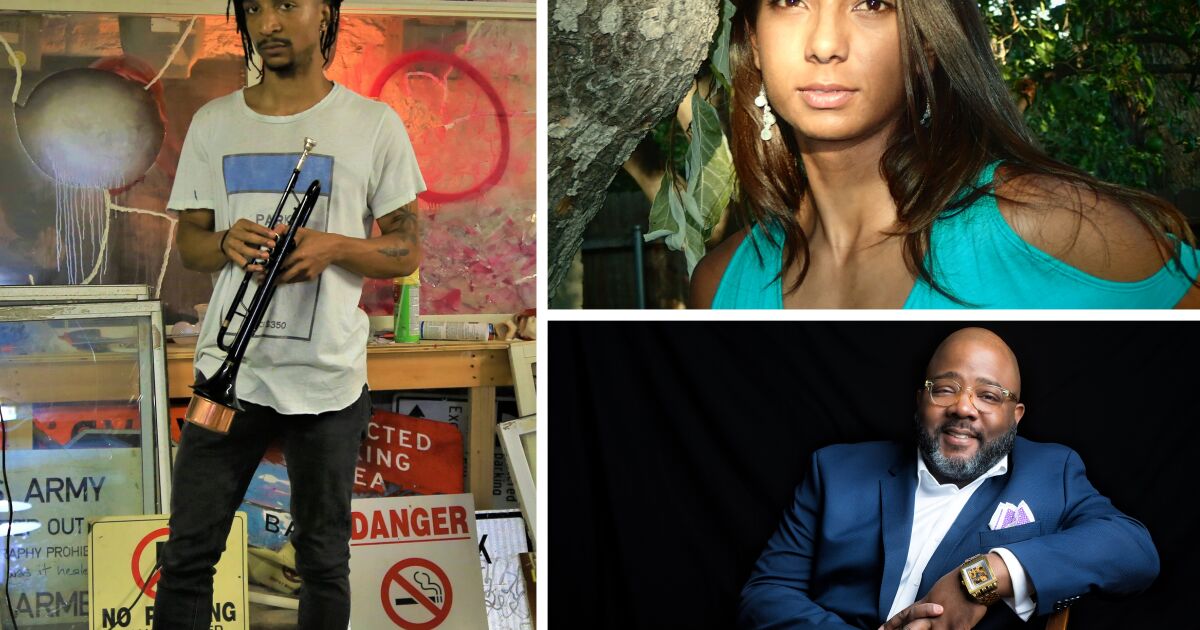 “This is Art of Elan’s recipe,” said Kate Hatmaker, co-founder and artistic director of the forward-thinking nonprofit.

“Our programs are short and diverse soundscapes with diverse instruments. It’s an effective and winning way to present music and engage with subject matter.”

In this, its 16th season, Art of Elan has added to the recipe a heightened awareness of the fragility of the world. Hatmaker said that while recognizing the Earth’s ecological changes is not new, it’s especially urgent now.

“These ecological shifts not only affect how we live but are directly affected by us and how we live,” she said. “We are hoping to raise awareness around this by presenting music that calls for reflection and contemplation.”

Art of Elan’s second concert of the season, “Broken Windows,” will be performed in the San Diego Museum of Art’s gallery showing the exhibit by Justin Sterling. The African-American artist-musician installed 30 broken and mended stained-glass windows into a 1,000-square-foot “Chapel of Rocks,” partly inspired by Houston’s Rothko Chapel.

At the Wednesday concert, the musicians and audience will see light refracted through the broken glass.

“I think the takeaway is Sterling’s creating something light can get through, no matter how broken it is,” Hatmaker said. “It’s a message of hope and optimism.”

The other two works are San Diego debuts: “His House is Not of This Land” by Jonathan Bailey Holland for flute, bass clarinet, violin, viola, cello and “Trail of Stars” for solo harp by Juhi Bansal.

The inspiration for “His House” is Cornelia Parker’s art installation titled “Anti-Mass,” which was created from charred remnants of a church.

Holland, recently named head of Carnegie Mellon University’s School of Music, explained that the title was meant to sound like the name of a hymn, but that the work is not based on an actual hymn.

“‘His House is Not of This Land’ attempts to capture elements of the Black church experience — an experience that is grounded in musical ritual and always incorporates the human voice,” Holland said in an email.

“Much of what the musicians do in this composition is mimic what would be preached/recited/responded to in an actual service, with freedom given to the performers to react to each other in the way congregants might during a church service.”

Art of Elan has long championed Holland’s work. Hatmaker believes “His House” is a reflection on a sense of community.

“You can destroy the church, break the windows,” she said. “But the human spirit is hard to torch.”

“Trail of Stars” is by Juhi Bansal, an Indian composer who grew up in Hong Kong. She entwines those traditions with Western classical music. This is her Art of Elan debut.

Bansal said that her inspiration — similar to Sterling’s chapel — was the idea of a multicultural, interfaith, spiritual space.

“Through our history as a species, we have seen the stars as ways to navigate through sea and over land; we have seen hopes and dreams,” she said via email. “ ‘Trail of Stars’ draws specific inspiration from a technique of photography that captures images of star trails.

“The music plays with shimmering textures, ornamented melodies and gestures that move rapidly between high and low registers to evoke the duality of pointillistic lights and wide, arcing star paths.”

On Wednesday, Bansal’s piece for solo harp will be played by the San Diego Symphony’s principal harpist, Julie Smith Phillips. Except for the Hausmann Quartet’s cellist Alex Greenbaum, the other musicians — including Hatmaker — also hail from the symphony.

Hatmaker is looking forward to presenting local composers this season, as well as continuing to explore these themes. She sees music as a good first step to finding solutions for the world’s challenges.

“As artists, we choose to be creators, even in the face of destruction,” Hatmaker said. “It’s through creating that we can reconnect with hope, optimism and a desire to commune with each other in an authentic and compassionate way.”

Wood is a freelance writer.