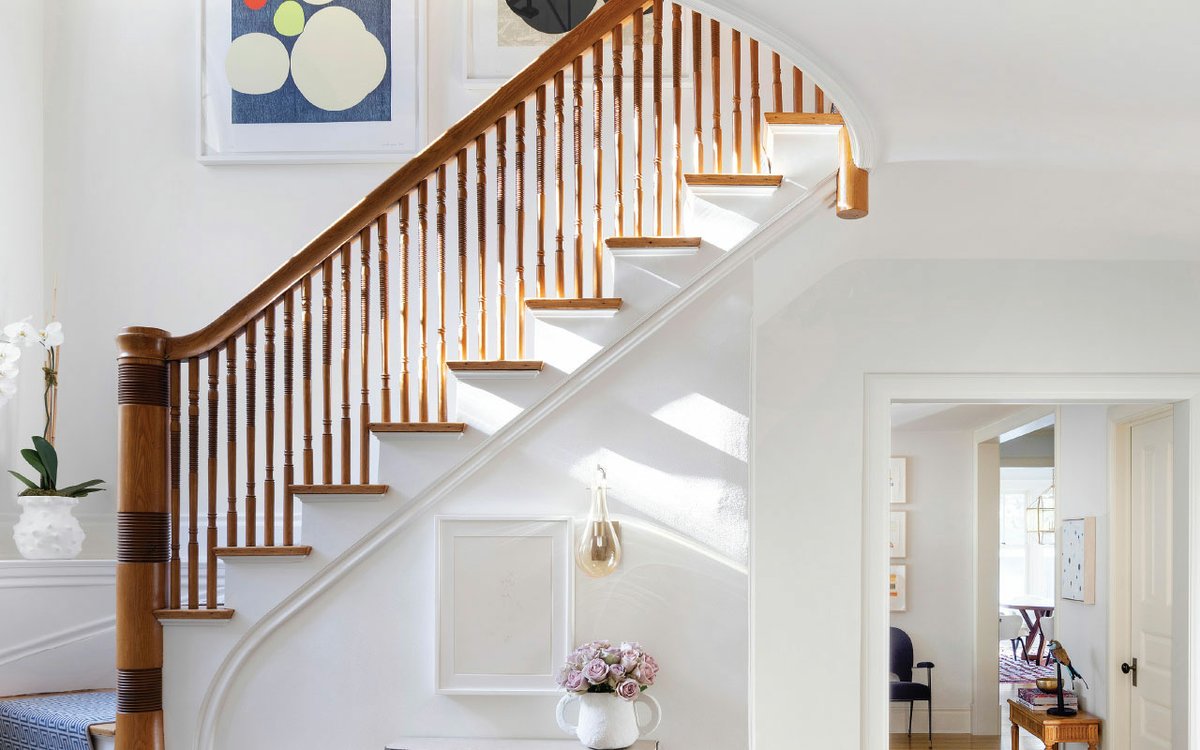 People might assume that interior designers are always updating their own houses. “But as a designer, believe it or not, I don’t change my house that often,” Martha Dayton says. “You’d think we’d be consistently recycling, reusing, redoing. But it’s a little bit like the cobbler’s kids: At the end of the day, the last thing I want to do is work on my own house.”

The primary bedroom closet in the 1892 Minneapolis house she shares with her husband, Tom Nelson, was the tipping point that pushed her into action. “The closet was small and dark, with no room and no light,” she says.

Knowing options to expand were limited in their 3,500-square-foot house, the couple thought perhaps it was time to move. “After 25 years in a house, you think, ‘Well, maybe there’s something else out there,’” she says.

Location and love for the house won out in the end. So Martha enlisted architects Mark Larson and Anders Matney to help overhaul the closet—something they accomplished by connecting it to the primary bedroom with pocket doors, adding an island with deep drawers, and replacing much of the perimeter cabinetry. The design also relocated and reused some built-ins, including a vanity by St. Paul cabinetmaker Jon Frost. “I sit there every day, so I said, ‘If we can incorporate that somehow, it just feels like the right thing to do,’” Martha says.

Retaining a pair of windows, both original to the house, was another nonnegotiable for the closet. “But that was our struggle: With all of those windows and openings, how do you get enough storage?” Martha says. “Finally we decided, ‘Let’s just put some shelves in front of the windows.’”

The closet was the first of a handful of game-changing updates. Martha thought, Well, if I’m going to do that, I might as well do this. “Then it just kind of kept going,” she says. Other big changes included revamping the laundry room and replacing an earlier family room addition. Both spaces now maximize natural light, and the previous family room—now a casual dining room—better connects with backyard living spaces.

Changes are difficult for a first-time visitor to discern, and that was intentional. “There certainly is a feeling in this house—imagining as you walk through it—that it was always this way, that it wasn’t a renovation with parts that were added or modified,” Larson says.

Updates otherwise largely refreshed light fixtures, finishes, and furnishings, all of which lean more transitional and a bit more contemporary than before. “I think the house can hold that because the bones are still solid,” Martha says.

Although she and Tom love the updates, it may be the art—80 percent by Twin Cities artists, Martha estimates—that made her fall truly in love with the house again. “My team and I support local artists and sell a lot of their work, and I’m really proud of that,” she says. “We have no shortage of good talent here. We are so lucky.”

“Everybody has the right to change their taste or favorite color. I find that I’ll go subdued for five years, and then i’ll want color everywhere for five years.”

The Art Of Friendship

Martha Dayton counts Twin Cities artists among her all-time favorites, and works by many play starring roles in her projects. Of the artists, Teo Nguyen is a particular favorite for Martha, whose home and office are filled with his works. What looks like a large-format photograph in her house, she quickly points out, is a photorealistic painting by him. “That’s just how believable he is,” she says. Their friendship has blossomed over 15 years and included her joining Nguyen on a trip to his native country of Vietnam in 2020.

The admiration is mutual. “This all started with Martha,” says Nguyen. “She was always saying, ‘You need to show your work.’ It took me years to finally say yes.”

This summer, Nguyen’s work—including around 50 monumental landscapes inspired in part by Vietnam War news photos—will take the stage at a large solo exhibition at Mia. “We have records of every single American that was sent to

Vietnam, but there’s an estimate that 6 million Vietnamese died in the war, and they are nameless,” Nguyen says. “This is my way of memorializing the lives that passed through these landscapes.”

The Best Window Replacement Companies of 2022