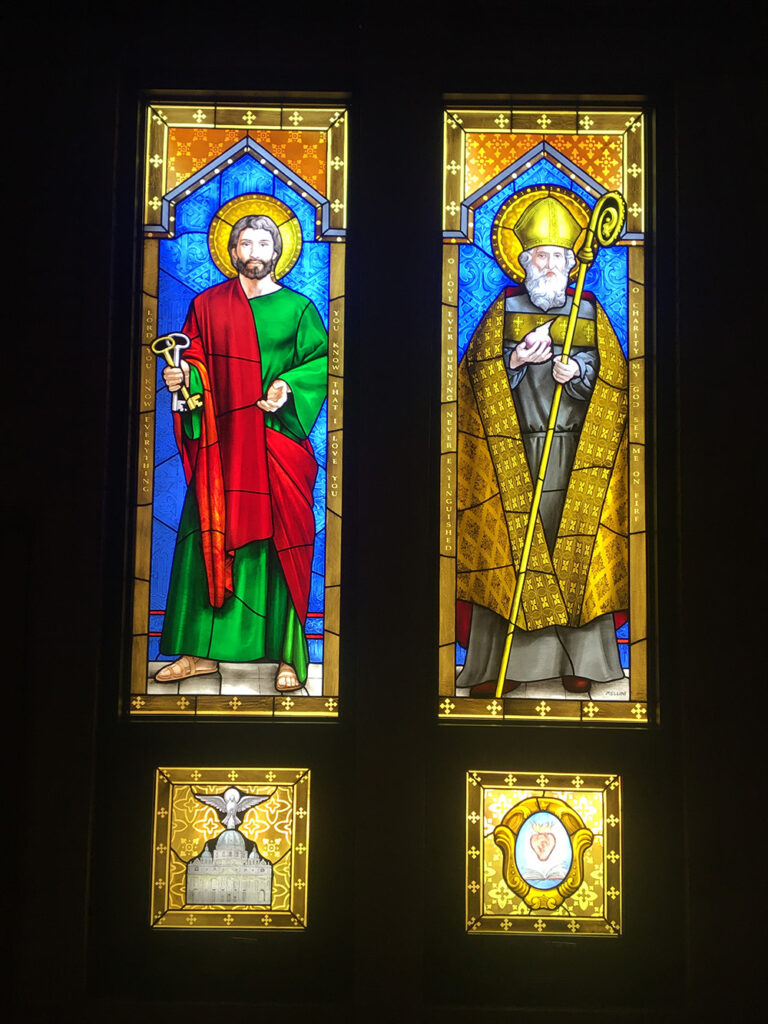 Holy Name Parish in Sheridan has had a long history of renewal and continuity. Built in 1894 at an Irish military fort, it later became St. Patrick’s, a tiny and humble church. In the 1960’s thanks to parishioners, the structure became what it is now. Throughout the years, significant remodeling has been done, making it the meticulously crafted parish it is now. Recently, the parish installed stained glass windows with icons of various saints that unite heaven and earth and allow parishioners and visitors to encounter something otherworldly.

Holy Name pastor Father Daniel Cardó, along with the staff, came up with the project three years ago with connection to the ceiling and baptistery. With full support from parishioners, they interviewed various studios and chose Mellini, a studio from Florence, Italy. When they had finalized the contract in February 2020, it was a month before a global lockdown. Workers had to think of creative and ingenious ways to complete the windows and ship them over to the U.S., explained Father Cardó.

Even as things were going in a bleak way in the months of the lockdown, the parishioners decided they didn’t want that to determine how they should live.

“So we launched a program keeping in mind that the stain glass windows were coming… called The Light Shines In The Darkness. Basically, this time of darkness can be the prelude of more light,” said Father Cardó. “We had a plan for each semester: the first one, more centered in the Father and prayer; the second one, centered in Christ and outreach; and finally in the Holy Spirit and mystagogy trying to enter more deeply into the mystery of God’s love through the friendship and company of these particular saints.”

Choosing which saints and how they should be depicted on the windows is something Father Cardó had to discern. They decided that the distinctive element of the windows would be the expression of the saint as someone that you could not only learn from but also pray to. Every saint has a unique expression that represents all the aspects of the Christian life. There are also relics that the parish altar has of the saints like St. Augustine, St. Vincent de Paul, St. Francis Xavier, St. Therese of Lisieux, St. Pope Pius X, and St. Maria Goretti. All these saints have a window in the parish as they are seen as close friends of the parish.

Another beautiful aspect about the discernment was deciding which phrase said by the saint to put on the windows, explained Father Cardó. The goal was to choose a phrase that would invite the person to have a dialogue with the saint and God. Each window also has a lower window that has an insignia that is related to the saint. There is a pattern of blue and terracotta in all the windows. This is a common theme throughout the church, as the blue on the ceiling represents heaven along with the gold stars. Father Cardó explained that the terracotta represents an earthly element as we are still on pilgrimage.

Every detail on the windows was methodically thought out to be in harmony with the rest of the sacred liturgical architecture and aesthetic of the church. The patterns on the background of the saints are the same as the ones on the sanctuary as well as the arches that are in each window. Even the tile floor where the saints are standing is the same one as the church, showing that the saints are in heaven but also present when people pray or the Holy Mass is celebrated.

Father Cardó believes that there is no practical answer as to why the Church needs more beauty. To him it is an expression of love and love is not something that can be measured. He believes that evangelization indicates the health of the parish community. When we experience Christ in the liturgy, we go out and represent him in the world and come back to his house to ne with him and go out and be the light.

“That’s why beauty is so important,” Father Cardó said. “First comes the Christian witness, sharing the good news, but when people come here they do need to encounter something that is beautiful in one sense, otherworldly, special. (So we) do as much as we can to encounter God.”

The parishioners are very ecstatic about the new windows and the new mosaic being installed around the baptistery. The unveiling happened the day of Pentecost, bringing the project of renewal closer to completion.

“I think it’s a very unique experience to come and pray with these saints who are again with you and so we are very grateful,” concluded Father Cardó. “It’s a great gift from God and also in a humble way it is our own humble gift to him as an attempt to honor him as much as we can.”

Below are images, descriptions and Father Cardó’s commentary on each of the windows.

St. Peter the Apostle
“Lord you know everything, you know that I love you”
Lower window: Mother Church and the Holy Spirit
St. Peter is the one who holds the “key to heaven”  and was the first Head of the Catholic Church.

St. Augustine
“O Love ever-burning never extinguished, O charity my God set me on fire”
Lower Window:  A symbol of the Sacred Heart and the book

As the “Doctor of Grace,” Augustine is known for his writings and his burning heart. 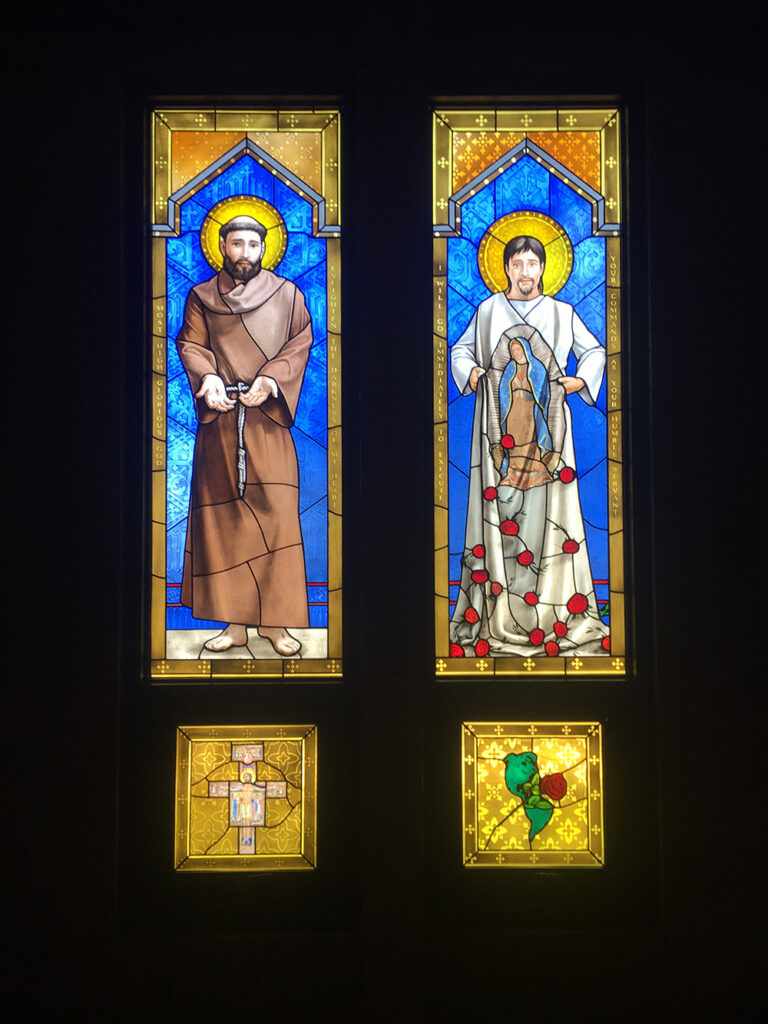 St. Francis of Assisi
“Most high glorious God, enlighten the darkness of my heart”
Lower Window: The Crucified Christ
St. Francis is known for renouncing worldly goods and family for a life of poverty.

St. Juan Diego
“I will go immediately to execute your commands as your humble servant”
Lower Window: Continent of America with a rose

“St. Juan Diego as a saint who is very important in these times of the church particularly in the U.S and Colorado responding to the unity in Christ of the Hispanic and Anglo community. That’s why that symbol is at the bottom of St. Juan Diego is the American continent united by one of the flowers coming from the tilma.” 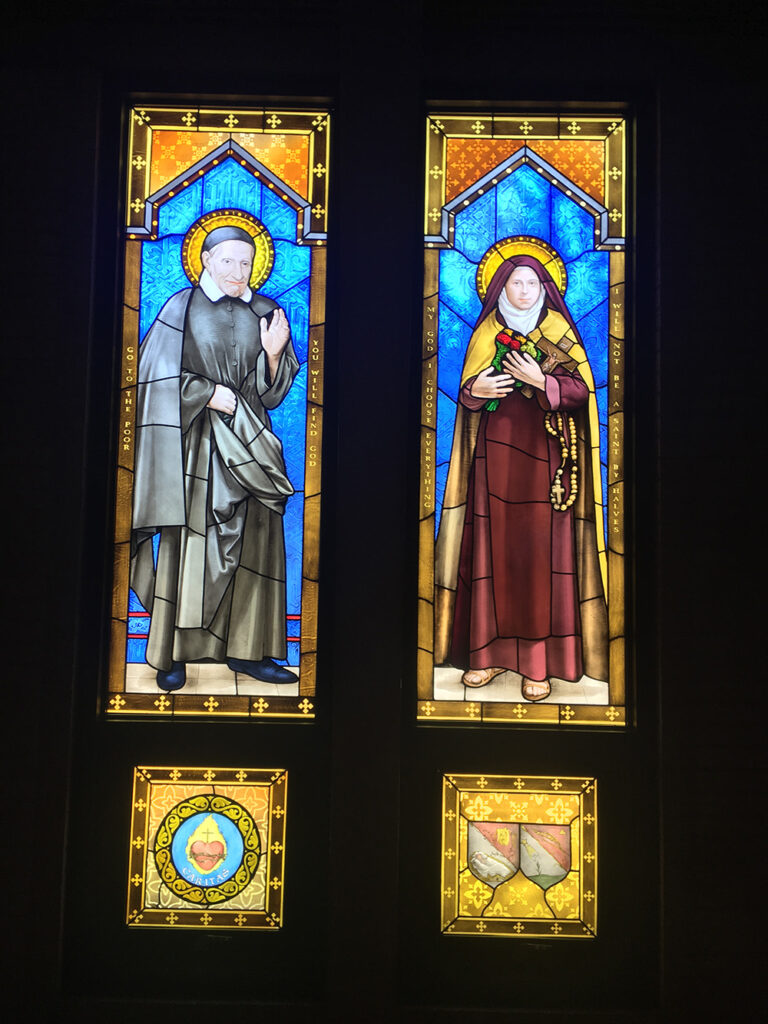 St. Vincent de Paul
“Go to the poor you will find God”
Lower Window: Caritas (charity) related to his works of charity
A priest who dedicated himself to the poor and convicts.

St. Therese of Lisieux
“My God I choose everything, I will not be a saint by halves”

“My favorite is Theresa of Lisieux not only because I always have had a strong devotion to her, but really not only do I think it’s very well portrayed her expression and what she says ‘I will not be a saint by halves.’”

“The coat of arms that she designed herself, (typical Therese!).” 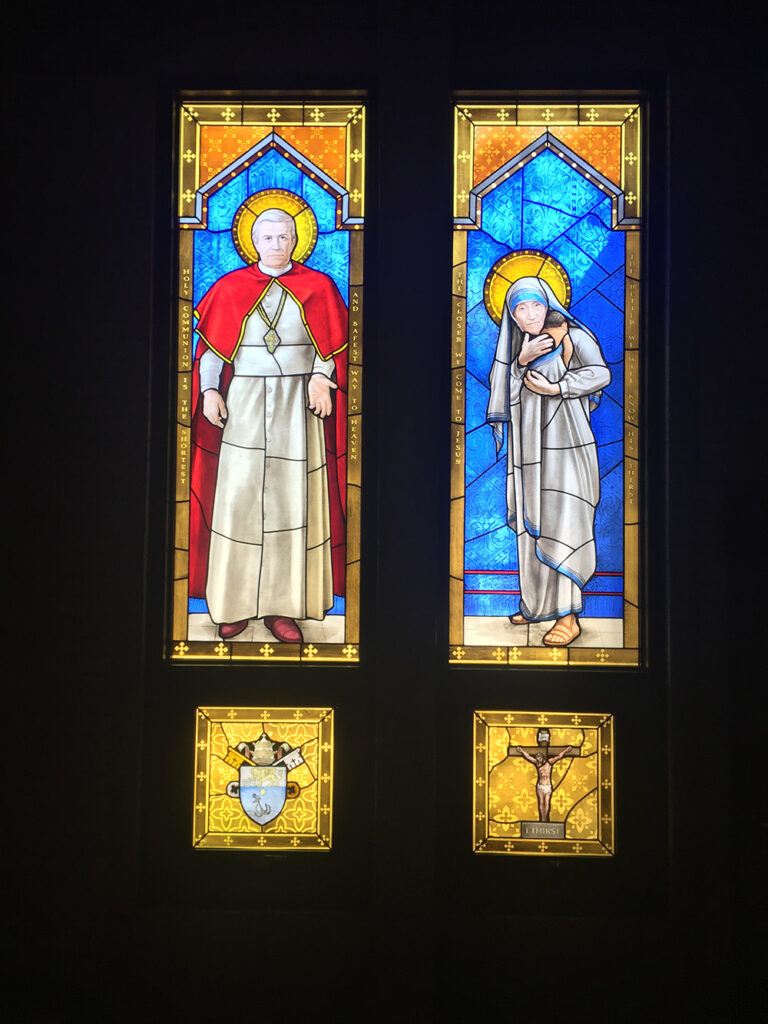 St. Mother Teresa
“The closer we come to Jesus the better we will know his thirst”
Lower Window: “I thirst”: words said by Jesus on the cross

“Mother Teresa, is actually portrayed as suffering. Sometimes we misunderstand (holiness) thinking that it was easy for them and they were cheering and smiling all the time. That’s not life, at times life is hard, our faith is hard so we wanted saints that would reflect what they went through. Which is a little bit of everything in the spectrum of human experience.” 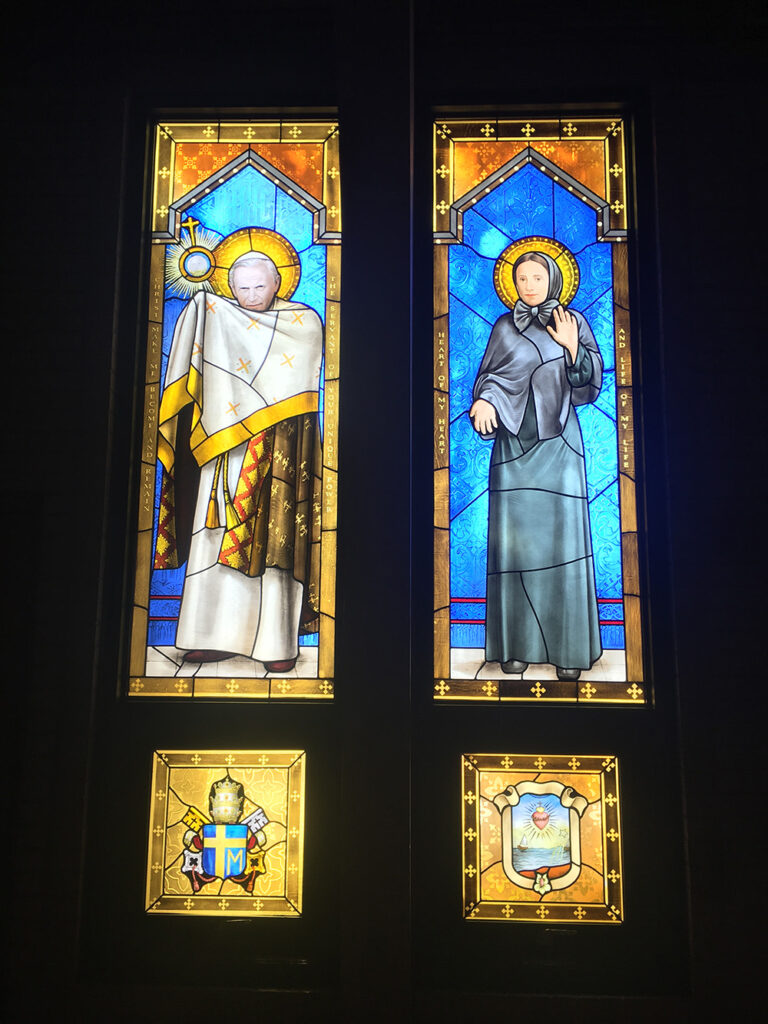 St. Pope John Paul II
“Christ make me become and remain the servant of your unique power”
Lower Window: His coat of arms

“It’s a unique depiction of John Paul II because he is giving Eucharistic Benediction. Wearing all of the vestments with the monstrance and (holding up) the host saying those very powerful words which he said at his inaugural homily as a pope, ‘Christ make me become and remain the servant of your unique power.’ I think that’s a very unique depiction of John Paul II.”

St. Frances Xavier Cabrini
“Heart of my heart and life of my life”
Lower Window: Symbol of the sisters of the Sacred Heart

A saint who established many orphanages, schools, and hospitals. The saint is someone dear to Coloradoans, as she had visited Colorado various times in her life and there is a shrine to honor her. 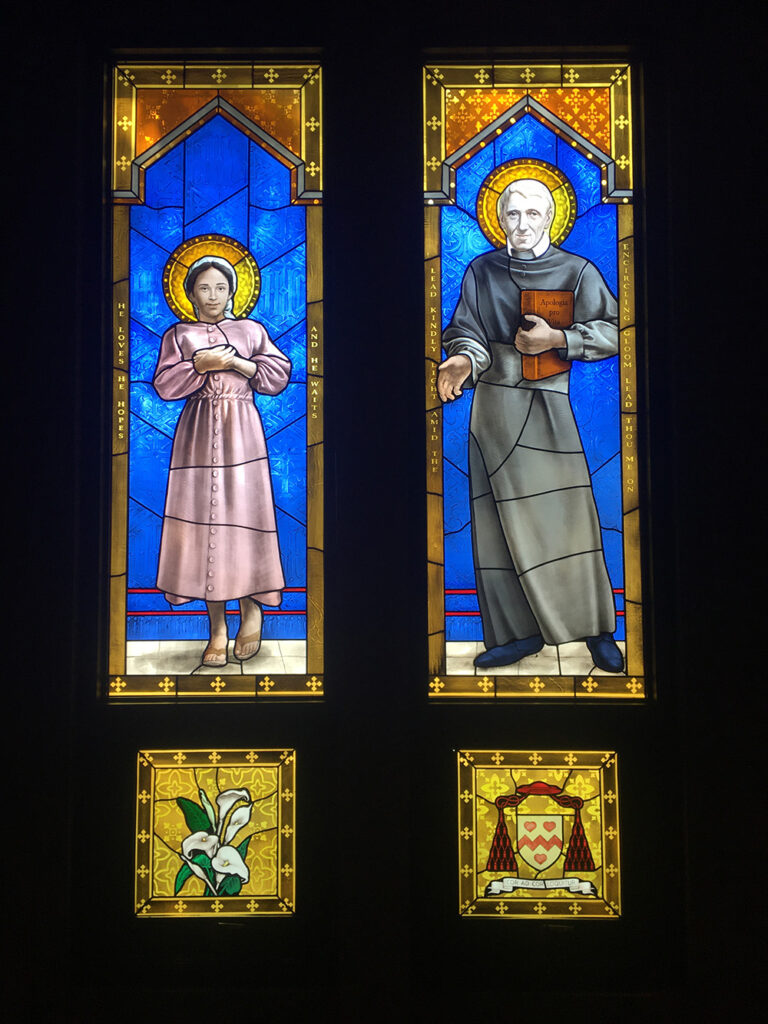 St. Maria Goretti
“He loves, He hopes, and He waits”
Lower Window: Lilies

“Maria Goretti was a saint who died when she was very young defending her purity. She didn’t write any books, she just loved the Lord with her whole heart and did not want to sin. She looks like a normal girl in this window, because she was a normal girl. We could have added more symbolic things to her window (but) we also wanted the simplicity of a normal girl just who loved the Lord that’s why she is a saint.”

St. John Henry Newman
“Lead kindly light amid the encircling gloom lead Thou, me on”
Lower Window:  His coat of arms as a cardinal

“St. John Henry Newman so influential for many people joining the church these days.” 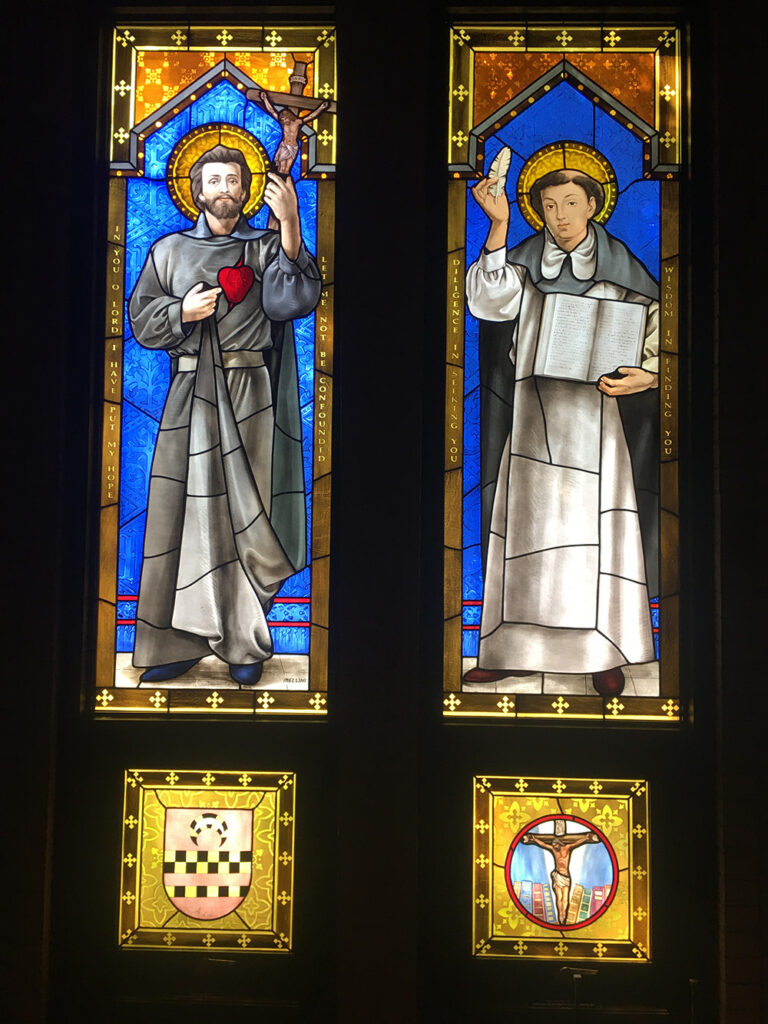 St. Thomas Aquinas
“Diligence in seeking You, wisdom in finding You”
Lower Window: The Crucified Christ set against various books, representing the complementarity of spiritual and intellectual formation

“St. Thomas Aquinas is the ‘Common Doctor’ and therefore, important for everyone whether we’ve read his works or not.”

Doctor of the Church whose work laid important foundations of Catholic Theology. 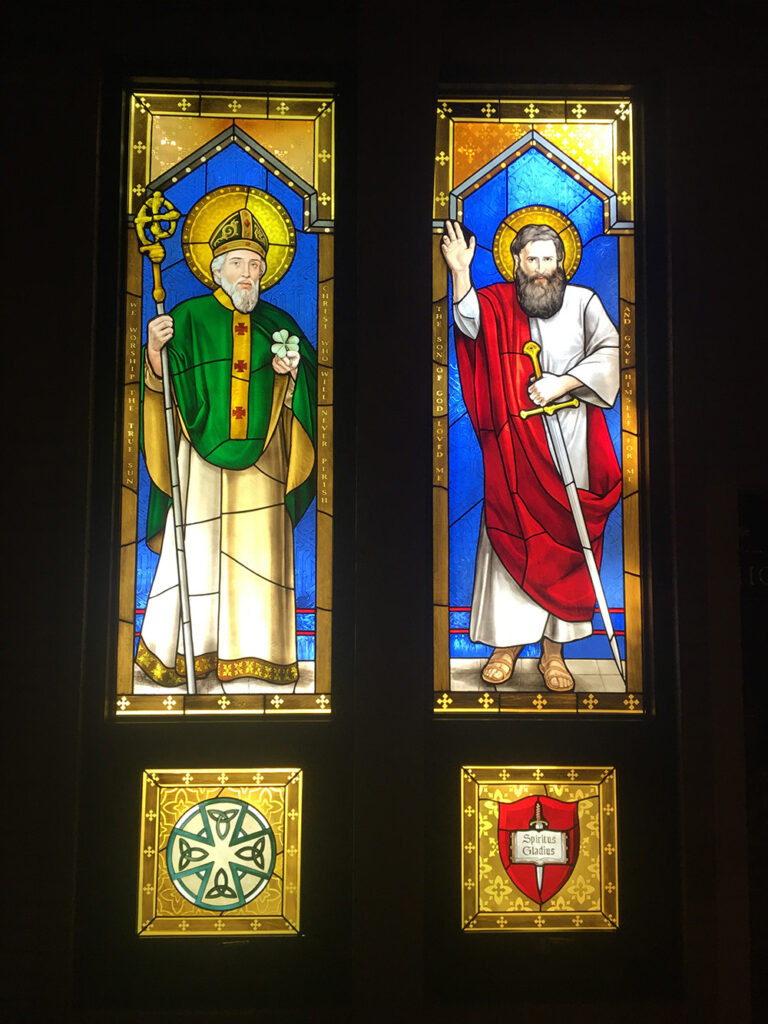 St. Patrick
“We worship the true sun, Christ who will never perish”
Lower Window:  a Trinitarian/Celtic symbol
St. Patrick was the previous saint of Holy Name Parish, which was first an Irish military fort.

St. Paul the Apostle
“The Son of God loved me and gave himself for me”
Lower Window: The New Testament and the sword
Representing the letter he wrote to the Ephesians when he tells them to put on the armor of God.