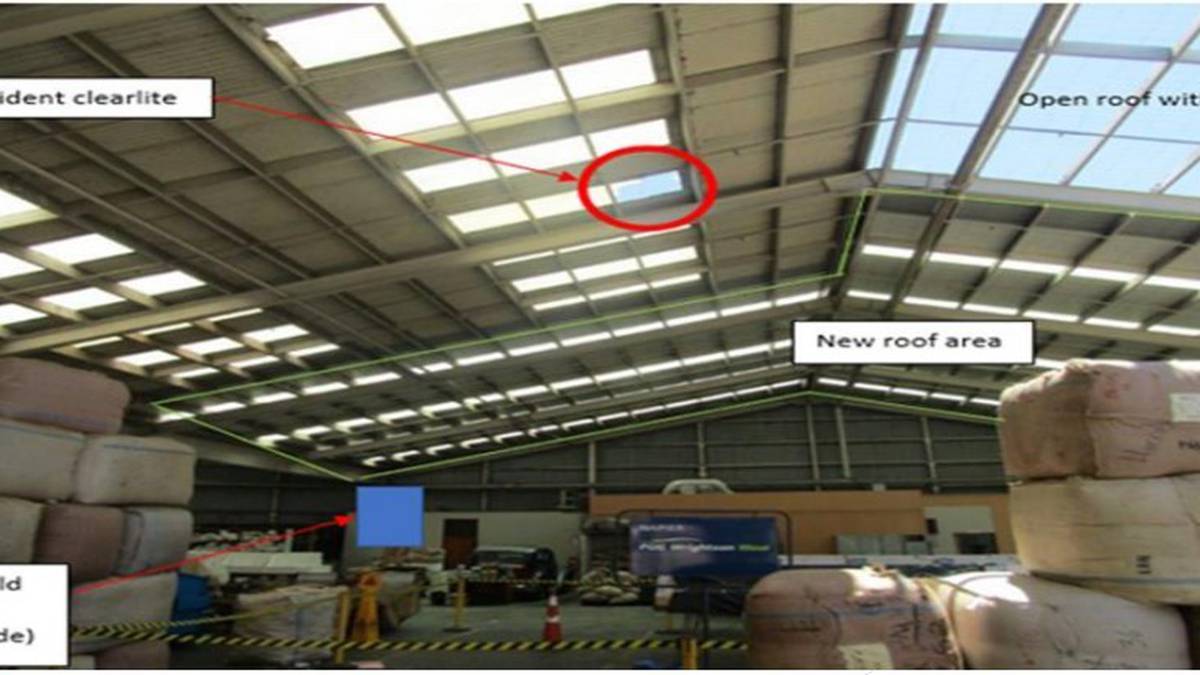 A diagram from the Worksafe summary of facts, showing the inside of the woolstore where the boy fell. Photo / Worksafe NZ

A 14-year-old boy was on the first day of a summer holiday job when he fell 8m through a roof skylight, breaking numerous bones in his body.

The teen, who can’t be named, spent nine days in hospital following the workplace accident in Napier.

“It is a miracle he survived,” said Kitty Opetaia, lawyer for the health and safety regulator Worksafe New Zealand, which laid charges against the company which hired the boy on a roofing job.

Opetaia said in the Napier District Court that, given his age, the boy should not have been up on the roof in the first place.

The Waipukurau-based company Ironhide Roofing was on Tuesday ordered to pay $25,000 in fines and $40,000 in reparations on two charges of failing to ensure the health and safety of workers, and failing to ensure its workers were not under the age of 15.

The boy who fell, whose name was suppressed by Judge Bridget Mackintosh because of his age, was one of two 14-year-olds who were working on the roof of the woolstore in Napier’s Pandora industrial district on December 14, 2020.

It was the boy’s first day of a summer holiday job. The workers made a 5.30am start and the boy fell through the skylight about 10am, after the morning tea break.

The boy was in hospital until December 23, and Judge Mackintosh described the fall as a life-changing event which disrupted his schoolwork and his ability to play sport.

She said the boy’s mother allowed him to take the job with the best of intentions, and believed that in doing so she was doing the right thing by her son.

“When she heard about the accident she was devastated,” the judge said.

Judge Mackintosh said the $25,000 fine would be paid in instalments over five years. It was divided into $20,000 for the first charge of failing to ensure safety, and $5000 for hiring an under-age worker.

According to an agreed summary of facts, one of the company directors, Wade Thompson-Tuhi, told an interviewer that he did not know how old the boy was before hiring him for the holiday job.

However, Worksafe said it would have been reasonably practicable for him to ensure that the boy was aged 15 years or older.

The summary said that after morning tea, the two boys helped an older worker carry rolls of roofing paper up a scaffold alongside the PGG Wrightson building where they were working.

They were not wearing any safety gear such as harnesses or helmets, only high-vis tops and work shoes.

After putting the paper on a ridgeline, the boy stepped onto a skylight.

The other boy heard a cracking sound and went to grab his workmate, but he had already fallen through the roof.

The older worker looked through the hole and saw the boy lying on his stomach below, with a lot of blood around him.

Inside the woolstore, Thompson-Tuhi was talking to someone and also heard a loud crack.

He looked up to see the boy’s legs poking through the roof. He saw him fall and hit the ground.

Ironhide’s counsel, Brett Harris, said that a hazard management plan had been put into place and that the boy had “taken a couple of steps in the wrong spot”.

But Worksafe said that best practice guidelines for working on roofs included physical barriers to keep workers away from brittle areas, along with walkways and crawlboards.

WorkSafe released a statement following the sentencing stating the case underscored the dangers of skylights.

“Working from height is a well-known risk in the construction industry, and there is no excuse for not putting proper protections in place,” said WorkSafe’s national manager of investigations, Hayden Mander.

“This incident has had a significant effect on the victim’s health, and could easily have been prevented with some better planning.”

The company directors declined to comment after the hearing.