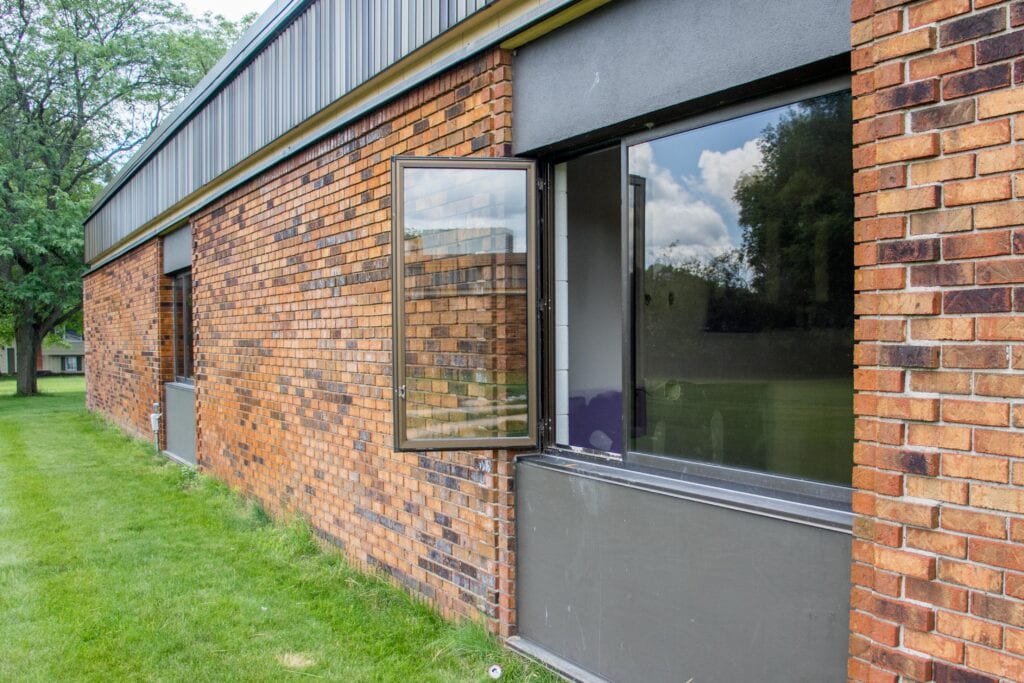 While work continues this summer on the renovated front entrance at Greenville Middle School, at right, another improvement project, utilizing federal COVID-19 relief funds, will see that exterior windows, at left, throughout the school are replaced. — DN Photo | Cory Smith

GREENVILLE — As construction continues on more than $10 million in renovations and improvements at Greenville Middle School, a little more funding will be coming the school’s way.

During a special meeting of the Greenville Public Schools Board of Education on July 2, the board voted unanimously to approve as much as $455,000 in additional improvements specific to replacing windows and doors throughout the middle school.

While the previous $10 million-plus in construction work is being performed as part of the $46.4 million bond approved by voters in 2017, in which renovations and improvements are being implemented throughout the school district’s seven school buildings, this latest expenditure comes directly from the Elementary and Secondary School Emergency Relief Fund (ESSER Fund), which are federal relief funds designed to address the impact of the coronavirus pandemic.

According to Superintendent Linda Van Houten, the ESSER funding, of which the district has received several million throughout 2020 and 2021, must specifically be used in relation to COVID-19.

To date, Van Houten said the majority of those funds have been spent on technology for virtual learning and cleaning and sanitary purposes to keep the schools’ buildings safe for in-person learning, but she stressed that in replacing windows and doors, the project also qualifies in utilizing the federal funding.

“This was not originally in the bond project, but we have realized there is a real need in replacing these windows,” she said. “It will help us with air control throughout our building, which does help us with keeping the virus at bay as much as possible.”

Van Houten said the special meeting was held in order to have the bids approved as quickly as possible, to allow the work to be completed concurrently with current bond construction in the hopes that work in classrooms is finished prior to the end of the calendar year.

“As busy as construction is right now, it’s a very unique schedule for us because we want some things done fairly quickly,” she said. “Having said that, we were pleasantly surprised with the bids that came in.”

For demolition work, a bid of $61,221 from Abatement & Demolition Services of Milliken was accepted, which was the lowest of the two bids, the second coming from Reese Contracting of Wixom at a cost of $248,300.

For Masonry work, a bid of $39,914 from Burggrabe Masonry of Belding was accepted, which was the lowest of two bids, the second coming from JK Masonry of Comstock Park at a cost of $173,469.

For window replacement, a bid of $241,600 from Vos Glass of Grand Rapids was accepted, which was the lowest of the four bids. 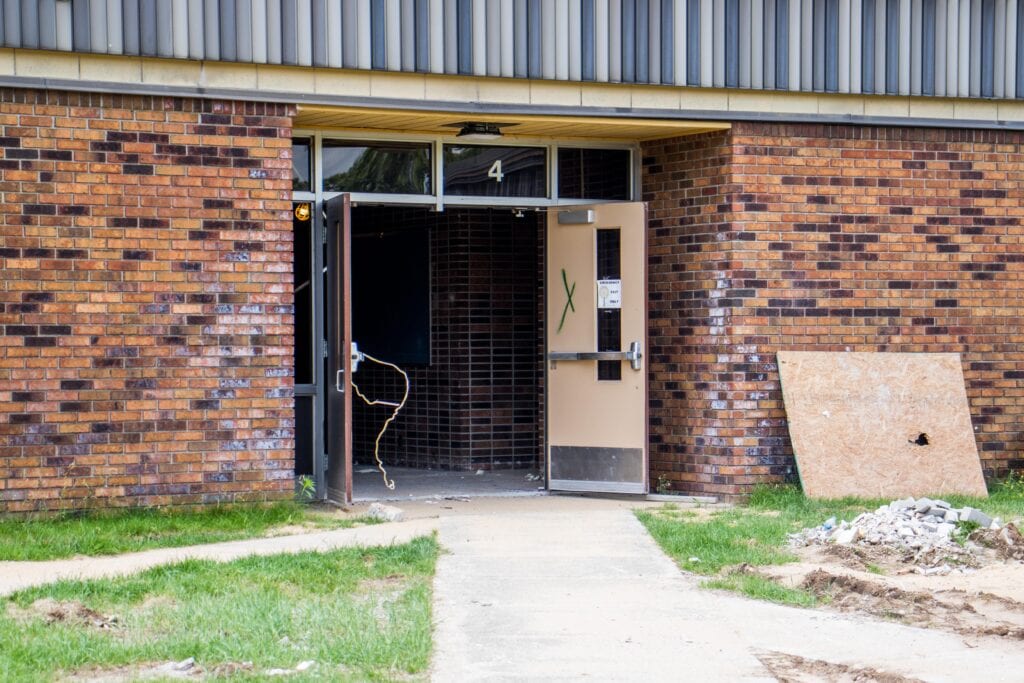 According to Construction Manager Marty Schultz of Clark Construction Co., one of the reasons for the large discrepancy in bid prices from low to high was because several of the contractors are already working at the site, resulting in lower costs overall.

“All of these contractors are on the job site right now,” he said. “By getting the contractor that was already here, we can leverage that (time). I think that’s why you see a big difference in the demo number, especially.”

Schultz said in having spent months working throughout the middle school, he agreed with Van Houten that the windows and doors were in need of replacement.

“We noticed during construction if there was one thing we’d add to this (project) it is windows and doors,” he said. “They leak and there’s mold.”

While Schultz said he is hopeful much of the work will be completed this summer, the entire timeline for all current construction at both the middle school and high school will not conclude until the end of the calendar year.

“We want to do the brick repair at all the window openings that need it, prior to the kids getting back, so they don’t have all that noise,” he said. “When we start school, we will not start on the windows, because while window trims normally take four to five weeks to receive, they are now up to nine weeks. So we had to get moving on this in order to be done by the end of the calendar year.”

Schultz anticipates classrooms can be completed two at a time and in the span of a day.

“We will empty the classrooms for one day, take out two classroom windows, put new ones in, and we are done in one day,” he said.

While the project is estimated to cost $382,896.04 per the bids, the board voted to approve up to $455,901.19, in order to factor in increased alternate bid packages that may be needed, depending on how construction goes.

The board expressed excitement about the project, stressing the fact that it is not using general fund dollars provided by local taxpayers.

“This is an awesome opportunity for the district to get this type of work done with federal funds, not with our bond monies or anything else,” Board Secretary Ron Billmeier said. “It’s the kind of work that tends to get put on the back burner too when you want to get stuff done. To finish off all of that exterior, the windows and doors that we have, I think that’s a good thing.”

Van Houten plans to present official numbers regarding the spending of ESSER funds at tonight’s regular meeting of the board.

“The majority has been for extra custodial services, cleaning supplies — it’s all very COVID-related,” she said. “There’s been no additional staff that didn’t apply to a COVID need that we had.”