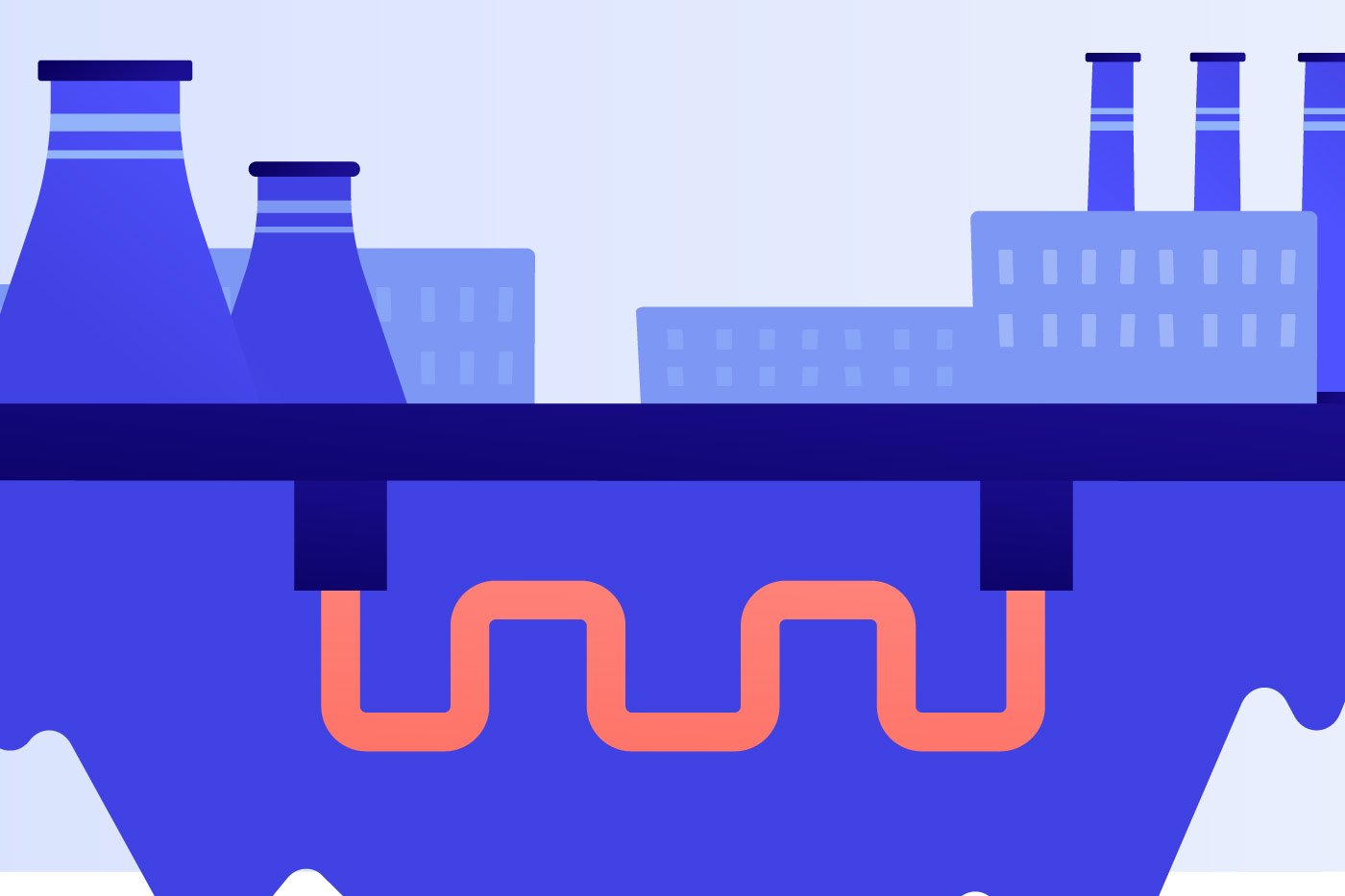 Geothermal activity has been shaping the Earth since its inception, creating the very land we reside on. Today, technology is harnessing subterranean heat to power a new wave of green energy production. The earth’s primal heat source will play a major part in our future. The latest report from the International Energy Agency shows the technology, pioneered more than 150 years ago, is finally gaining a foothold in the 21st century.

The first geothermal heating system was installed in Boise, Idaho in 1892. Today, there are 23 geothermal heating districts across the United States, powering 1.7 million units. About 40 percent of those installations are residential, while 60 percent are commercial or institutional. The United States is the global leader in geothermal capacity, outputting roughly 3.6 gigawatts in 2020, close to 25 percent of the world’s total capacity. Still, geothermal contributes less than 1 percent of overall U.S. energy generation. Thanks to new innovation and a push towards green energy, the IEA’s latest Geothermal Report predicts geothermal energy capacity will grow 26-fold by 2050. Geothermal isn’t an end-all solution, requiring geothermal activity means for many parts of the country it isn’t possible to harness, but it can play a major role in meeting climate goals.

“I am proud of what geothermal is and excited about where it’s going. Sharing the geothermal narrative with new stakeholders as we embark on a new geothermal chapter is critical, and the contents of the IEA reports are central to that story,” Dr. Susan Hamm, Director of the Department of Energy’s Geothermal Technologies Offices said.

Geothermal heating requires a certain level of subterranean geothermal activity. That’s why about 90 percent of the current geothermal energy capacity is in California and Nevada, where mountain building and volcanic activity has occurred recently, at least in geological terms. The GTO GeoVision, a report on the future of geothermal energy, shows the potential for 17,500 districts nationwide, capable of supporting 28 million geothermal heat pumps producing 60 GWe by 2050, more than 8 percent of the national energy capacity. Assessing the feasibility of geothermal heating is an important first step in adoption.

“New York State now has one of the strongest climate change laws in the world. In order to meet this ambitious challenge, stakeholders will need to be proactive, and our businesses and building owners will need the tools and incentives to help them adapt. GeoPossibilities is just the latest of many programs offered by NYSERDA to help move us towards a stronger and more sustainable future,” Michael Romita, President and CEO of the Westchester County Association said.

Geothermal energy is harnessed by heat pumps, a relatively simple technology. The first heat pump was theorized by Lord Kelvin in an 1852 scientific journal. His thought process wasn’t complicated. If you could harness the heat coming off a fire or an engine with an air current, you could use it to more effectively heat buildings. Kelvin’s idea was originally focused on making coal fires more efficient. Nearly 150 years ago, HVAC still operates by the same basic principles. Modern geothermal heat pumps are poorly named because they do more than heat, they can also cool.

A geothermal heat pump starts by drilling a well below the structure, the key is having a ground temperature that stays around 50 degrees year-round. A loop is installed, either vertically or horizontally, filled with groundwater or antifreeze, that gets pumped back up to the structure. From there, the basic refrigeration cycle at play in every fridge, A/C unit, or radiator begins. In the winter, the heat from the subterranean fluid is transferred to a closed loop of liquid refrigerant which gets compressed by electricity, turning it into a gas, making it hot in the process. A fan blows across the coils, heating the space with the hot air. The fan cools the liquid, restarting the process and fueling the cycle. In the summer, that process is reversed by pumping the refrigerant in the opposite direction.

Absorption pumps are common in commercial and industrial settings. The main difference between traditional heat pumps is absorption pumps use an ammonia-water absorption cycle, requiring less pumping power. A heat source, like geothermal hot water or solar energy, is used to boil the ammonia out of the water, recovering the heat and starting the cycle over. Natural gas is the most common fuel source for absorption pumps, leading to the devices being commonly known as gas-fired pumps, but renewable sources of heat generation are feasible. Absorption pumps using geothermal heat have the potential to make geothermal pumps even more efficient.

Both processes are still operating by the principles of every HVAC system but much more efficiently. The key is in the steady ground temperature. Systems don’t have to work as hard when the temperature difference isn’t as severe. When it’s 10 degrees outside, a traditional heating system relying on outdoor air is having to adjust the temperature by nearly 60 degrees compared to just 20 degrees for a geothermal system using the ground’s latent 50-degree temperature. The system is saving energy by transferring heating or cooling between the structure and the ground. Though they’re more expensive to install because they require drilling, geothermal heat pumps reduce energy usage by 30 to 60 percent and help control humidity more than air-sourced pumps.

The process still requires electricity to operate the pump and much of the electrical grid power in the United States is still powered by fossil fuels. Increasing the efficiency of heating and cooling lowers grid demand, saving electricity. Centralizing renewable power generation at the nation’s few thousand powerplants and distributing that energy through electrification is an easier problem to solve than tackling furnaces and fossil fuel burning energy sources at millions of structures.

Drilling is the biggest obstacle to the wide adoption of geothermal energy. Drilling represents about 50 percent of the cost of geothermal development, according to the IEA. The Frontier Observatory for Research in Geothermal Energy (FORGE) led by the University of Utah is working with researchers at Texas A&M on the Efficient Drilling for Geothermal Energy (EDGE). Drilling takes a long time and burns through costly drill bits. The team of Aggies was able to design workflows to average 40 feet per hour with drill bit life exceeding 700 feet per run. The work is just one of seven projects funded by the GTO to advance geothermal drilling developments. The GTO is also developing deep direct-use (DDU) systems that can tap into geothermal resources at lower temperatures, expanding the geothermal potential into more areas.

A large-scale DDU system has yet to be tested, but the potential is immense. DDU technology “can potentially be used to replace conventional district heating and cooling systems in military installations, hospital complexes, office buildings, hotels, and other large energy end-uses, expanding geothermal as a renewable thermal energy in large portions of the United States,” according to the IEA. Cornell University is testing DDU for its power needs, tapping into the Appalachian Basin beneath the campus.

Innovation will struggle to overcome logistical problems. Any roughneck can tell you, drilling is a loud, messy business. You can’t drill into existing structures. Geothermal energy is perhaps best suited for ground-up developments where intensive drilling can be done freely. Despite the technology being more than a century old, the commercial geothermal energy industry is still in its early stages. Steep upfront costs have limited applications, used in luxury custom homes or facilities large enough to benefit from the efficiencies. Technological improvements aimed at installation and storage will help change that.

Dandelion Energy, a spinoff of Google’s X Lab, has been working to bring geothermal energy to homes by lowering the cost through commercialization. The company’s proprietary drilling techniques, heat pumps, and smart remote monitoring have reduced the installation cost of geothermal systems by more than 60 percent, according to Dandelion. Bill Gates’ Breakthrough Energy Ventures was part of a Series B funding that raised over $30 million. Dandelion is focused on the residential market for now, but the innovation the company is pioneering will likely have larger commercial applications. Dandelion’s system uses smaller drilling equipment, getting in where conventional rigs cannot. The rigs are also less disruptive and cleaner than conventional systems. Costs for an average 2,000 square foot home range from $18,000 to $25,000. A traditional furnace and central air conditioning set-up will run around $12,000. The difference can be saved in a few short years by eliminating fuel costs, which the U.S. Energy Information Administration estimates can average between $600 to $1,200 per year.

The potential for geothermal energy is immense. Like sunlight, it is nearly impossible to exhaust the heat of Earth’s core. Geothermal energy production has continued unabated at sites for decades. The Lardarello field in Italy has been in operation since 1913. Geothermal energy is not a panacea, it’s one critical part of a variety of renewable energy solutions needed to transition production towards sustainability. Sometimes to grasp the future, we must look to lessons of the past.