Workers from Weathertight Roofing Inc. hoist waferboard sheets up to the roof of the Franklin ZCMI building on Monday Oct. 17, 2022.

FRANKLIN – One of the oldest buildings in Idaho is having its roof replaced in Franklin. One of the Zions Co-operative Mercantile Institution buildings still in existence is beginning the restoration process. Weathertight Roofing Inc, from Caldwell, Idaho is taking the old roof off of the ZCMI in Franklin and installing a new one.

A photograph of the sign common on all ZCMI stores hung on the Franklin store before the restoration began.

On Monday, workers tore off the cedar shingles and began the process of putting a new roof on the stone 153-year-old building.

He thought the boards underneath the shingles was the original board that were cut from the local forest. They were adding waferboard to strengthen the roof and attach the new shingles to it.

“We have the contract for this and other building in the state,” he said. “We have roofed other historic buildings in the state and some were are not historical sites.”

He named the Cataldo Mission built in 1853 at the city of Cataldo as the oldest, then the Pierce Courthouse built in 1862 in Pierce, the Sticker Stage Stop in Hansen which was built in 1864, then Franklin ZCMI building.

Susan Hawkes, the Franklin Historical Site Coordinator, said the building is the oldest of the early ZCMI’s still in existence. Brigham Young started the ZCMI and had as many as 178 stores, one in most of the major communities scattered throughout Utah and Idaho. 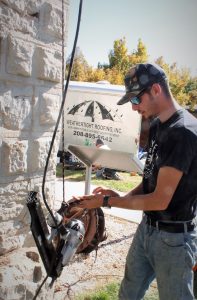 Antonio Serpa hangs a nail gun to a line to be hoisted up on the roof of the ZCMI building in Franklin on Monday Oct. 17, 2022.

“They began to build this one in Oct 1868 and by March of 1869 it was open for business for about 20 years,” she said. “Each community was supposed to have one. Even Logan had one.”

They are starting the restoration project from the top down. Once they get the roof finished they can start working on other parts of the building. Some of the stonework needs to be repaired and the plaster on the interior is failing.

“This is a big deal. The walls on the inside are crumbling and the roof needs to be restored to protect what’s left of the interior,” she said. “Eventually, they will do all of the rock and the facia.”

The building is significant to the community because of the of large Church of Jesus Christ of Latter-day Saints presence at the time.

“Cash was tight back then, and they could do so much work and get credit towards a purchase of goods,” Hawkes said. “It was a way for people to work and not need cash to buy what they needed.”

The Historical Site director said she is having the sign that hangs over the front door repainted. It’s a half circle that has a prominent beehive and eye painted on it. The sign was common for the early ZCMI cooperatives.

The beehive was a symbol of thrift, industry, and unity among church members, all principles associated with the early Saints. The all-seeing eye was defined as a symbol representing the omniscience of God and His ability to perceive all things. The Heavenly eye can be found on many Latter-day Saint buildings. 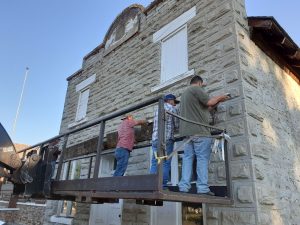 Volunteers from Ritewood Eggs taking down a sign that hung on the historic ZCMI building in Franklin earlier this summer.

Over the top the sign was Holiness To The Lord painted on the top and on the bottom Zions Cooperative Mercantile Institution along the bottom.

Hawkes hopes to have the sign up as soon as the roof is finished.

“It’s the same kind of rock used on all of the stone buildings in the area, including the earliest home of the Doney family built in 1863,” she said. “People that come to see this ZCMI building from all over the country. It is a…historical building; they take pictures of it.”