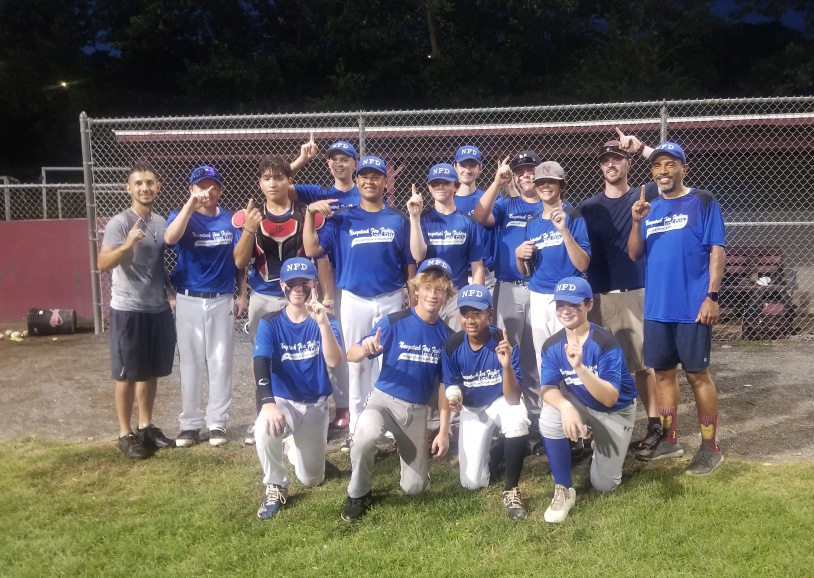 BY KEN MORSE
CITIZEN’S NEWS
Champions have a way of finding the resiliency to overcome challenges when their backs are against the wall.
The Naugatuck Firefighters battled their way through the season and it was only fitting that they took it up a notch to win the best-of-three championship series, knocking off last year’s champions to claim the Naugatuck Babe Ruth title.
The third-seeded Firefighters had to get by Sibby’s in the semifinals and escaped with a 6-5 win. It came as no surprise that when the game was on the line they rose to the occasion.
“These kids are battlers,” said coach Angel Valentin. “They won a one-run game in the semifinals and won two more one-run games in the finals. They believed in themselves and got it done. I’m so proud of them.”
Isaiah Benoit, Connor Walker and Tyler Yoxall had two hits each to give the Firefighters the lead in the series with a 4-3 victory. The Firegithers went ahead, 4-0, and Danny Keogh went six strong innings on the hill, surrendering three hits and one run. JJ Rumble and Nick Cabezas (3 hits) rallied Brown Roofing, closing the gap at 4-3 in the seventh inning before Walker came on to kick the door closed and get the save.
The defending champion Brown Roofing bounced back in Game 2 with an 11-4 victory. It was a back and forth tussle at first, with the game deadlocked, 4-4, after five innings. Evan Skirkanich (3 hits) along with Ben Weloy, Rumble and Chris Weloy two hits each sparked a Brown uprising. The defending champs plated two runs in the sixth and five more in the seventh to pull away.
After a season full of nose-to-nose battles, valiant comebacks and lopsided wins, it all came down to a one-game, winner-take-all scenario. Both teams were at their best. The teams were tied, 2-2, in the eighth inning when rain postponed the outcome for a day. Yoxall had struck out eight surrendering six hits and two runs through six innings for the Firefighters. Adam Heyward kept Brown Roofing in it, collecting four hits. Brown was batting with one out and one runner on when the game continued in the bottom of the eighth inning.
Keogh pitched out of the jam and the Firefighters managed to push the winning run across the plate in the top of the ninth, aided by a couple of errors. Brown threatened in the bottom of the ninth before Keogh finished his three scoreless innings to earn his second win of the series.
Naugatuck Babe Ruth Fall baseball signups will be held Saturday, Aug. 20, from 10 a.m. to 2 p.m. at the ION Community Room, 270 Church St. Registration is open to players ages 12 (coming out of Little League) to 15. Players aging out this season are also eligible to play. The league is open to players from Naugatuck, Beacon Falls and Prospect, and any surrounding towns not offering a program. The fee is $135. For more information, contact Dave Falzone 203-558-1441 or Gemineye671@aol.com.