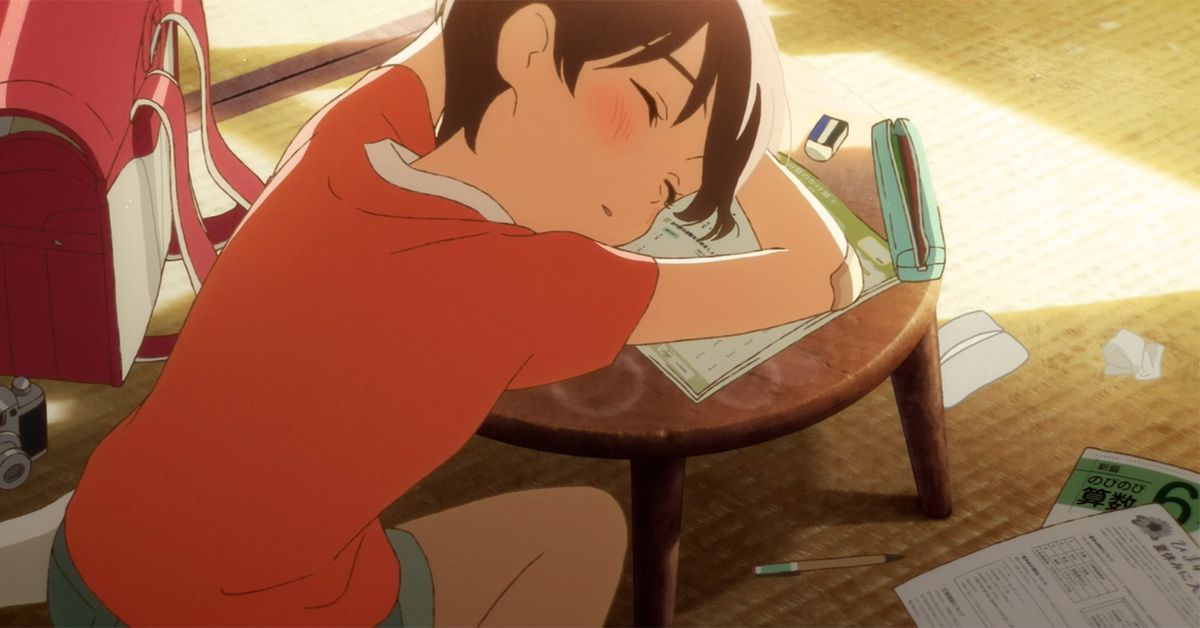 As a child, moving to a new home can feel less like an adventure than like facing the destruction of the known world. That apocalyptic feeling should seem overly dramatic in hindsight, but Penguin Highway director Hiroyasu Ishida takes it seriously and gives it a startlingly literal face in his second anime feature, Drifting Home, now streaming on Netflix. Drifting Home’s elementary schooler protagonists Kosuke and Natsume are coming to terms with the loss of their former apartment building, when it suddenly heads out toward the middle of the ocean with them and their friends aboard.

In a neighborhood on the verge of renewal, with old housing complexes slowly being replaced by new water towers and industrial buildings, the Kamonomiya apartment complex is a remnant of 1960s postwar growth. Kosuke and Natsume used to live in these “haunted apartments,” now scheduled for demolition, and reportedly occupied only by ghosts. From the start, the slow disappearance of their home is plainly symbolic of a friendship threatened by change and time. The two have drifted apart, due to an exchange of ill-chosen words compounded by diverging interests and priorities.

A beautiful but simple opening sequence retraces the friendship they used to have, walking the area backward in time to when the neighborhood was full of life. The scaffolding, mold, rust, and weathering gently disappear as the shots shift toward the past. After a quick setup at school, Kosuke and some friends journey to look at the old flats in search of the ghost that supposedly haunts it. Instead, they run across Natsume and her strange new friend Noppo, who claims to be a former resident.

Before long, a sudden downpour of rain separates them from the real world, and the dilapidated apartment complex starts floating through the ocean like a raft, with what seems like no hope of rescue. As with Penguin Highway, Ishida stages an early coming-of-age tale on the porous boundary between the fantastical and the mundane, with the world disappearing suddenly, but seamlessly. It’s an uncanny moment that feels like real magic, tied up in concise editing. That sense of uncanniness holds throughout the film, thanks to Ishida and co-writer Hayashi Mori’s good instincts to avoid getting bogged down in the mechanics of what’s happening. The story is simply driven by feeling, not explanations.

The journey becomes both a trip down memory lane and a last-ditch confrontation between the two old friends about the things coming between them. As they fumble toward mutual understanding, their friendship carries more complications than either of them realized, in part because of their shared relationship with Kosuke’s recently deceased grandfather Yasuji, who lived in the apartments since they were first built. Yasuji involved both kids in his hobby, photography, and became Natsume’s replacement for her own dysfunctional family. As Yasuji dies, so does the apartment, and Kosuke and Natsume’s friendship hits a point of its entropy. Natsume struggles to let go of her attachment to the place, which could cost her a future relationship with Kosuke.

Change is shockingly unfamiliar to the two children at this point in their lives, so leaving behind a place and the memories it contains feels like removing a limb, an idea Ishida and Mori play with in their script. The symbolism of young people becoming castaways at a transitory point in life — even the specific idea of impossibly castaway buildings — has seen a number of iterations in anime, most recently in the series Sonny Boy, directed by Shingo Natsume.

But Drifting Home is different, because of the way Ishida and Mori also ask: What if the feelings the characters have toward this place were reciprocal? Noppo is the film’s most uncanny magic touch: He’s a lanky, vaguely creepy boy who seems to be the personification of the apartment complex. Noppo’s true nature is heavily telegraphed, but the depth of his connection to the children is both novel and moving. So is the extent of his pain. He laments his abandonment: “Everyone’s gone now, but I’m still here.”

The anthropomorphization of an entire housing complex — who has his own journey to reconcile the process of losing Kosuke and Natsume to new apartments — threatens no small amount of corniness. But the story’s slightly morbid details make it work: His bones are made of concrete rebar, and his skin is being reclaimed by plant life, much like an abandoned building disappears under grasses, moss, and mold. Through Noppo, the presence of this postwar architecture becomes something ephemeral, and it’s interesting and often moving to see Ishida tackle the ways the children are confronted with these ideas of impermanence, for people and place alike.

The handsome animation production from Studio Colorido (Penguin Highway, A Whisker Away) does a lot to sell the outlandish premise. Structures shift and break with believable weight, even though the driving action is about a building floating through the ocean like a raft. To similar effect, the young characters are all drawn with slight, gentle lines. Akihiro Nagae’s designs remain down-to-earth even with the more fantastical figures that appear to the children. The photorealistic background art contrasts modernity with midcentury, postwar architecture, but Ishida’s direction doesn’t obsess over realism. It never feels at odds with the film’s sense of peril when the director inflects broad, sometimes elastic physical comedy on the characters’ interactions with these environments, like when Kosuke daringly uses a makeshift zipwire to reach an adjacent floating building, crashes through the corrugated iron roof, and bounces through the room below like a pinball.

In exploring both childish fickleness and sensitivity, Drifting Home continues the work of Ishida’s Penguin Highway: Both movies display an even hand in portraying children, in all their capacity for both selfishness, selflessness, and even wisdom. Moments of enlightenment are believably interspersed with immature impulses. Even seemingly grown-up realizations will quickly dovetail into more childish sentiments, like Kosuke being unable to help derailing reconciliation with Natsume over petty jealousy.

Once again, Ishida is interested in characters bickering and clashing, without either side necessarily being in the wrong. Each of the characters has another, less obvious side of their personality, and the film journeys toward them becoming self-aware about their feelings and more empathetic toward their friends as they shed the myopic view of the world that accompanies childhood. One girl, Reina, who moves increasingly into the film’s focus, is amusingly contradictory in this way — she postures as the adult, pragmatic member of the group, but she’s also obsessed with rollercoasters. She makes a big show of herself by constantly bragging about her upcoming trip to Florida (even wearing a Miami T-shirt as a constant reminder), but it’s quickly made clear that the bluster is a childish bid for Kosuke’s attention. As a result, she becomes keen to shoot Natsume down at every opportunity. Reina is a window into Ishida’s compelling approach to writing children — often as capable of being self-absorbed brats as they’re capable of dispensing straightforward wisdom, and never villainized either way.

There’s enough liveliness to Drifting Home that two hours in a single location against a minimal background doesn’t actually feel like overkill — the apartment is made to feel expansive, and the kids end up drifting past other abandoned buildings that become chances for adventure. The movie doesn’t quite manage to maintain intrigue in the same way that Penguin Highway’s amusing avian hijinks do, especially with that film’s gradually unspooling scientific approach to its fantasy. But the adventure in Drifting Home is compelling regardless, making up for that absence of process with some very real peril, as the kids have to search for food to survive as castaways.

In spite of the generally strong character work, Ishida and Mori do hit repetitive notes between the other characters, as they become more tightly wound from panic and scream at each other with increasing frequency. That tension hits diminishing returns quite quickly. But at least such moments feel like a fairly believable portrayal of children stranded on their own, especially during a race against time to scavenge for food.

While the overall journey is smartly and sensitively realized, there are points where Drifting Home does feel (appropriately!) a little lost at sea, as its characters wrestle between youthful impulses and empathy for their friends. Regardless, the film is admirable for its patient commitment to unpacking the children’s feelings about each other, the building, and other relics from their pasts, all as they learn how to carry their attachments and memories to new places.