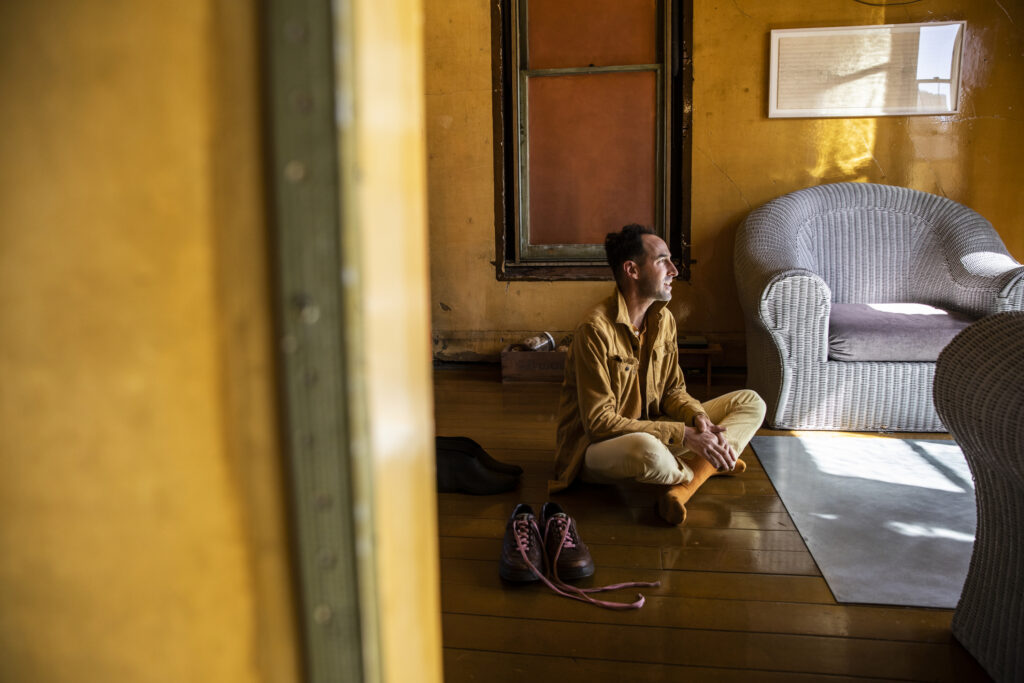 The David Ireland House at 500 Capp St. is closed Sundays, but artist David Wilson arrived May 2 with his own key to the front door. He jiggled open the old door lock to the 1886 Victorian and dashed across the entryway to disable the alarm as if he owned the place. For the last four months, he essentially has.

In a circumstance made possible by the COVID-19 lockdown of museums and cultural institutions, Wilson, 38, has been alone in this residential monument to the conceptual artist Ireland, who made his home in the Mission his lasting artwork before dying in 2009.

Artist David Wilson sits to meditate before starting his day inside the house, where his solo exhibition, “Sittings,” is being shown after four months of residency. Photo: Stephen Lam, The Chronicle

Wilson is the first full-time artist-in-residence since the David Ireland House opened to the public in 2016. His solo exhibition, titled “Sittings,” debuted Saturday, and it is an artwork unique to both its location and the city as a whole. Wilson spent day and night making an installation of drawings, texts, maps and mixed-media documentation to enhance all the sculpture and paintings and drawings that Ireland left behind.

“I try to relate to the house as a house in addition to it being an artwork,” said Wilson, describing his last four months as “an intense period of interaction with the house and with David Ireland, which are one and the same.”

Wilson went to great lengths to make himself one and the same, too. Each morning he’d arrive wearing various shades of amber, in order to match the polyurethane plastered walls Ireland put in dozens of layers. 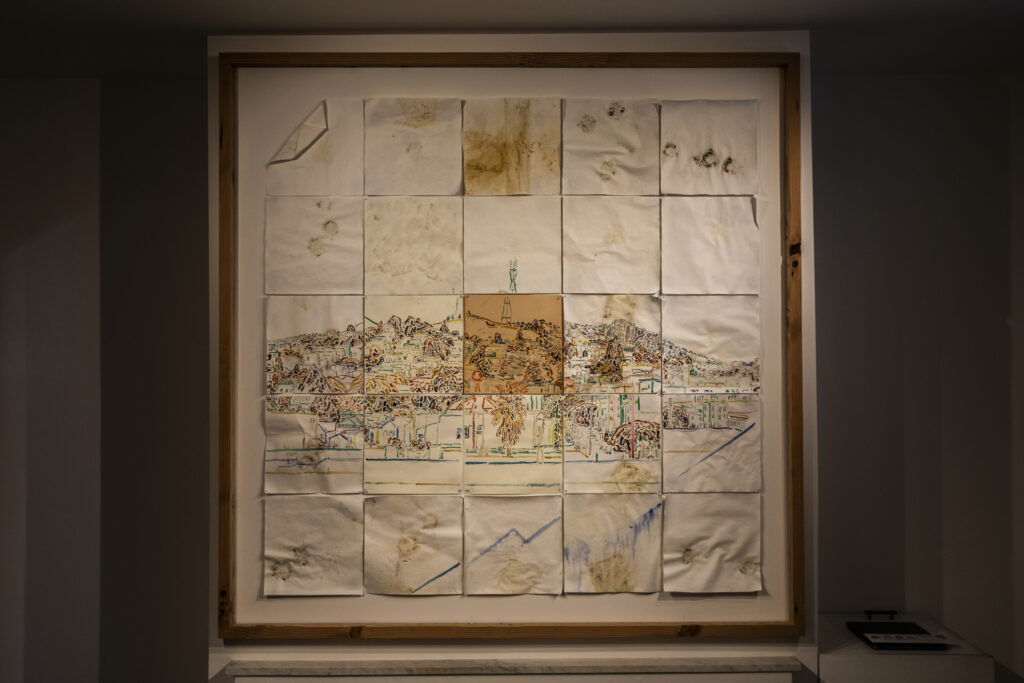 His first stop after deactivating the alarm was to climb the narrow stairs to the front parlor where he would take off his amber shoes and place them right next to the shoes left behind by Ireland. Then he’d activate the “Sittings” aspect of the title by kneeling on the mat and meditating while looking out the window for 20 minutes, “just to center myself in the space before getting to work.”

Then he’d use a folded piece of paper to write out his orders for the day, which he calls a “score,” in the same way a score is used for a symphony. His first score, on Feb. 1, was to draw the view out of every window in the house, 29 of them.

“It’s a conceptual gesture,” he said. “You write the idea and then enact the idea. That is a form David Ireland practiced.”

The resultant ink and water color drawing of the 29 windows lay in an accordion book, which is fitting since there was once an accordion maker in the house. It is just one piece among 35 separate works. Wilson took advantage of the two-story corner building, plus the attic, accessed by climbing a wooden barn ladder, and even the roof, where he set up a bench to paint the cityscape. 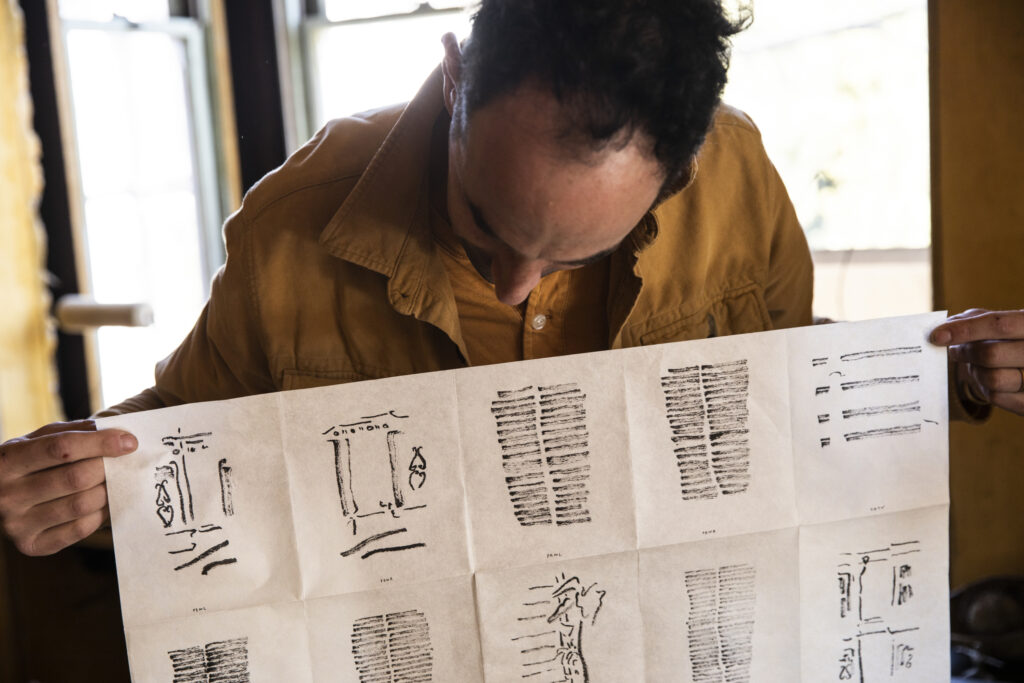 Wilson displays his hand-drawings of each window at the house. Photo: Stephen Lam, The Chronicle

He also took advantage of all hours, usually arriving by 10 a.m. after dropping his son Henry at pre-school in Berkeley and crossing the bridge. He’d leave at 3 p.m. to pick up Henry. After his boys — Henry and Sal — were put to bed, he’d return to the house for the night shift.

The house, a warren of small rooms, is only lit by the dimmest of bare bulbs. “At night there are some sounds and feelings that indicated that Ireland is still here,” he said. “He worked himself into these walls, and his hand is on every surface.”

If he needed extra atmosphere, there was always the portable cassette recorder featuring Ireland describing his own view out of a side window right before he replaced the cracked glass with a copper plate. 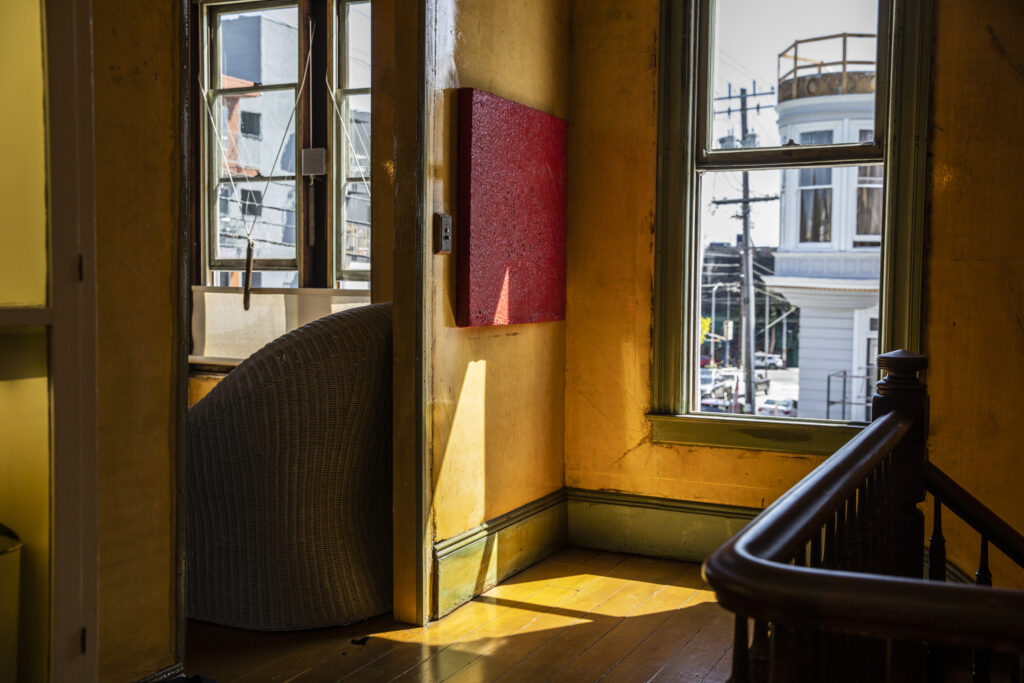 A red enamel and concrete painting by Ireland is seen by the staircase at the house. Photo: Stephen Lam, The Chronicle

Wilson would even go so far as to lay down on the bed in the guest bedroom, not wanting to disturb the ghost of Ireland, who Wilson imagined lied on his own bed.

“The creepy night has its own quality,” Wilson said, “and one quality is the presence of David Ireland.”

The exhibition runs through July, and now that the house is installed, Wilson is out in the neighborhood placing sound recordings and poetry to be tucked away at sites that can only be found by picking up a map at the house during tour hours or on Saturday afternoons, when anyone can walk in.

You might find Wilson hanging around, blending in with the walls. He has stories to tell, and the best one might come at the end of his residency, in late July, when he and Henry plan to do a sleepover, the first since the place opened. 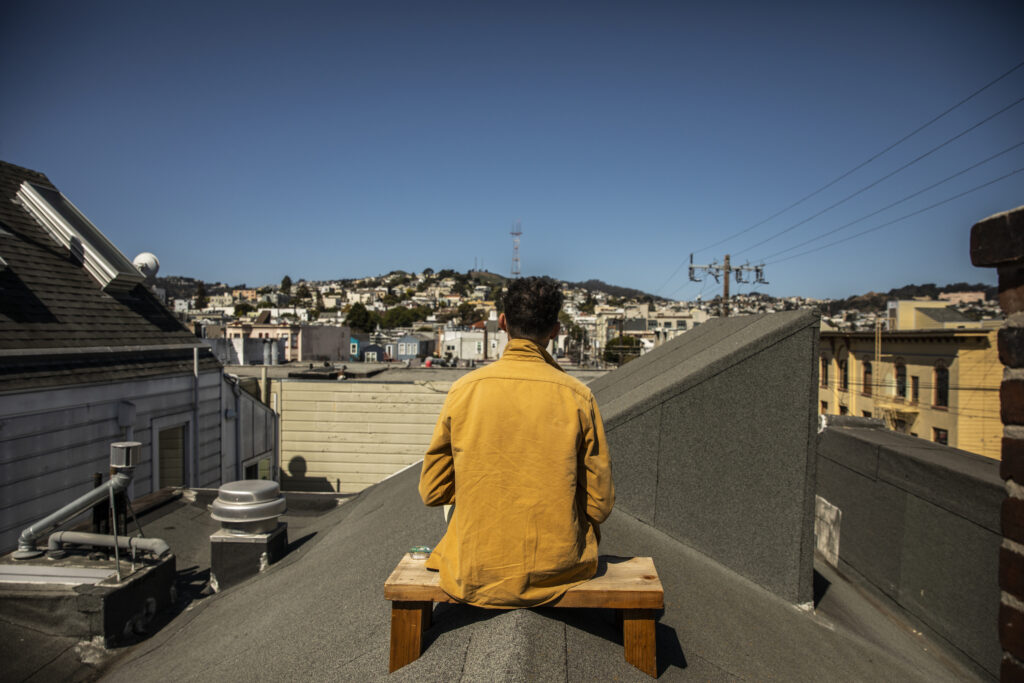 Wilson creates a drawing from the roof of the house. Photo: Stephen Lam, The Chronicle

“It will be the final act of communion with the house,” he said.

From the outset, the David Ireland House was always intended to have an artist-in-residence program. Founder and benefactor Carlie Wilmans even explored the possibility of expanding the site. But any number of factors and reorganizations prevented it until now, an event largely aided by the pandemic. The same week that sittings opened, Wilmans retired from the Board of Trustees after 13 years and $6 million.

Director Cait Molloy said the board intends to keep the residency program going, though it will be hard to follow the dedication of Wilson, who put in 300 hours alone.

“The residency shows that David Ireland’s work and way of living is still relevant and will inspire many generations of artists to come,” said Molloy.