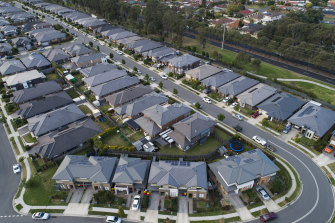 Dark roofing will be banned in Sydney’s south-west growth area in an attempt by the NSW government to dial back the heat island effect while providing sorely needed new homes.

Lighter coloured roofs will be a mandatory part of the planning controls for the Wilton area, busting the march of Colorbond Ironstone that has long been synonymous with Australian urban sprawl.

The dark rooftops of Sydney’s urban sprawl will come to a halt under new government regulations.Credit:Nick Moir

Residential lots must also be big enough for a tree in every backyard under a new set of rules applauded by urban-heat scientists as a step towards addressing rising temperatures following the grim picture painted by the latest Intergovernmental Panel on Climate Change report.

NSW Planning and Public Spaces Minister Rob Stokes said the report showed if the planning system didn’t take the construction of buildings and infrastructure more seriously, there could be catastrophic impacts on health, the economy and environment. He said Wilton demonstrated how the issue could be confronted.

“Western Sydney already experiences blistering temperatures of over 50 degrees in summer. The need to adapt and mitigate urban heat isn’t a future challenge – it’s already with us,” Mr Stokes said, adding the report would also be used to influence the government’s major city-planning draft policy, Design and Place.

“When designing lots for detached housing, we need backyards which are big enough to plant a tree or have a garden. We need to say goodbye to the trend of having dark roofs that not only attract and retain heat and raise ambient street temperatures, but lead to astronomical electricity bills because of the need to cool homes.”

As well as requiring light-coloured roofing, the development controls prescribe that for a residential lot of 15 by 18 metres, there needs to be a tree of at least eight metres mature height in the front and backyards, among rules for various lot sizes in the area where more than 9000 homes are expected to be built.

Western Sydney University urban heat expert Sebastian Pfautsch has gauged the canopy cover of various suburbs and found a section of Marsden Park, in the north-west, has one per cent, while parts of Wahroonga, on the upper north shore have more than 60 per cent.