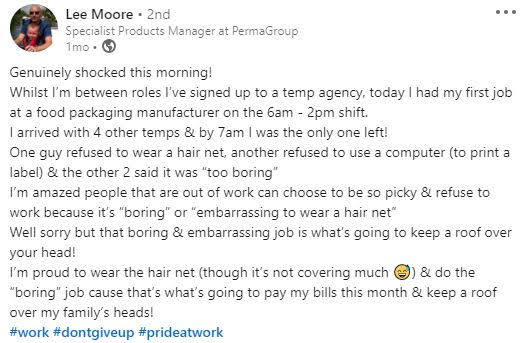 A DAD’S furious LinkedIn rant about his fellow “shocking” agency workers has seen him land a full-time job.

Lee Moore, 36, was working as a temp at a food packaging plant when he was left stunned by workers whingeing about needing to wear hair nets and complaining the work was “boring”.

The dad shared an update on LinkedIn

The dad, from Nottinghamshire, blasted the “picky” workers on LinkedIn – pointing out the job helped keep a roof over his family.

His post has since gone viral, seeing him land a full-time job thanks to his work ethic.

Mr Moore had signed up to a temping agency and was placed on a 6am until 2pm shift alongside four others.

However, by 7am Lee was the only agency staff member still standing – after the other four quit within the first hour.

Stunned by what he saw, he took to the business social network to vent, posting: “Genuinely shocked this morning.

“Whilst I’m between roles I’ve signed up to a temp agency, today I had my first job at a food packaging manufacturer on the 6am – 2pm shift. I arrived with 4 other temps & by 7am I was the only one left!

“One guy refused to wear a hair net, another refused to use a computer, to print a label & the other 2 said it was “too boring”.

“I’m amazed people that are out of work can choose to be so picky & refuse to work because it’s “boring” or “embarrassing to wear a hair net Well sorry but that boring & embarrassing job is what’s going to keep a roof over your head!

“I’m proud to wear the hair net (though it’s not covering much) & do the “boring” job cause that’s what’s going to pay my bills this month & keep a roof over my family’s heads! #work #dontgiveup #prideatwork.”

His message peaked at 120,000 likes, 5,000 comments, and hundreds of job offers – including one from Adrian Buttress, managing director at Derbyshire-based roofing firm PermaRoof. 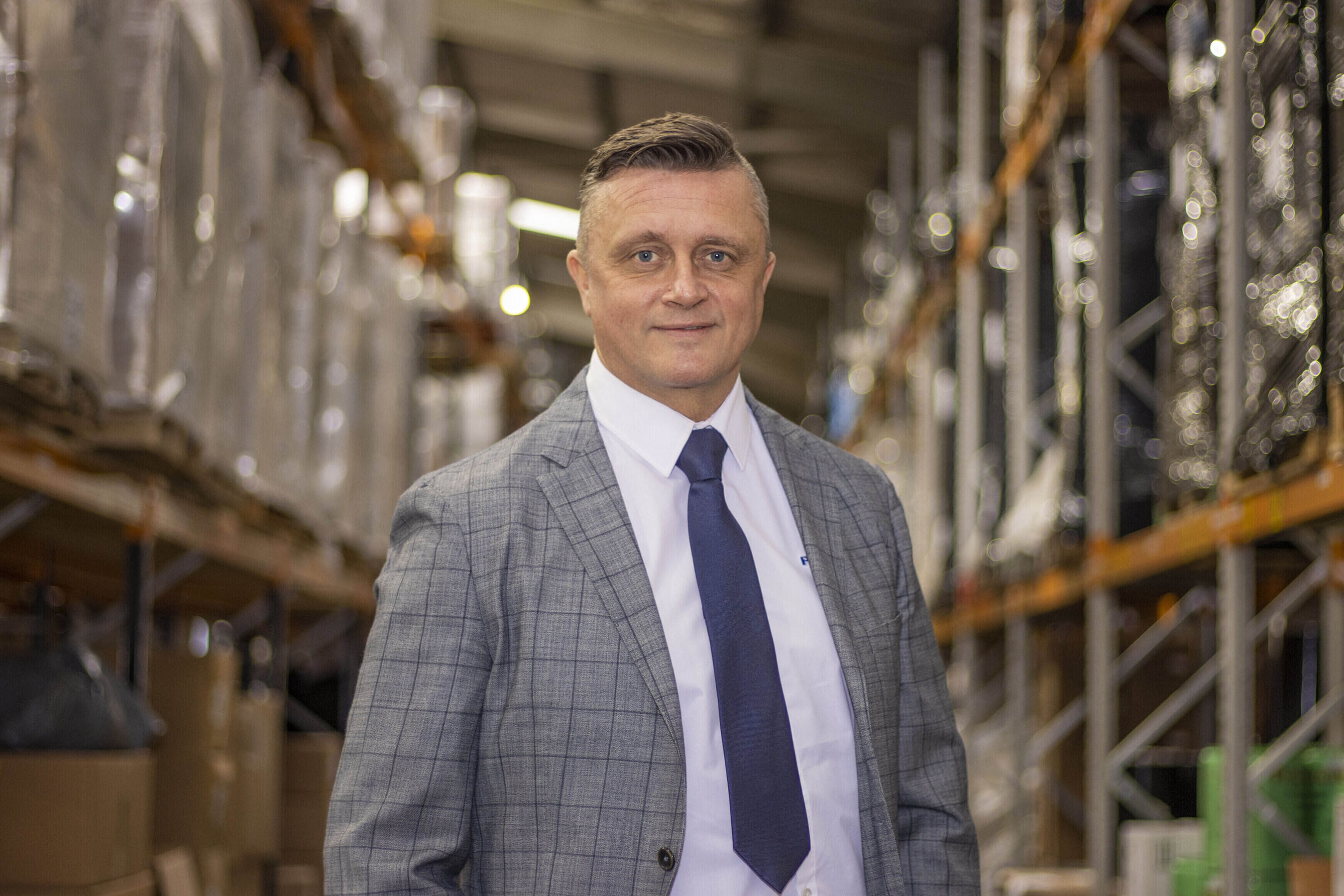 Lee, who has a nine-year-old son, said “I was in the middle of interviewing for a role at a company in Chesterfield. However, this got pushed back due to Covid, so the recruiter said they could sign me up for some temporary work with an agency.

“I was amazed that people out of work could be so picky; for me, a job is there to keep a roof over my family’s heads, pay the bills and provide food, so I was proud to wear my hair net.

“I vented my frustration on LinkedIn – it was only supposed to be a rant, but it ended up going viral. In fact, I am still getting notifications for it today, more than a month later.

“It was mind-blowing to see how far it ended up travelling; I had hundreds of messages from people offering support and opportunities.

“One of them was from Adrian at PermaRoof saying he was interested in having a chat. I had a couple of interviews and he made me feel the most wanted. He was very transparent about where the company was heading and really went the extra mile, showing me around the PermaRoof headquarters, which ended up being just a few miles away from my home.”

Lee, of Kirkby in Ashfield, previously worked in sales for hire and construction companies. He has now joined PermaRoof as a specialist products manager.

Adrian Buttress, managing director at the PermaGroup said: “I believe in hiring on attitude as everything else can be taught. When I came across Lee’s post on LinkedIn, I knew I had to speak to him.

When I discovered he had previous sales experience and lived just down the road from our head office, it seemed like fate.

“Lee had hundreds of job offers, so I am truly delighted that he chose to come and join the PermaRoof team. We’re extremely happy to have him with us and know he’ll do a fantastic job building our customer base for the modular division.”

Get your dreamed roof with Four Leaf Roofing in Ripley, Tennessee