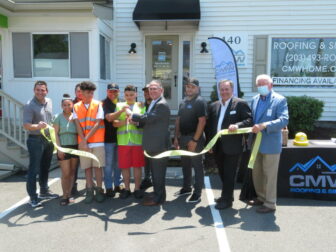 MONROE, CT — Henry Guzman worked hard to get his roofing and siding business off the ground 13 years ago — and the clock was ticking. He had just lost his job soon after closing on a house in Trumbull, and his wife, Yanitza, had recently given birth to the couple’s first child.

Fast forward to 2022. Guzman stood proudly in the parking lot of CMW Roofing & Siding’s new Monroe headquarters at 440 Main St. His business, which also cleans gutters, has now been thriving for over a decade.

The team at CMW Roofing & Siding poses for a photo in front of their new headquarters at 440 Main St. in Monroe.

Guzman and his wife have two children, son Aiden, 13, and Guzman’s stepdaughter, Daisha, 30.

“It was a lot of hard work,” Guzman said of starting his own business. “It’s still a lot of hard work. We’re moving in the right direction. I have no regrets,” he added with a smile. “I would do it all over again.”

Yanitza is CMW’s office administrator and the operations lead is David Fraga. While dealing with their customers, Fraga said the staff at CMW Roofing & Siding always strives to live up to their three core values: honesty, integrity and professionalism.

“We’re local as well, which is nice,” he said. “We have an office here, so people can come in and talk to us, look at samples or make a payment.”

Fraga noted how some people do not feel comfortable making transactions online, because of the fraud that’s out there.

CMW, which originally started in North Haven, now shares a wooden building with Thai Berry Kitchen. Its walls are painted white, there are displays of roofing tiles and siding samples, and spacious offices.

On Saturday, Uncle Al’s Ice Cream next door provided sweets and a truck from Fire Engine Pizza Co., which is based in Black Rock, served fresh pies from its oven.

Guzman and Fraga said they feel embraced by the town. Town officials helped CMW with the process of opening its office and Giovanni and Lee Hossler, of the chamber, helped organize the grand opening, according to Guzman.

Though the grand opening was held Saturday, the office officially opened last July.

Giovanni said Guzman has a community-oriented business, which is already involved with the Monroe Chamber of Commerce, sponsoring some of its events.

“That’s where the family attitude of this man spills into the community,” Giovanni said, “and he runs a business delivering good products with excellent service and pricing. They go the extra mile to be certified with major manufacturers, who give full warranties to homeowners as a result.”

Gesturing toward Guzman, Giovanni said, “we’re very proud to have him in our business community. He serves as an example of what other businesses are aspiring to be.”

Fraga said CMW’s new Monroe location, at the corner of routes 25 and 59, is centrally located for most of their employees, while situated near major highways such as the Route 25 Connector, the Merritt Parkway and I-95.

Guzman said heavy traffic at the intersection is like “free advertising”, adding he hopes the location will lead to more face-to-face interactions with potential customers who stop by.

“We love this location,” he said.

How contractors can retain labor in a tight market