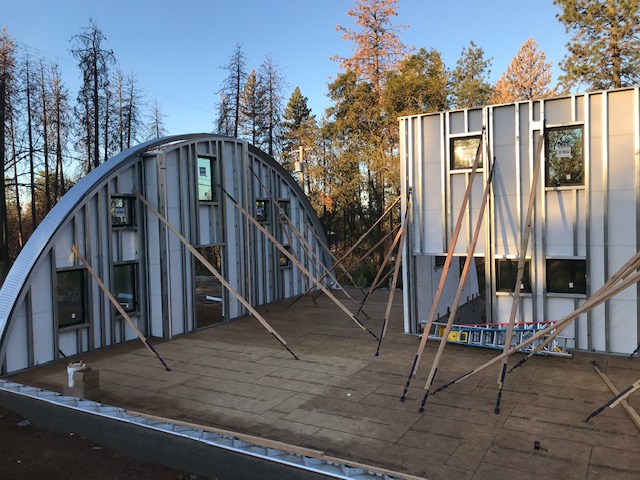 CHICO — A Chico-based architect is attempting to use pre-fabricated, non-combustible, eco-friendly and customizable home packages to help rebuild homes in Paradise and other areas of California where replacement homes due to natural disasters still must be built.

Vern Sneed is the owner and designer of Q Cabin Kits, which aims to replace combustible ply wood, shingles and paper housing materials with structures built out of 90% steel. Sneed said the companies that manufacture the studs, roofing and other steel materials use 80% recycled content in their steel.

Though Sneed began the project in 2010, and sold the first home in 2013, the inspiration for Q Cabin Kits dates back to 1986 when Sneed was an architecture student at the University of Kansas. Sneed said a professor assigned a project to the class where students were required to use a pre-engineered building as the shell. The professor told the class that the students needed to get a handle on that industry or it would take over all of the architecture students’ jobs.

A Q Cabin Kit home is displayed after having its roofing panels installed in August 2020 in Paradise. (Vern Sneed — Contributed)

The idea stuck with Sneed, who said he began thinking of ways to drive down the costs of home building while also driving up the excitement. The windows used have a heavy gauge aluminum frame as well as a tempered glass interior. Sneed said the aluminum frame is important to have since traditional vinyl window framing can melt from the wall and give fire an easy access to the interior of a home. He said with the windows, “it’s going to take a couple thousand degrees for several minutes for something to go wrong with that window.”

Sneed also mentioned the series of troughs on the exterior of the homes, which gather water and funnel it to one point so rain water can be used for agriculture or plant watering. He said the steel exterior leaves nowhere for fire to be sucked into when normal roofing panels may burn, stating that the most vulnerable part of a home to fire is its overhang. The roofing pieces are delivered in arches with a crane and bolted into place.

“This is all about design for me. I have a degree in architecture, and I am in pursuit of design more than I’m pursuing anything else for this,” Sneed said. “When you get down to the level of doing homes, which is a smaller design project from a hospital or some sort, it was kind of exciting to change the materials.”

Sneed said he feared that by turning the homes into a kit that could be built fast it may stunt his creativity, however he said it did quite the opposite.

“I have found no restrictions on my creativity and if anything using these materials has expanded my architectural thinking,” Sneed said.

Sneed, a Chico resident, said he moved to Butte County from Mount Shasta partially because of a need he saw for replacement homes, specifically in Paradise.

“We are trying to get the word out to Paradise that this is a good solution and has some economics to it as well,” Sneed said. “There’s really great grants that are out there, they’re still struggling with how to pay for a replacement up there, and we’re trying to help solve that with price on our units.”

Sneed said permit drawings can be ready in 60 days and in Paradise it is taking approximately three weeks to turn around plans. He said footings and gradings take two weeks and currently there is a three month build time for most structures.

A full list of the types of cabins and structures, along with pricing, can be found by visiting http://theqcabin.com/q-cabin-kit-models/.