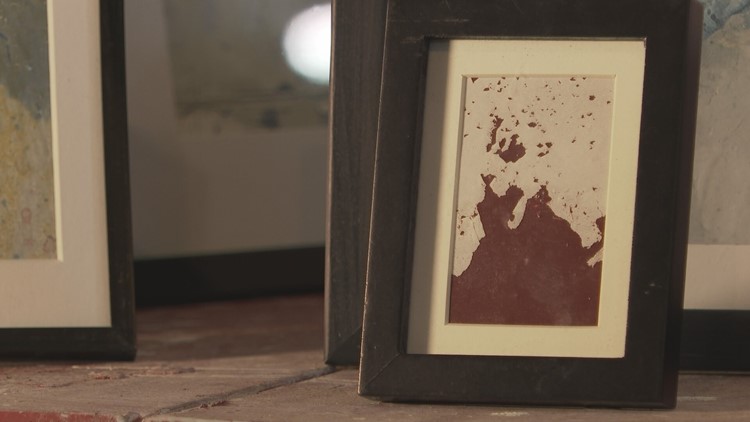 After almost 40 years of painting houses, Mainer John Ater is moving toward a new style of artwork, or as we say in Maine, “aht work.”

MAINE, USA — Last year, Maine native and former house painter John Ater started looking at his used paint buckets a bit differently, and with the help of his social-media-savvy son, stumbled upon an idea that made him go viral.

Ater noticed the designs of dried paint left on the used buckets made a unique design, so he peeled the paint off, framed two sections of it together, and made his first art piece named Ivan and Myron.

If the names seem unrelated, yet specific, that’s because Ater names all of his pieces of art after people he knows or family.

His son Max Ater, who gave him the original idea to frame the dried paint, took a picture of his dad’s work and posted it on Reddit.

“I put it on this page called Damn That’s Interesting…and it got like 60,000 up-votes, which are like ‘Likes’ on Facebook,” Max said. ” When I went to post it, I decided to tell the story of how it happened and that’s what people reacted to the most.”

The post went on to get more than 800 comments with lots of requests to buy the “Bucket Aht,” so the two created MaineBucketAht.com.

One of Ater’s latest sales was to a woman all the way in Ireland.

Ater said he has been in recovery for 33 years, gaining sobriety in ’87 and since then he has been on a path of self-discovery. For him making the “Bucket Aht” is a moment of zen and something that brings him great joy to share with his family and friends.

His next big adventure will be “Tahp Aht,” a wall-sized piece of art from old tarps he uses on job sites.

When he’s not making art, Ater said he does stand-up comedy.

“I think a lot of people feel like they’re going to be embarrassed if they try something new, but I think just go for it,” Ater said. “If you want to try something, give it a shot.”

“This bucket art… some of them are awful, but some of them are pretty good and the reward is unbelievable,” Ater continued. “You get this huge, great reward for creating something out of nothing, that probably would’ve been thrown out in the dump.”