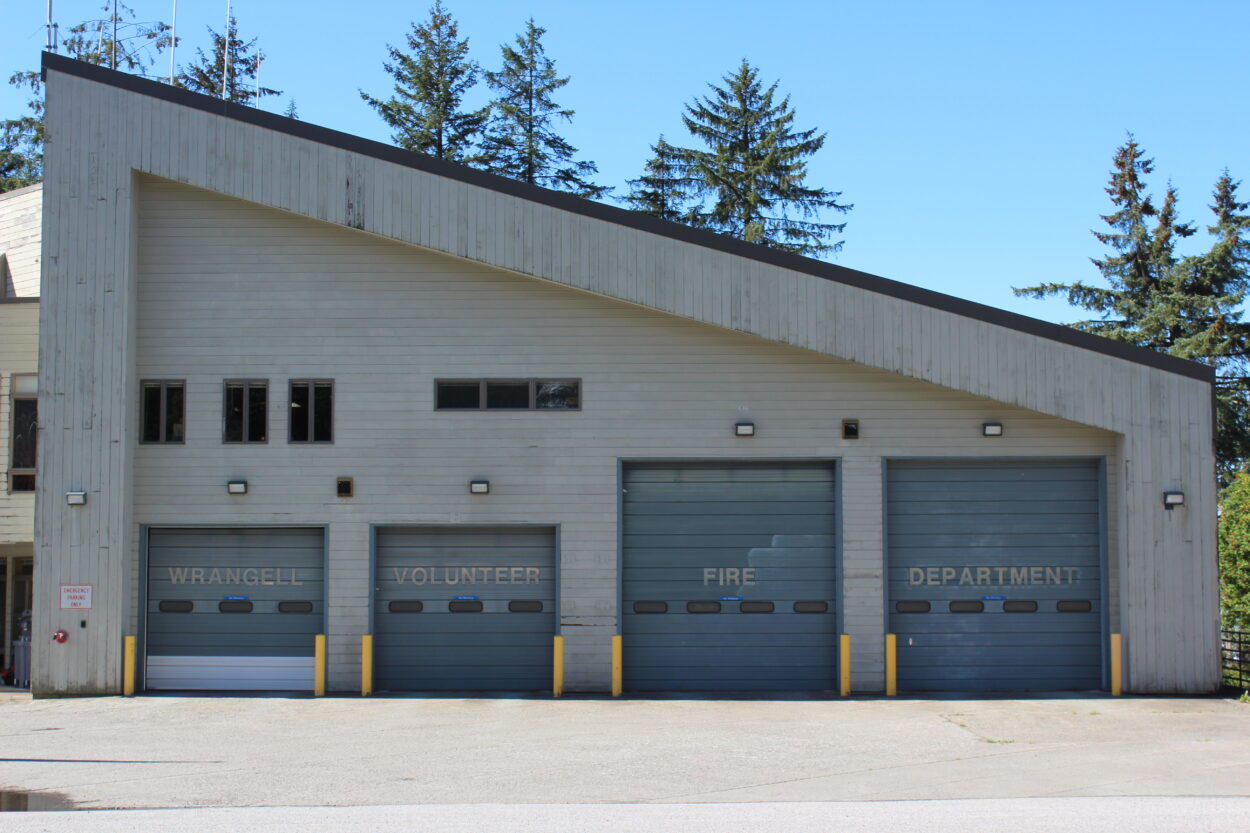 One of the ballot measures would pay for repairs to Wrangell’s Public Safety Building, which houses the Fire Department and other emergency and municipal services. (Sage Smiley / KSTK)

In addition to local candidates, Wrangell municipal election ballots will have three finance-related propositions for voters to weigh in on.

Listen to this story here.

Much of Wrangell’s public infrastructure was built around the same time, in the mid-1980s. Maintenance on many of the buildings has been deferred or done piecemeal for decades, and it’s taken a toll on the structures. To try and address some of the most pressing issues, Wrangell’s assembly has approved two bond measures that would put $12 million towards renovations at the community’s schools and the multi-purpose Public Safety Building.

“The bond is to try to do the siding and the roofing on a 37-year-old building,” explained Borough Manager Jeff Good at a meeting on August 23, continuing: “I mean, typically, your siding and roofing for most houses or buildings, you’re replacing it at 30 to 40 years, it’s about the life expectancy of what the roof and siding are. So [this bond is] trying to get that maintenance done. It’s time, it needs to be done, and the bond is the best way right now to be able to pay for that.”

The school bond would be for $3.5 million, and cover a local 35% match for a state education maintenance grant. The bond for the Public Safety Building – for $8.5 million – would cover similar issues, in addition to addressing some aging mechanical systems.

But the government can’t take on debt without the approval of the people. So both bond proposals will be on the October 4 municipal election ballot.

“We’ve been really brainstorming mechanisms to subsidize these things, so they actually have a chance,” Villarma said, “Because if we don’t, they’re not going to pass, realistically. So we’ve got to try to figure out how we can reduce the burden on the taxpayer as best as we can. There’s several mechanisms for doing that. We have our community assistance payment, we had record sales taxes here – just did it for the audit today, $3.528 million for sales tax, that’s really great. We have our jail contract, it’s hopefully going to come in a bit higher at $195,000, which should go to the Public Safety Building. There’s several different ways to go through.”

Villarma estimated that if both of the bonds passed, the yearly debt payments would be about $874,000, though documents provided to the assembly show the annual debt service could be upwards of $1 million between the two bonds. With contributions from borough sales tax or other funding sources, Villarma said he expected a 5-10% increase in property taxes could cover the payments.

Wrangell’s assembly also amended the ordinances earlier this month (August 8) to make sure any tax increases from taking on bond debt would sunset once the bonds were paid off.

But the other side of the equation – how taxes could increase for individual taxpayers – remains unclear. Wrangell’s assembly recently (August 23) approved a $48,000 contract to reassess every property in town, some of which haven’t been assessed in years, along with another $8,600 to digitize the community’s property records. Assembly Member Dave Powell says that not knowing how much of a change a property assessment could yield is causing concerns in residents he’s talked to. They’re worried the city won’t commit to a hard number, he says.

“They have no idea what their houses are going to be assessed at, and they are worried,” Powell told the assembly. “I don’t know how to do it, how to guarantee the next assembly […] ‘You guys, this is what was said, this is what needs to be done.’ Because the way I look at it right now, if it goes to the vote of the people, and they’re all approved, I wouldn’t want to sit in here if we didn’t do [what we said].”

Even though the borough might not have exact numbers to bring to the voters, Powell said leaders need to do their best to give Wrangell residents a clear picture before the October election.

“I want it to be cut and dry of: ‘This is what we’re trying to do, why we’re trying to do it, and this is our best estimate of what your millage [property tax mill rate] might go to,’” Powell added. “I mean, that’s all we can do right now is an estimate. And then if I’m still here [on the assembly], I’m going to push it down everybody’s throat that, ‘Hey, we promised to get the millage rate down to where you’re only still paying that a much more for your house because that’s what we need to operate on, and two more millage was to pay for these bonds.’”

The ballot measures would only approve taking on the debt. Any changes to the property tax mill rate would be considered separately by the assembly.

While $12 million is a significant amount of money, assembly member Ryan Howe pointed out that it’s just a start towards the infrastructure needs in Wrangell. And it’s a start for building trust, he said.  If the assembly and administration are open and communicative with the public during the process, it will pave the way for future projects, he said.

To keep voters informed, the local government has established a committee to oversee the bond process.

A third ballot measure on the October ballot will ask Wrangell voters whether they approve of the government selling or leasing the old mill site at 6-Mile Zimovia Highway. The borough bought the property for $2.5 million in late June.

There isn’t a specific plan for sale or lease at the moment, but anything over $1 million has to be sent to the voters.

It’s a policy that was put in place years ago and assembly member Powell questioned whether it has kept up with the times. He pointed out that the borough didn’t need voter approval to spend the money – just to sell the property.

“It’s just a question of why we are curtailed into a million dollars when we can buy something for $2.5 million, but we can’t get rid of it,” Powell asked, “Especially if it’s land?”

However, the assembly does not have plans to revisit the voter approval requirement for large land sales in the near future.

The two bonds and the land sale or lease question will be on the October 4 election ballot.