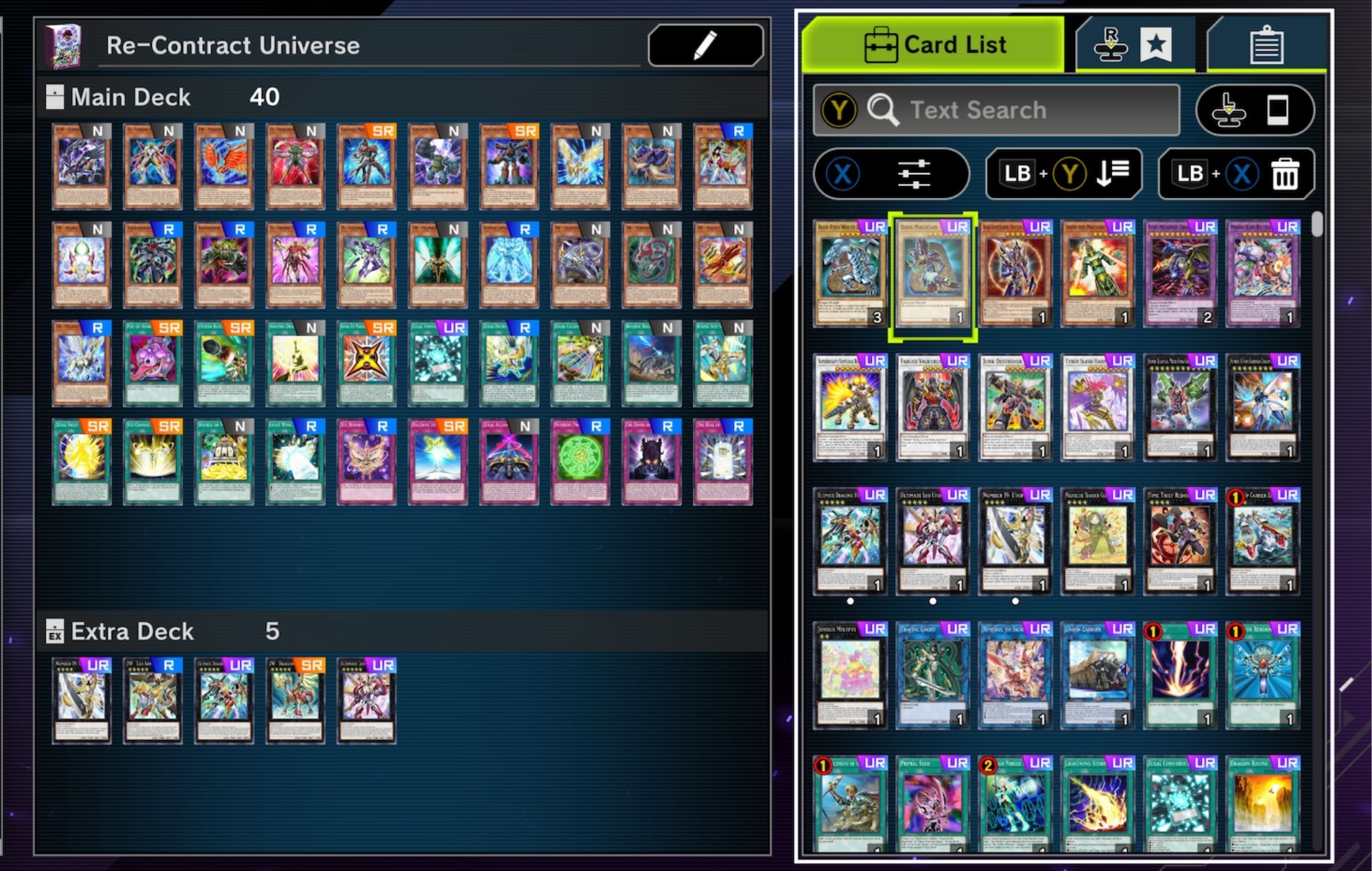 Power creep – where newer and stronger cards are introduced that make previous ones obsolete – is almost inevitable in trading card games. For the Yu-Gi-Oh! TCG specifically, the power creep forces players to adapt to new mechanics of play.

Originally a manga series containing the fictional card game, Yu-Gi-Oh! was then made into a physical trading card game and anime in the late ‘90s and early 2000s. Over the last two decades that card game has been made into multiple video games, received spin-off shows, and had its mechanics and card pool consistently added to.

Players draw monsters, spell and trap cards from a deck, and can place them on the field. Monsters can deal direct damage to life points or other monsters (which have both an attack and defense stat) and spell/trap cards are used to activate lots of different effects to help the player win by reducing the opponent’s life points to zero.”

Yu-Gi-Oh! Master Duel – with over 20 years of history and 10,000 cards – is both understanding and ignorant to the power creep problem. It’s incredibly accessible for long-time TCG players, while being absurdly inaccessible for those new to the game or returning after a break.

Should Master Duel have to bend itself to fit new players? I don’t think so: games like Legacy of the Duelist already make Yu-Gi-Oh! easy to understand for fresh duelists and offer up plenty of single-player content, so Master Duel is free to avoid fully catering to people who’ve never played.

In fact, showing the game’s entire hand immediately – even if it’s overwhelming at first – makes Master Duel one of the most fun Yu-Gi-Oh! games to date. It’s easy to get structure decks and open a plethora of card packs to exchange them for any card you want. Meaning that dream deck you’ve always wanted is at your fingertips.

You can then take that dream deck into various methods of online play, which is the core of the game. Free duels allow you to play in lobbies with strangers or your friends, event duels are for a series of tournaments – none of which have yet started – and ranked duels are traditional online battles.

I’ve played a handful of free duels with friends, and they’re a no frills option for you to test deck ideas and see what others have come up with. Nothing to write home about, but a welcome way to play casually nonetheless.

Ranked duels are the meat of the game, and a completely different story. If you go into these duels and don’t know about each iteration of the Yu-Gi-Oh! card game: from Synchro and Xyz to Pendulum and Link, you’re in for a rough time. As the majority of players in ranked duels will wipe the floor with more casual duelists.

If you’re somewhat new to Yu-Gi-Oh! and push through that initial struggle though, improving your decks and skills as you go, Master Duel can offer some truly nail-biting moments that have you inches from the screen as your opponent makes a move.

Master Duel’s problem is that these edge-of-your-seat battles don’t happen often. If this iteration of Yu-Gi-Oh! is going to let players use all of the cards from day one, it should also present a degree of matchmaking choice, as the variety could lead to duels that cater to more types of players. I’m not asking for Master Duel to simplify itself, just perhaps create rulesets for more diverse game modes, as there’s currently only one.

The solo mode is effective at welcoming newer duelists in, but it feels more akin to a set of card tutorials with deck-building rewards than a fully-fledged single-player experience. There’s a fair amount on offer, but if you’re going into Master Duel for the single-player alone you’ll leave disappointed.

What Yu-Gi-Oh! Master Duel absolutely nails though is the deck building. Considering the combinations of over 10,000 cards would give even the best players decision paralysis, so Master Duel does an excellent job streamlining the deck creation process.

Search filters exist for everything: the basic card type, attributes of monsters, rarity, level, and so on. A “related cards” tab also helps you find all cards linked to a specific one, so finding effective play options is easy. Every single card can be searched for, and ones you don’t own can be viewed too.

Secret packs also offer limited card pools based around archetypes, meaning getting cards that combo together is really simple. They can only be obtained from relevant cards you get in other packs or through crafting, and expire after 24 hours, all of which makes for some weird forced scarcity.

Each card in the game has one of four rarities – with super and ultra rares being the ones that give keys – and you obtain points related to each for playing. These points can then be spent on crafting any card from the 10,000 on offer, whilst cards you get from booster packs can be traded for the corresponding crafting points as well. 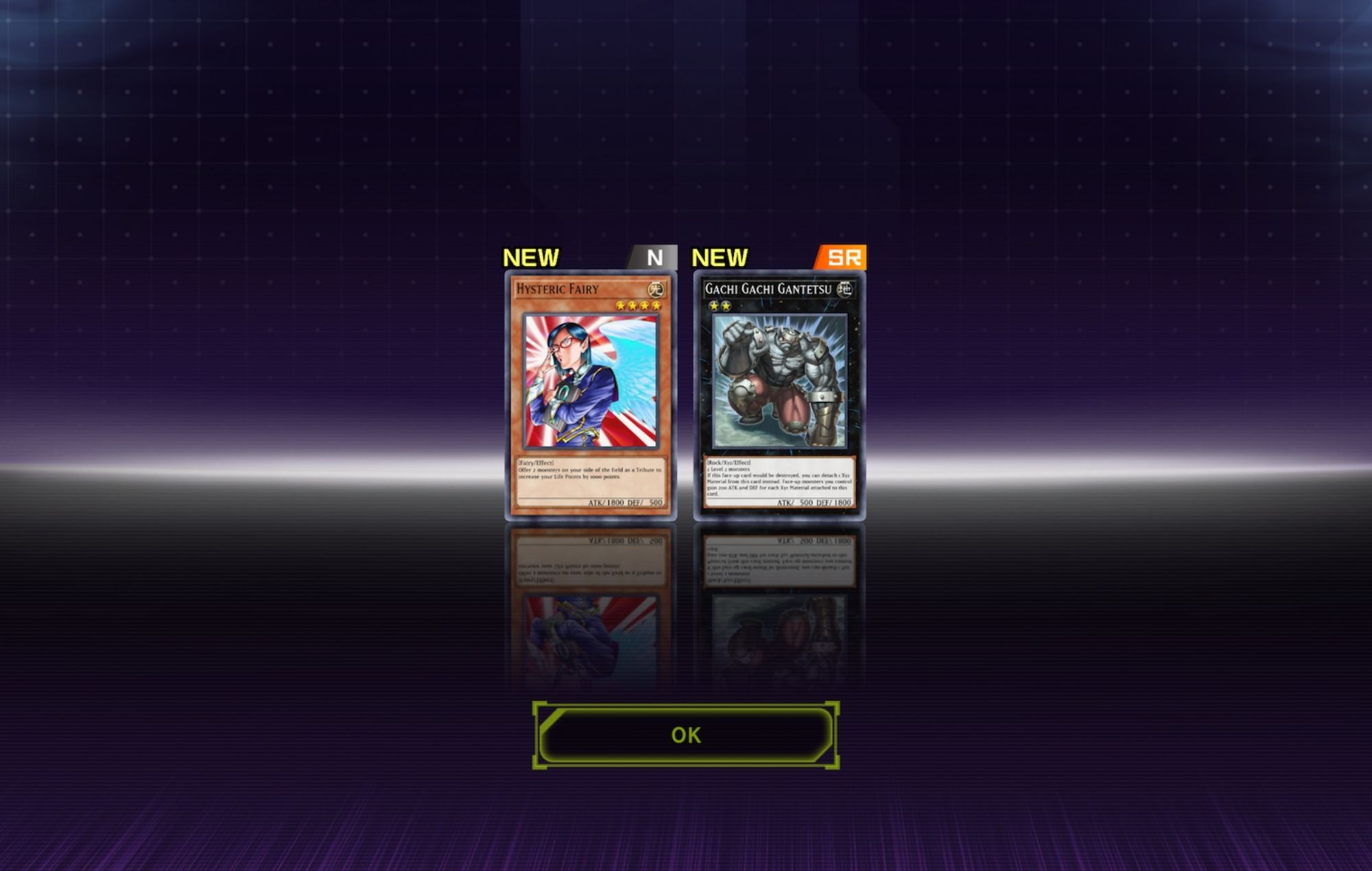 All of these deck building mechanics consolidate the experimentation process, allowing you to find cards that work with ones you already own, and trade for more. This does raise questions of whether or not the game is pay-to-win, but I’ve been dealing with such a surplus of tradeable cards and currency so far that I’ve been able to customise my decks for free.

The only purchasable currency is called “Gems”, which are used to open virtual booster packs, or buy some structure decks and cosmetic accessories. There’s a set of challenges in the game that award Gems, and they can be obtained via single player too. Master Duel – at least at first – is incredibly generous, and seemingly wants to let you experiment as much as possible.

Whether or not you pay depends on how many decks you want on the go. You can house up to 20, and if you went that high you’d definitely have to start spending real money to get packs and trade for cards, at least this close to release.

I should also note that I played Master Duel on Xbox Series X|S after trying it on Nintendo Switch, simply because the Switch version lags both in games and menus at the time of launch. Master Duel has cross-progression though, so I didn’t lose anything. 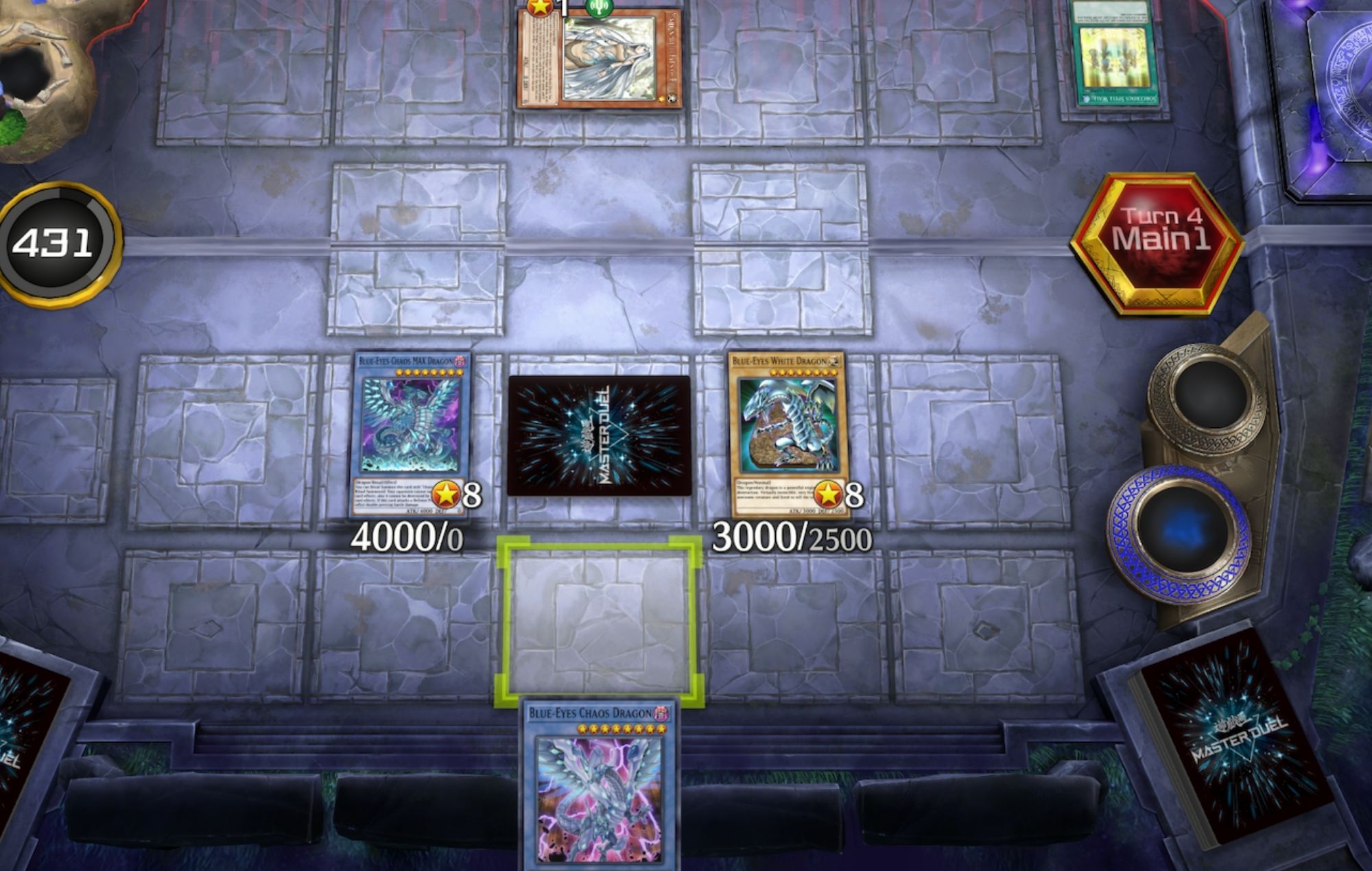 Yu-Gi-Oh! Master Duel isn’t for new fans, but it’s used that to create a robust experience for those who know their way around the trading card game. The ability to easily craft decks and navigate the 10,000 plus cards is an Egyptian godsend that allows for tons of experimentation. That number of cards also creates matchmaking problems at launch though, as it can be difficult to match with someone at a similar skill level.

Master Duel is the pinnacle of the Yu-Gi-Oh! TCG in virtual form. It offers a ridiculous amount of tools to assist in deck customisation, and easily lets you obtain any of the thousands of cards. Where it currently falls short though is the matchmaking options, as there’s just so many variables at play from day one. This isn’t a game for new players, but it doesn’t try to be, so if you know your Blue Eyes from your Kuribo, Master Duel is for you.

Best In Backyards Reviews at Best