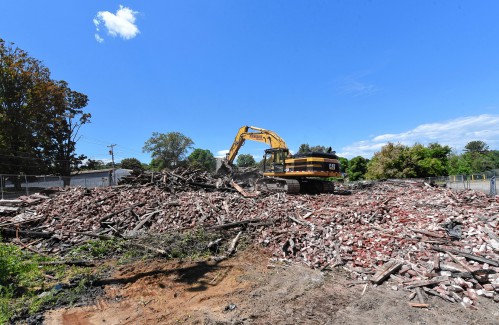 ORANGE — The public is warned the site of the former cereal factory at 16-36 West River St. destroyed by suspected arson on June 4 is considered to be contaminated with asbestos, as are the ashes that fell as far away as Athol and Phillipston.

Prior to the blaze, Orange had contracted with a licensed professional that identified low, regulated amounts of asbestos in the facilities’ window glazing, though there was none in the roofing and no hazardous materials were stored in the interior. Jane Peirce, who chairs the Selectboard and sits on the Board of Health, said shattered windows became commingled with the resulting rubble. She also said people should try to avoid touching the ash, though they should not be overly concerned if they already have.

Peirce explained the state Department of Environmental Protection has a contractor that will visit anyone’s property and safely remove ash, whether it is loose or bagged. Anyone who is interested in this free service should email their name, address and the nature of their problem to Town Administrator Gabriele Voelker at gvoelker@townoforange.org.

“We hope (people) don’t handle it any more than they have to,” Peirce said.

She said she has been in “endless meetings” since June 4 to determine the town’s next steps.

“We are seeking funds from state and federal levels in order to carry out the cleanup of all that debris,” she said Friday morning.

The town was forced in March to close the portion of West River Street from South Main to Pleasant streets because the former cereal factory building was reportedly in imminent danger of failure. Town officials were pursuing an emergency court order to demolish the building and had accepted a bid from Bourgeois Wrecking & Excavation, of Westminster. Peirce said that company has since handled the debris cleanup. According to Peirce, there has been no impact on public or private drinking water.

Three juveniles — whose ages range between 12 and 14 — were identified late on Monday and face criminal charges in connection with the fire. Their names are not being released due to their ages.

In addition to the collapsed cereal factory, vacant buildings at 58 and 50 South Main St. also suffered damage. The vacant former blacksmith shop near 24 East River St. had to be demolished. Orange Fire Chief James Young has said the response from regional fire departments was equivalent to a six- or seven-alarm fire and dozens of departments assisted at the scene or provided station coverage. No firefighters were injured, though two civilians suffered minor burns.

According to Kathleen A. Fournier at MassDEP, her agency responded to the blaze in support of the state Department of Fire Services and the state’s Hazardous Materials Response Team. She said the primary building debris that was observed off site was Styrofoam roofing insulation. She also reported the water quality of the runoff and the Millers River was monitored during and after the fire.

“Observations of the runoff water quality during the event indicated little silt or debris running off the site,” she wrote in an email.

Fournier mentioned some debris, which will be removed as part of the site cleanup, was noted upstream of the power-generating facilities. She also reported no volatile organic compounds, petroleum or various organic and inorganic compounds were detected after screening the runoff and the Millers River downstream of the dame. She also mentioned pH levels are within a normal range.

“One area of runoff adjacent to the building during the event indicated an elevated pH above 6; the pH returned to near neutral levels by 8 p.m.,” she wrote, adding that a small, accumulated sheen of oil was observed on the river, though no area of recoverable product was observed. “There were no observations or reports of fish kills at the discharge of runoff or downstream.”

The state Department of Fire Services conducted air-quality monitoring during the event and concluded there was no hazard to the community, according to Public Information Officer Jake Wark.