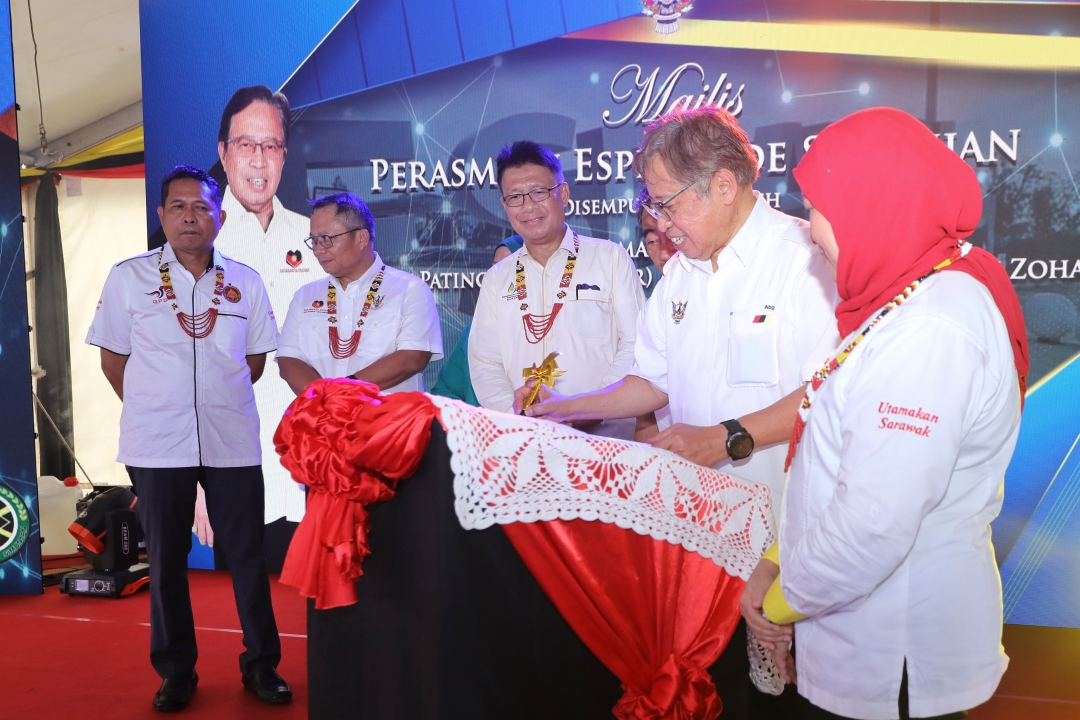 Abang Johari (second right), flanked by Nancy and Julaihi, signs a plaque to mark the official opening of Esplanade Simunjan. Seen from the left are Aidel and Mohamad Abu Bakar. — Photo by Chimon Upon

SIMUNJAN (Aug 20): An additional fund of RM3 million is needed to construct a roof over Esplanade Simunjan and also to beautify the nearby landscape, says Simunjan assemblyman Awla Dris.

He said the esplanade was built utilising funds from the Rural Transformation Programme (RTP) grant for the Simunjan constituency in 2018, of which RM1 million was set aside for the project which reached completion in August 2020.

“However, the original funding under the RTP was insufficient to implement all workscopes of the esplanade project.

“Thus, Simunjan District Council has requested additional funding from the federal Ministry of Tourism, Arts and Culture, for another RM250,000,” he said in his speech at the official opening of Esplanade Simunjan today.

Adding on, Awla said the Esplanade Simunjan project had incurred a cost of RM1.25 million, with the additional works having reached completion in January this year.

“Having said that, Esplanade Simunjan has yet to be fully completed and it is the wishes of mine and the local community that Sarawak Premier Datuk Patinggi Tan Sri Abang Johari Tun Openg could approve an allocation of RM3 million to erect a roof over the esplanade and to beautify the landscape around the waterfront,” he said, to which Abang Johari had agreed to provide the funding in his speech later.

Awla expressed confidence that Esplanade Simunjan, upon full completion, would become the latest iconic landmark of this district.

On another subject, the assemblyman highlighted that the condition of government offices in Simunjan District was no longer conducive to enabling effective delivery of public services to the people, listing the Agriculture, Health, Forestry, and People’s Volunteers Corps (Rela) as the agencies making do with unsatisfactory premises.

“The Registration Department, as well as the Welfare Department and Community Development Department still have offices at the old Simunjan District office’s building.

“Some civil servants here have been forced to rent spaces outside their government offices just to have a condition more conducive to working.

“I hope the Public Works Department (JKR) could discuss with the state government on building a multi-purpose government building in Simunjan District to resolve the current predicament faced by the civil servants here,” said Awla, pointing out that a potential site had already been identified at the new township here.