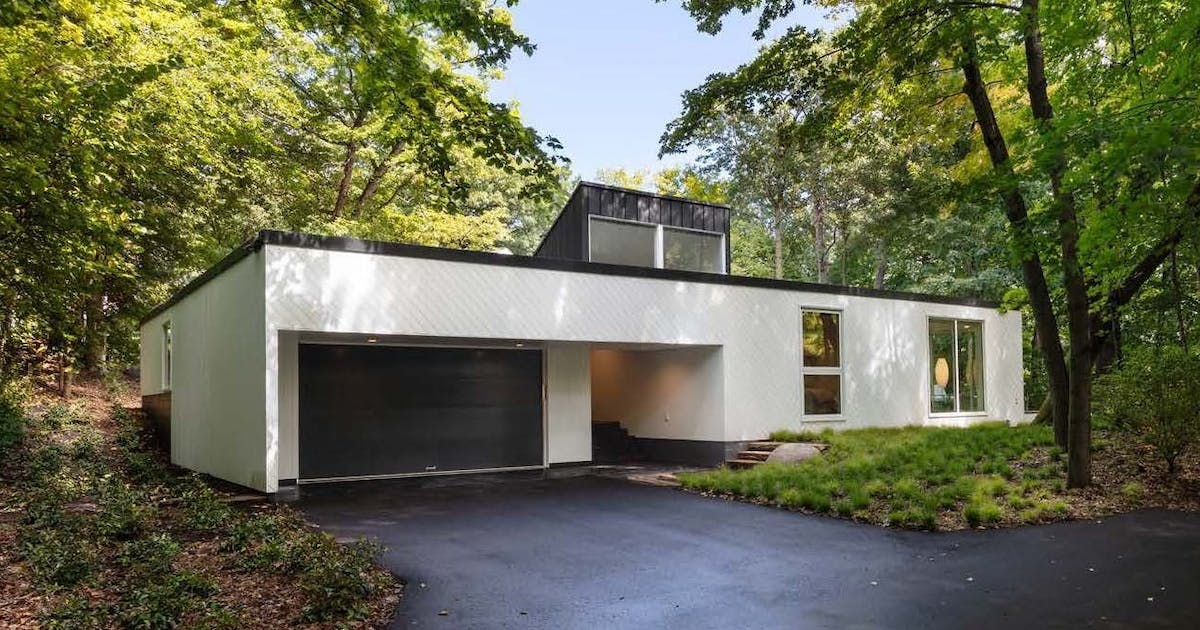 But for a 1977 Minnetonka home by modernist titan Ralph Rapson, Stinson made an exception.

“When it comes to remodeling, we’ve been very selective about getting involved,” he said. “They’re not efficient, they’re messy. But this made sense. The house is such a pure form, and it was done with such integrity and thoughtfulness. It’s a jewel.”

All of those qualities were not lost on the house’s new owners, Alex and Matt Crnobrna.

“The house was absolutely exquisite to begin with,” said Alex. “We wanted to retain the integrity of Rapson’s vision and just kind of modernize it a bit.”

Accomplishing that goal was made easier by the project’s deeply layered personal connections between past and present.

Rapson, who was the head of the University of Minnesota’s School of Architecture for 30 years, was a teacher and mentor (“a total architectural hero”) to Stinson. The prolific and influential Rapson, who died in 2008 at the age of 93, was also a friend of the house’s original owners, Gloria and Vernon Tew.

Alex grew up four doors away, in a Charles Stinson-designed house. Her parents, Shari and Todd Fleming, still live there.

“The whole process just felt really natural,” said Charles Stinson. “There were just so many parallels.”

It was Alex and her mother who were immediately entranced by the house’s uncomplicated splendors. While walking their dogs they spied a small “For Sale” sign and immediately set up an appointment.

Stepping just inside the front door, they were transfixed by a central, atrium-like space. Its soaring, angled ceiling culminated in a pair of enormous side-by-side rectangular windows that nearly everyone — although it’s unclear about Rapson — referred to as “the Honker.”

“We’re photographers, and light is everything,” said Alex. “The natural light was just pouring in, it was like God’s rays coming through the windows. It was magical, and I was instantly, madly in love.”

There was another draw. Gloria Tew was a sculptor — her 15-foot stainless steel “Reflections” greets visitors at the nearby Minnetonka Civic Center — and had Rapson include a studio in the house. That spacious, airy workspace is now home to the photography business that the mother-and-daughter duo have shared for 16 years.

Early on, the Crnobrnas made an important decision: Rather than building an addition, they would retain the modest two-bedroom/two-bathroom layout.

“We love the simple footprint,” said Alex. “This structure makes sense for our lifestyle. The house makes you embrace a minimalist way of life, it begs you to ask yourself, ‘What do you really, truly need?’ It keeps you organized — we’re very tidy people — and it helps you avoid purchasing anything extraneous.”

“It’s because they were willing to not make the house bigger,” he said. “You have to spend more per square inch to save something small. They went all in, and they were so receptive to respecting Rapson’s genius.”

Still, Stinson did perform a few surgically precise tweaks that cater to contemporary living practices yet embrace the house’s built-in aura of understatement and serenity.

The biggest change involved the conversion of two small screen porches into enclosed spaces, a move that expanded both the kitchen and the living room.

The kitchen was the recipient of the project’s most dramatic overhaul. Rapson’s cramped, windowless format — it was more kitchenette than kitchen — was updated into a roomy, functional, heart-of-the-home blueprint. The all-white color palette was retained, a skylight was added and the careful removal of an interior wall opened the kitchen to the rest of the house.

“Rapson’s design was simply and purely engineered, with a very efficient use of materials,” said Stinson. “It could have felt like a small space, but when it all came together, all of a sudden it was all very efficient. It felt so great, so spacious. Instead of building a big barge, we were re-creating a beautiful sailboat.”

To further emphasize indoor-outdoor connections, a wall of glass now runs the length of the back of the house and opens to a new deck. Rectangular and spare, the deck has an always-been-there look, and is built with thermally modified, light-grained ash wood.

Carpet was replaced with similarly monochromatic white oak flooring, and the atrium’s floor went from rough aggregate concrete pavers to a smooth gray stone. The exterior’s original redwood siding held up well over the years, but if any replacement was required, Jason Stinson relied upon salvaged redwood from the meticulous demolition of those two small screen porches.

With the exception of “the Honker,” all of the windows received energy-efficient triple-pane replacements, a major investment given that many stretch from floor to ceiling. The house’s electrical, plumbing, heating/air conditioning and security systems were also updated.

“Everything is smart, and it runs on our cellphones,” said Matt Crnobrna. “Which is pretty awesome.”

The low-maintenance landscape — it’s the work of Michael Keenan of Urban Ecosystems in St. Paul — accentuates the wooded site and the house’s connection to the outdoors.

“It’s really beautiful,” said Matt. “When the leaves come out, all of our neighbors sort of disappear. When the colors change, it’s like a painting. Living here is like living in a treehouse, because you feel like you’re right there with nature.”

The house was a major crowd magnet on a recent AIA Minnesota’s Homes by Architects Tour.

“It really brought out all of these Ralph Rapson fans, and they were all so grateful that the house had been saved,” said Stinson. “They would come in, and they didn’t want to leave. That interest and enthusiasm was really neat to see, and I hope that it will be an inspiration for other architects and clients.”

What: A thoughtful renovation of a Minnetonka residence designed in 1977 by master Minnesota architect Ralph Rapson.