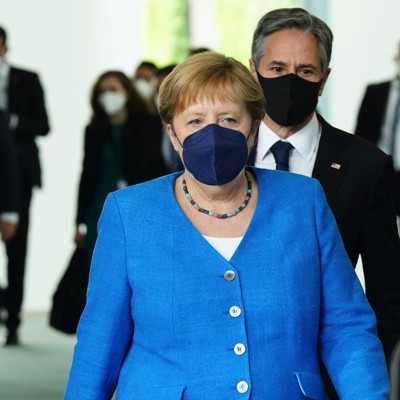 German Chancellor Angela Merkel’s visit to the White House on Thursday could be one of the last chances for the United States to address some of its biggest issues with a top ally in the near term, experts warn, including how to confront a rising China.

Merkel is meeting with President Joe Biden for what the White House is calling a “working visit” on what is likely her last trip to Washington before she leaves her position in the Fall. Experts are not expecting a significant foreign policy shift when Merkel leaves office, but whoever takes her place will lack the international experience and relationships Merkel has built over the last 16 years as chancellor, meaning any major breakthroughs on the issues plaguing the bilateral relationship are unlikely in the short term.

“There’s a window of opportunity from the 21st of January until the 26th of September—from Biden’s inauguration until the German Federal Elections—for Germany and the United States to really reset their common agenda,” said Steven Sokol, president of the American Council on Germany. “One of the reasons why I’m concerned about this closing window is because regardless of who is elected as chancellor and what sort of a government is formed, that person will have a very steep learning curve.”

There are two leading contenders to replace Merkel, according to multiple experts. If Armin Laschet wins, he is expected to largely continue current policies as a fellow member of Merkel’s Christian Democrats party.  Greens party candidate Annalena Baerbock, has been more vocal about her desire to implement change and “a fresh start.”

The German political system’s checks and balances may keep policies from swaying too far no matter who wins, said Hans Kundnani, a senior research fellow at Chatham House’s Europe Programme.

“Merkel may have gone, but the consensus still exists,” Kundnani said.

But German leaders may not be able to focus on transatlantic relations at all for some time. In the past, it’s taken months for a new government to stand up after a German election, so some experts speculate there won’t be a new chancellor until early next year. And no matter who becomes Germany’s next leader, Sokol predicted, he or she will be more focused on German issues, particularly the ongoing pandemic, just as Biden was in his first months in office.

“I think any new chancellor is going to be inwardly focused at first and that foreign policy will be ancillary,” he said. “It will be a period where it would not be surprising if there was little movement [and] little progress on issues other than things that flare up as emergencies.”

The German transition may even slow U.S. discussions with other European nations if Merkel’s departure leaves a leadership vacuum, Sokol said.

“The kind of experience that Merkel has gained as…Germany has become a more confident global player during her tenure in office, that’s something where we might see a little bit of a hiccup, because each of the two people who are most likely candidates just don’t have as much experience in international affairs and international politics.”

During Merkel’s visit to Washington, she will meet with Vice President Kamala Harris for a working breakfast, according to a senior administration official. The German chancellor will then meet with Biden at the White House, where the two will also host a joint press conference. In the evening, Biden will host a small dinner for Merkel, the official said.

The biggest foreign policy issues to be discussed at the meeting include the Nord Stream 2 natural gas pipeline with Russia and Germany’s close economic ties to China, as well as other security challenges in Afghanistan, Libya and the Sahel region of Africa, the senior administration official said.

Nord Stream 2, which is expected to be completed next month, is a natural gas pipeline under the Baltic Sea that will deliver Russian gas directly to Germany, undermining Ukraine’s role as an important player in transiting energy to Europe. Merkel this week reassured Ukrainian President Volodymyr Zelenskyy, who is expected to also meet with Biden in Washington this summer, that his country will “remain a transit country” even once the pipeline is done.

The Biden administration does not support the project, in part because it fears the pipeline will make Europe more dependent on Moscow. Regardless, the White House waived sanctions on the project in May, which gave the administration “diplomatic space” to work with Germany on reducing the pipeline’s unwanted effects, said the senior administration official, who added that there are unlikely to be any concrete solutions announced after Biden’s meeting with Merkel on this issue.

The leaders will also discuss how to approach a rising China, the official said. China has been Germany’s top trading partner for five years, while Pentagon leaders call the country their top threat.

Biden tried to sway European allies toward a more aggressive stance against China during meetings last month with NATO and G7 leaders. If he can persuade Germany, other allies may follow, said Daniel Kochis, a senior policy analyst for European affairs at the Heritage Foundation.

“The success of U.S. policy is in some ways linked to our success in getting European allies to view this issue the same way as we do,” Kochis said.

The meeting may also help heal rifts exacerbated by then-President Donald Trump, who called Merkel stupid and threatened to withdraw troops from Germany.

“Biden is playing a healing role in terms of reminding Americans of how we benefit from NATO and the bilateral relationship with Germany,” said Bradley Bowman, senior director of the Foundation for the Defense of Democracies’ Center on Military and Political Power. “America’s best military bases in Europe are in Germany. The best training facilities are in Germany. The military presence in Germany allows us to conduct operations in the Meditarrean and Middle East….It would have been very difficult in Iraq and Afghanistan without Germany.”

Afghanistan is just one area where the United States and Germany, which just brought the last of its troops home last month, have worked closely on national security. The nations also cooperate on counterterrorism operations and nuclear nonproliferation work through NATO. About 36,000 active-duty American troops are stationed in Germany, which hosts U.S. European Command, U.S. Africa Command, and the Joint Multinational Training Center. Some 500 were added this year when the Biden administration ended cuts to the U.S. military presence in Germany proposed by Trump.

How to choose the right fireplace for your home