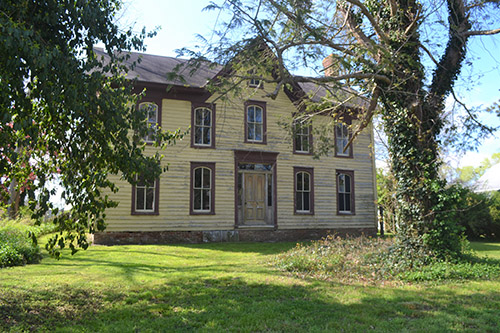 Renovations totaling $10,000 to the Pitts House, located on William Street, will be eligible for reimbursement through the grant. Photo by Charlene Sharpe

BERLIN – An iconic Berlin home is expected to receive some much-needed attention with the help of a façade grant.

The Pitts House, located at 201 William St., has been approved for a façade grant for replacing glass windows and repainting. The structure, which has been vacant for decades, represents a significant piece of historic Berlin. Though there’s been talk of demolishing the house, community members have long hoped it would be refurbished.

“It’s a beautiful structure,” said Ivy Wells, the town’s economic and community development director. “The brick behind it is some of the oldest brick in Berlin.”

Wells announced at last week’s meeting of the Berlin Historic District Commission a façade grant application for some improvements at the house had been approved by the Maryland Historic Trust. According to the application, the work to be completed includes replacing glass windows, painting the exterior of the house and restoring exterior finishes in the courtyard area. Though Wells has been working with Garrett Neeb, whose family owns the property, on the application for some time, the town only recently received additional façade funding from the state.

“I’ve been working with Garrett Neeb on this for several years and I’m excited that that house is going to get fixed,” Wells said.

The façade program, which is a matching grant program, allows commercial property owners to be reimbursed for up to $10,000 when they make approved improvements to the exterior of their buildings. Wells said the quote submitted for this project was for more than $20,000, so it will be eligible for a $10,000 grant.

She pointed out that only commercially zoned properties were able to get façade grants.

“That entire area is zoned commercial,” she said, referencing the house and Artisans Green area.

When contacted this week, Neeb said the priority was getting the house painted.

“All we’re focused on right now is just repainting the house,” he said. “We don’t have any additional plans to share at the moment.”

When asked about the windows, Neeb said the window sashes would be repainted and re-glazed.

The Pitts House, built in the 1830s, is one of the early Berlin homes highlighted in Paul Touart’s “Along the Seaboard Side,” which details the architectural history of Worcester County.

“The news of the façade grant for this home of huge significant importance to the Town of Berlin was the answer to my prayers of many years,” said Carol Rose, chair of the Berlin Historic District Commission. “The preservation of the home is important to me personally, as I can clearly remember, as a child, how lovingly Mr. Pitts maintained the home and grounds.”

She said the home was interesting in that its original columned porch was moved to face William Street in the 1870s.

“The porch, gone now, was crafted in the same manner as the surviving porches at Burley Manor and Burley Cottage,” she said. “Evenings after supper in the warm months of the year rocking on our front porches was a mainstay of growing up in a small town during the 1950s.”

Rose, whose father was good friends with William D. Pitts, said the original brick portion on the rear side of the house is thought to be the oldest part of any home in Berlin.

“At the time of construction, the home was located on what was then considered the outskirts of town,” she said. “Berlin only had a few shops and houses.”

In addition to the house, the Pitts family left other marks on local history. The contents of Pitts’ surveying office were donated to the Calvin B. Taylor House Museum while his collection of nearly 20,000 land survey records, dating back to 1677, make up a collection at the Worcester County Library. The museum also has the transcript of an extensive interview once done with Pitts regarding Berlin’s history.

“This home, the residence of four generations of the Pitts family beginning in 1830, is ready for a renaissance,” Rose said. “I am confident it is in good hands with the stewardship of Garret Neeb.”